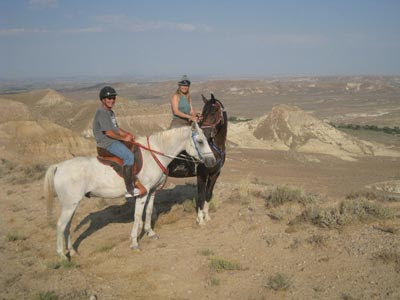 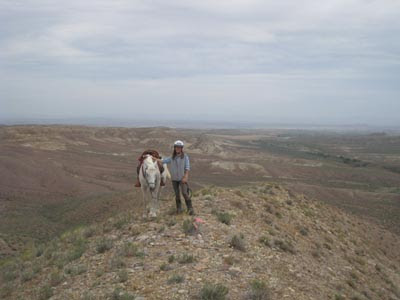 Pikes Peak, one of the best-known 14,000' peaks in Colorado (but only the 30th highest), was around a looooooooong time before it got named after Zebulon Pike, who first tried to climb it in 1806. Of course, that's not counting any Indians, who likely climbed it long before then, and ignoring the fact that the Ute Indians already had a fine name for it, Tavakiev (Sun Mountain).

What's it take to get at least a trail around here in Owyhee named after ME? Well, all it took was going and raking it for an endurance ride. My trail is at the end of Pickett Creek Canyon. You'll be coming down it on two of the days of the Owyhee Canyonlands (and notice the absence of rocks when you do!)

I've taken to naming a lot of the trails around here. Makes it easier than, "Let's take that trail over that way..." "Which one?" "You know, the one down there where the trails fork..." "Which trail fork?" "Well the one after that little hill..." "Which hill?" "Well, the one before the draw..." "Which draw?"

There are: the Training Wash (basic uphill sand wash for getting out of shape horses started back), Brown's Creek loop (in the Brown's Creek drainage), the Tevis Trail (20 yards of a steep narrow trail that leads out of here), the Rim Trail (our most scenic trail, on which we only take people we really like and who will really appreciate it), Hart Creek (the other really scenic trail we only take people we like on, or people who can sit in the saddle a long time, or people who don't get nervous on knife edge ridges - though really, it's not that bad), Blond Cow Wash (a blonde cow was in it once), Dog Trail (which goes above Linda's house), No-Dog Trail (to avoid the dogs from Linda's house on Dog Trail), Tamara's Hill (the first hill Tamara conquered here on horseback), the Badlands Loop (hills that look like the Badlands in South Dakota), the Bilbo Baggins loop (I rode Billy, a cute little hobbit-like horse on this trail), the Frodo Baggins wash (a secret branch off the Bilbo Baggins loop that we hope no motorcycles ever discover!), the Candelabra Gate (which is one way to get to the Bilbo Baggins loop), and so on.

So now, when I say "Let's do the 3 Cheese Layer ride," everybody knows it means to go out the Tevis trail, take the Training Wash up, cross over and take Spring Ranch Road Wash down, take a left at the Water Tank Crossing, and at Four Corners turn left up Blonde Cow Wash till you get up on Steph's Ridge and head home via the Training Wash crossing and Tevis.

They might not show up on any Topozone or Google maps, but at least everybody around here knows the trails I'm talking about. But we'll give you maps at the Owyhee Canyonlands endurance ride, so you don't have to memorize all my trail names before you ride.
Posted by The Equestrian Vagabond at 2:37 PM