Save a Logger, Eat an Owl 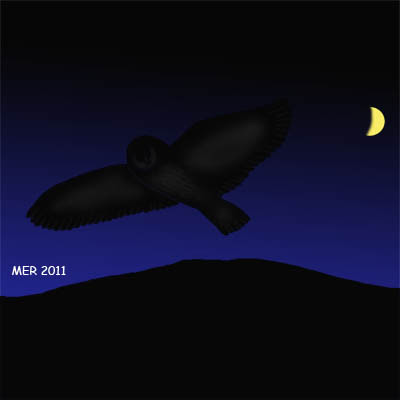 Outside, the 3/4 moon is bright, reflecting off the snow burying the meadow. The surrounding woods are darker than black, hiding whatever wishes to be hidden. It's so still I can hear the horses munching on hay 50 yards away on the other side of the barn. Not a hint of a breeze moves the pine needles. I've got the three little dogs outside (one on a long leash). We are looking, listening to the sounds of the mountain forest at night.

And then from far down the canyon I realize there is a rhythm to the soft sounds I'm hearing. It's an owl - a barred owl!

I always think of spotted owls when I'm in the forest. Years ago I did spotted owl surveys, tromping around in the Pacific Northwest forests at night, searching for them, recording their steadily declining numbers. Out of habit (and hope, always hope) I look for them in every forest I'm in; I look for them here in this corner of Montana, even though the habitat doesn't suit the spotted owl. Around here, this is a logged forest, second- and third-growth trees where trees are still standing. No old growth forest that the spotted owl needs.

That barred owls would be here never occured to me only because it's been so long that I've heard one.

In 1990 the Northern subspecies of the spotted owl - which lives in old growth forests in the Northwest, from British Columbia to northern California - was listed as an endangered species. Because of that, logging in the Pacific Northwest on federal lands was all but stopped and was reduced by almost 90% by 2000. Jobs were lost, though the logging industry had already been in decline since World War II. Automation of the industry had already been stealing jobs for decades. Machines replaced the men that used the shovels and pulaskis to build roads, the men that used the saws and axes to cut and fall and load trees, and the men that drove horses to transport the logs. Machines replaced people in the sawmills. Society, and corporations, hail automation as progress. In the logging industry (as in any industry), it meant job losses. Perhaps the spotted owl was to blame solely for logging woes; perhaps it was a scapegoat.

Spotted owls were allegedly eaten at barbeques. You can still come across the "Save a Logger, Eat an Owl" bumper stickers on old vehicles. You still don't walk into a bar in one of those old Northwest logging towns and start chirping away about the environmental benefits of conserving the cute fluffy, endangered spotted owls you have left in your neck of the woods.

Then there's the barred owl. A little larger than the spotted owl, more aggressive, and not needing strictly old growth forest to live in, it's another reason the spotted owl is in trouble. They are cousins in the bird world; both are of the same genus, Strix, and rarely, they interbreed, resulting in a sparred owl. (I located one of these once on my owl job.) Barred owls moved from the eastern US to the west over the 20th century. In many historic spotted owl nesting sites in the Pacific Northwest, the barred owl has taken over.

Now, this night I hear a female barred owl down the canyon. I answer its call. In five minutes, she has flown further up-canyon in my direction. I am thrilled to hear her. She continues to hoot her 8-note call, and in another five minutes, she is closer, hooting from only a quarter mile away.

I am mesmerized by the call, by the fact she is answering my call. She's probably looking for a mate; it's that time of season. I have heard many barred owls, but I have never actually seen one, even though they have been close enough I could have hit them with a rock. I've jumped out of my skin and nearly had a heart attack before, when one has flown in silently in the dark and suddenly screeched an unearthly howl right above me. But I've never laid eyes on one.

I call once more, and suddenly, zeroing straight in on my call, she flies directly at me, 30 feet above me into the nearest tree. Oh my God!

It's so startling, she scares the leashed dog, who starts barking; and the second little dog takes off barking directly at her! Oh, crap!

I come to my senses and quickly reel the leashed dog in and grab her and throw her in the house. (I've already thrown the littlest dog-morsel inside.) Meanwhile the barred owl now starts hooting her territorial call in the tree above, loudly, insistently.

I'm hissing at the remaining barking little dog to get back here before the owl takes her, but oh, no, she's going to get that owl. I don't want the owl to get scared away, but I don't want to provide her a meal, either. It's chaos in the once-quiet forest: thundering hoots, piercing yips, and angry hissing human voice.

The owl is agitated by the noisy brazen barking meal-on-legs, and flies 15 yards away to another tree. Fierce Little Dog takes off after her, completely ignoring me. AHHH!

I run in the house and grab dog food in a can and run back outside and shake it. Thank goodness Fierce Little Dog is also a Fierce Little Hog, because she comes running back for food, and I grab her and chuck her in the house.

I run back outside and listen to this barred owl who continues her territorial call. For half an hour, I stand motionless and silent in the snow under the moonlight, listening to this booming melodic call of this beautiful wild creature as it echoes around the meadow and back down the canyon. I apologize for disturbing her... but forgive me - I'm selfishly glad I did.

And since there probably isn't a spotted owl for miles around anyway due to lack of habitat - I am thrilled with the encounter.
Posted by The Equestrian Vagabond at 1:02 PM

You are a great writer and photographer, Merri. I am always glad to see a new entry on your blog.