2011 Scottsdale Arabian Show - And Then I Met The Fireman Today it was almost too much to comprehend: the sparkles and spurs, the startled eyes, the chins touching the chests, the knees snapping up high and touching the nose, the necks arched high and thin and eyeballs reaching for the sky, the plastic bag chasing the youngsters entering the ring. I think that in the halter classes, the horses are supposed to trot beside or around their handlers - but everybody likes it when the horses are naughty. They whistle and whoop and pound on metal trash cans and whack the steel girders, and they WOO WOO WOO! when the horses do anything but trot. 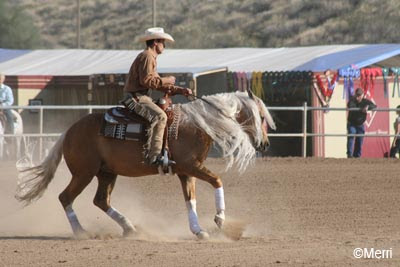 And then I met the reiners. Yesterday I ran into Susan Bavaria, the managing editor of Modern Arabian Horse. She asked me if I could come to a reining barn and take a few pictures today.

And then I met the Fireman.

VLQ Friendly Fire +// isn't just any reining horse in trainer LaRae Fletcher-Powell's Silver Aspen Ranch barn. In a sport where, I was told, (over a catered hors d'oeuvres with drinks), most horses are done with their reining careers after maybe 5 or 6 years of age, "Fireman" is still sound, and still going at 11. And he's still going strong. He's the only full Arabian to win both the Amateur and Open divisions at Canadian Nationals and U.S. Nationals in the same year, in 2009.

In 2010 he won the Amateur and Open divisions at the Canadian Nationals, and the Amateur division at the US Nationals; and, today, here at their barn, Fireman and owner (and amateur rider) Allison Mostowich were presented with the Legion of Excellence Award, and the WAHO (World Arabian Horse Organization) trophy. Also present were his breeder Vanessa Quartly, and his first owners Kevin and Nadine Cusack. Vanessa breeds her horses for performance - dressage, hunter, sport horse under saddle, and reining. I told her I rode endurance, and she said she sort of accidentally did a 25 mile endurance ride on one of her dressage horses who wasn't at his fittest at the time - and he breezed right through it. If Fireman is representative of what Vanessa breeds, her Arabians could excel on the endurance trail also.

Fireman can have a bit of an attitude in the arena (sometimes it's "his own agenda" LaRae said), but he sure didn't show it posing for pictures. He stood like a bored nag used to all the attention, and only pricked his ears when someone teased him with a baby carrot from the catering table. That the horse is well cared for and that everybody is in love with him is obvious. He's in both the Open and Amateur classes at the Scottsdale Arabian Show; I'll try to catch him running a reining pattern tomorrow with LaRae, and Friday with Allison.

Oh, and except for LaRae who lives in Auburn, Washington, they're all Canadians, eh?


Many more photos here:
http://www.endurance.net/international/USA/2011SAS/
Posted by The Equestrian Vagabond at 9:21 PM