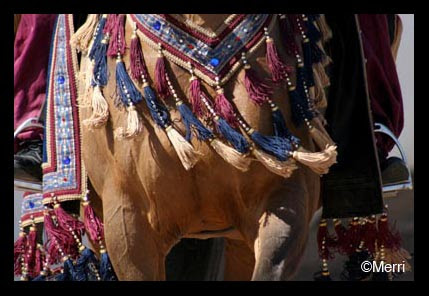 Most endurance riders aren't particularly known for dressing up in the saddle. We have other things on our minds, like correct saddle fit over 50 miles, the right boots (our horses and our own), to biothane or not to biothane.

Long ago my trail riding friend was rather appalled I didn't have a 'color.' She insisted I go with one, so I chose red - one of my Thoroughbred Stormy's racing colors. I have to admit, he does look mighty fine decked out in red polos, red saddle pad, black and red bridle, with red saddlebags matching my black and red tights, shirt, and chaps, though I've only gone to that extreme 'costume' maybe twice in my life. Or maybe it was just once, just for pictures. I don't know what happened to the pictures.

Fashion and bling is the name of the game at the Scottsdale Arabian Show. The dressage riders are neatly attired in their required 'costume', and their horses' manes are neatly braided. Western pleasure riders have the bling blouses that blindingly sparkle rainbow colors in the sun. I haven't raided the shopping tents yet, but I did see the price of two sparkly tops, one for $900 and one for $1500. I also saw some glitter on a bathroom floor... I wonder if this came from one such top? If so that was like gold dust. 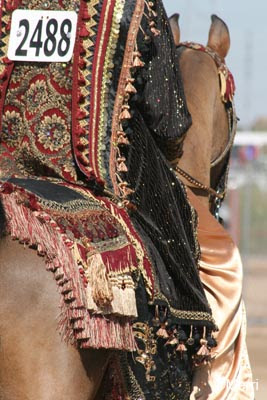 But nothing outshines the Native Costumes. They are almost fancy enough to make an endurance rider want to take up Arabian Mounted Native Costume competition. They're gorgeous. There were only 4 riders in today's single Anglo-Arabian Mounted Native Costume class; as one previous reader mentioned, it was fun watching them in their high stepping hand gallop around the arena to the Arabian dance music. A couple of the horses knew exactly how to sashay and make their tassles swing and swish back and forth. One horse's knees almost came up to his eyeballs as he trotted around the ring. Fantastic fun! The biggest disappointment of it all is that the costumes classes are held under a dark, covered arena. No chance for the bling to sparkle. (Same with the western pleasure.) Come on - put these classes out in the sun! 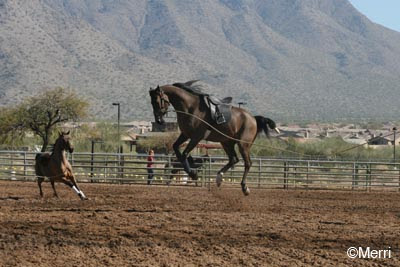 One can expect most of these show horses live in stalls (certainly while here at the show) and, like racehorses, they only get out once a day to work and cool down. One would also expect they're fed a lot of grain, so when they get out, they have a lot of vroom to blow off.

This Anglo-Arab was feeling terrific. He could get some air. And he did it a lot. He had the high knee action - is this partially natural, or is this the heavy wedged shoes he wears?


And many more entertaining photos (including the boinging lunger) here:
http://www.endurance.net/international/USA/2011SAS/index.html
Posted by The Equestrian Vagabond at 5:55 PM