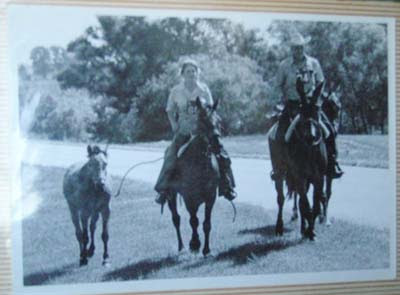 Some people were converging at the starting line in Frankfurt, New York, on a race across America, 99 days and 3200 miles to California.

It was the brainchild of Randall Scheiding, a then-33-year-old self described "gambler" and "free spirit."

After finishing high school in Illinois, Scheiding went to college, hitchhiked around the US, joined the US Air Force, and worked as a broadcast teacher at a community college.

He put an ad in Western Horseman and got 650 replies, and there was no turning back from there. He spent over a year organizing it and raising money to put it together, always working toward making his dream come true.

Charles Waggoner joined Scheiding as co-founder of the race, working on recruiting riders from around the world and overseeing legal matters and sponsorships. Chuck considered the race a great challenge, "pioneering an exciting new concept in horse racing," and "a way to pay homage to the animal which has played such a vital role in the building of this nation.

"The race will provide Americans with an opportunity to experience their land from a different point of view - from the back of a horse."

It was a most outlandish and huge undertaking - and this in the days before the BLM and Forest Service required a now near-impossible stack of permit paperwork before traversing public lands - to organize and map the route and find campsites and secure equipment, organize the veterinarians and checkpoints and rules, and deal with entrants.

Festivals and parades would greet riders along the way, and a total of $50,000 in prize money - with $25,000 to the winner - would be waiting at the finish in California.

With a $500 entry fee, they came from the 32 states in the US; from Canada, Germany, Austria (a Count), France, Switzerland, Iceland and Australia, from 17 to 70 years old - 107 of them at the starting line. (*Numbers vary according to different sources: it was either 107, 91, or 101 starters.) Some came to have the greatest adventure of their lives. Some came just to ride. Some came to win. Some had practically been born on horses; one brought "no special skills - just love of horses" to the race. Some had years of experience in endurance riding - including Tevis buckles and Virginia City 100 buckles; some had never tried it but thought they had horses that could do it.

Vet controls were strict: 4 checks every day. Only one or two horses were allowed per entrant, and the extra had to be ponied at all times, or else time penalties were added to the day's ride time. They would ride 6 days a week; average miles per day was 35 (the average included rest days figured in), though 40 to 70 miles on some days were not uncommon.

With the next - and likely last - XP ride across half the country coming up this year along part of the Pony Express Trail, I'll be looking at more stories on this original Great American Horse Race and participants as time goes on.
Posted by The Equestrian Vagabond at 9:48 PM

Hello to all! I am one of the last surviving riders of the GAHR and have to say without a shadow of doubt, this race was a life changing and once in a lifetime oppurtunity that I am so glad I was a part of and a finisher. I truly had an exeptional horse named Monte, who lived over 30 years, and was a great joy to be around. It would take me weeks to explain all the great times and challenges we had, met, and lived through, but I wouldn't trade a minute of it! In addition, a huge thank you to all my terrific fellow riders,crews,vet and interns, that made it all so memorable and possible. Ride safe! #103,GAHR

The winner of the GAHR, Lord Fauntleroy, a mule, lived with me after his owner, Virl Norton, died. Leroy died at my place at the age of 37.............Maryben Stover

My father placed 7 the..

I was a support group member back in 1976, switching from GAHR to the Pony Express route. As a young kid it was quite an experience. If anyone has a copy of the GAHR book, I would love to be able to make a digital copy. I may also have some photos I could share. billgeffert@yahoo.com