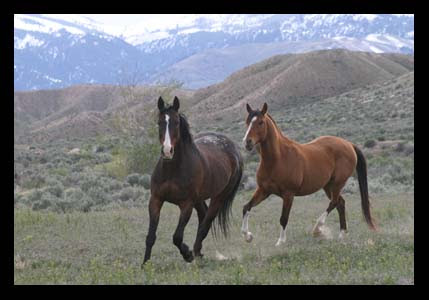 What - no water in Texas?

Tex had been here over a month, but he would not cross the creek, not him, no sir no way! Even when his buddy Stormy - who he sticks to like glue - crossed the creek, he wouldn't do it. 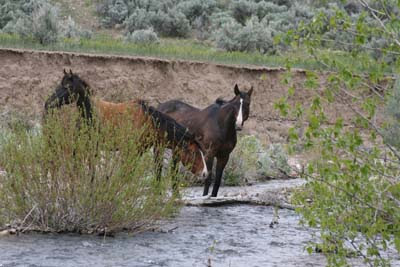 Even when the whole herd crossed the creek, he'd come back to the house and just wait around here by himself. (I guess that was a good sign - he could be left by the herd and not panic - that's a good trait to possess.)

Finally we dumped the one big water trough that everybody drank out of. Now all the horses would have to drink out of the creek - including hydrophobic Tex.

I'd seen no evidence of him getting anywhere near the creek for a drink, so after a day, I put my muck boots on, haltered Tex, and led him to Pickett Creek for a drink. He was leery and hesitant as we got closer to the roaring beast, but he followed me. I stepped in, and he walked up to the edge - the - very - edge - perched his feet right at the water line, and he put his head down, and drank and drank.

I sloshed around in the water while he kept drinking, and when one of his feet would sink down and get wet, he'd pick it up and hold it up in the air; but he didn't move, just kept drinking.

I did the same thing the next day - put on my boots and led him to the creek. He stood on the edge drinking again while I walked around in it. I didn't pull on him at all or ask him to step forward into the creek, but I made him stand there a while right at the edge after he drank.

I repeated it the next two days. He always drank, and he always stood on the very edge of the water, though his feet sank to mid-hoof some days, and on the fourth day, his one foot slipped in the water to the top of his hoof line! He didn't jump, or pull it out; he just kept drinking. I still didn't ask him to step into the water while I walked around in it.

The fifth day: In the morning, Tex was on the other side of the creek with the herd! And I saw him just as he and his pal Stormy crossed back to this side.

Later in the day, I caught him crossing it again.

I guess you can call him a water horse now.

Dang it, here's this creek again. Maybe I can drink enough so it disappears. Shoot, didn't work, it's still there. Is the grass REALLY greener on the other side? Those horses SAY the grass is greener over there. Too big to jump. I might get my feet wet. I'm trying my luck back over here. I said Don't rush me! Oh, yes, the Grass is Greener over here! Posted by The Equestrian Vagabond at 12:32 PM

Tex is a very handsome horse