We went out to mark some of the trails 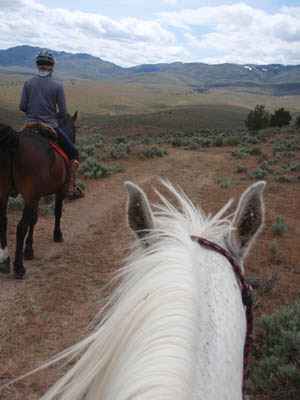 Holy Moly - it wasn't deer, it was big horn sheep! I've only rarely seen these, and never here - they are usually 2 drainages further east. You'll be real lucky if you see these! 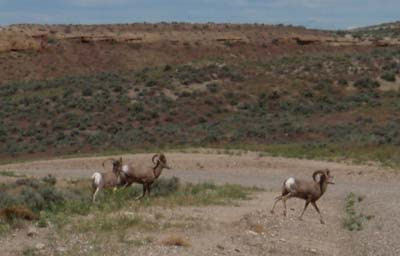 Picking a trail through the brush, heading to the Rock Corral. The flowers are pretty outrageous in the desert right now - lupine, bitterbrush, Indian paintbrush, biscuitroot, buckwheat, daisies, phlox, aster, and others I don't know. The blooming bitterbrush and the lupine smell so sweet. Mac was a bit frantic on his own, but Rhett is coming now! Don't want to get off to tie a ribbon here. We had several boot malfunctions! This was on a steep slope that I almost fell down on while trying to remove the hanging boot - fortunately Mac just stood there and didn't move! Coming down into an old homestead. Mac and Rhett have a discussion. I found a Raven feather! There's a crazy amount of grass, too. Back into the home creek after 7 hours of marking trail. A good day in Owyhee! Come see it at the Owyhee Fandango in southern Idaho end of May. More photos of the Alder Creek loop here.
Posted by The Equestrian Vagabond at 1:13 PM