I just couldn't help myself - when I hiked back over the Rock Corral trail we'd already marked on horseback last week (I checked to make sure the cows didn't eat all the green ribbons, and I added pink ribbons to the hard-to-see green ones) - I had to climb up to and check out a few of the caves I'd seen. What is it about holes in the earth that attract us? Caves, mine shafts, tunnels - why the magnetism that makes us want to go up to them and in them, even though they might be kind of... scary or creepy?

For the treasures that could be inside? For the thought of who might have used it before, and how long ago? For the mystery and awesomeness of the motivation that made somebody tunnel into the earth, often - here in the West - by hand? For trying to understand how Mother Nature created the cave?

For me, part of the draw is... cougars. If I were a cougar, I'd be hanging out during the day in a cool cave with a view of the land below me. Of course, I don't particularly want to wake a cougar up from a nap in a cave, nor have I given any thought as to what I'd do if I did find a cougar in a cave... but I haven't found one yet anyway. I just want to see the cave and what's in it. They do scare me a bit - what if one caves in while I'm inside? I won't go too far in a tunnel, and no WAY would I crawl on my belly to get any further into a cave.

This is the first cave I detoured up to. It was nice and roomy, almost big enough to stand straight up in, and went about 10 feet back. I found no signs of cougars, but I did find some cool nests (rats?), and lots of obsidian flakes, 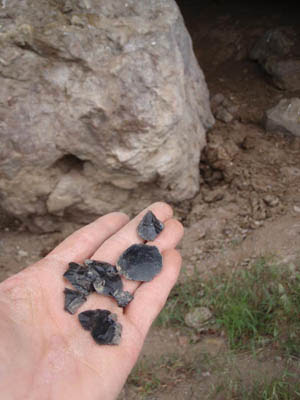 though none of them seemed to be worked pieces. Obsidian occurs naturally in this area, though you can also find arrowheads (presumably made about a hundred years ago by Native Americans) if you're lucky.

A canyon wren flew in to check me out as I snooped around. 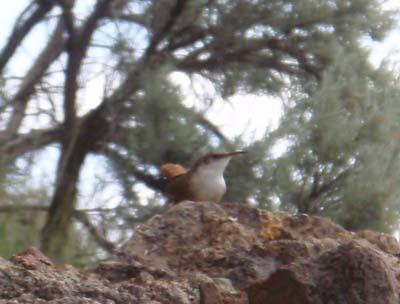 but with a nice view. It was a very protected spot - it had a nice little 'porch' that I had to climb a bit to get to. More obsidian flakes, and a nest inside.

And yet another cave. Same size as the second one, no obsidian, no nest, no cougars, and another nice view. Besides caves there were flowers, flowers, and more flowers. But don't try the death camas even if it looks a bit like the wild onion. I almost made that mistake one time.

Steph was marking trail in the area, and said the wildflowers nearer to the Owyhee mountains are outta control. The lupines are taking over the earth. She also saw the two wildish horses that I'd seen while hiking in March in this area. I didn't see them, but Steph said they were so close to where I was flagging, they were probably watching me.

You'll see the rock corral, the explosion of wildflowers, possibly two half wild horses... and those caves if you do Day 1 (Friday) of the Owyhee Fandango. I just explored the caves that will be on your left past the rock corral. If you decide to tie your horse to a sagebrush and run up and check out the caves on the right, let me know what you find.

More pictures from the day here.
Posted by The Equestrian Vagabond at 8:02 AM