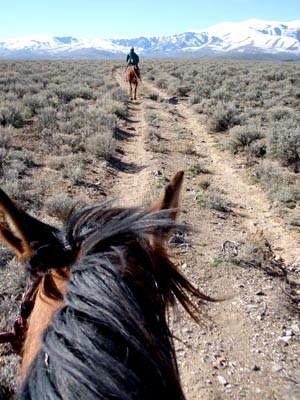 The Wagon Wheel Homestead on Brown's Creek was our destination today.

We'd approached it from the north side of Brown's Creek one day last year, but we'd come to a locked gate and were only able to look down on it. There are no locked gates on the other side, so we thought we'd try to get there from the south side.

We did our reconnaissance on a map and planted the route firmly in our heads, then lit off southwest toward the Owyhee mountains. Karen recalled some of the way from the June Almosta Bennett Hills endurance ride that used some of this trail.

Close to the mountains we turned southeast 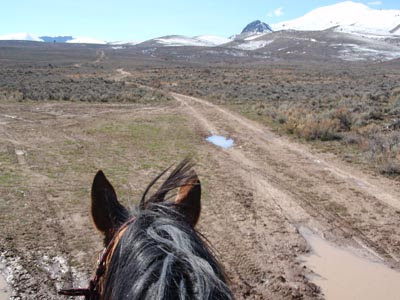 on a 2-track road near the base of them. 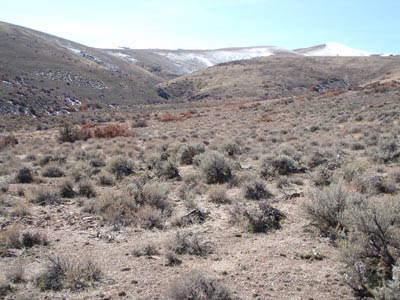 The snow had just melted off this road. Horse hooves slipped and sunk in the mud, and we did a lot of walking. We crossed the three big drainages: Little Hart Creek, Hart Creek,
on a 2-track road near the base of them. 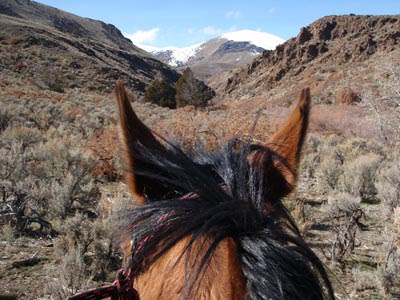 and Brown's Creek, (we think we named them correctly - the little ones can have deceptively deep canyons at some places) and several little ones, all of which had varying amounts of running water from snowmelt at this time of year in these mild winter temperatures.
on a 2-track road near the base of them. We knew we had to turn left after we crossed and climbed out of Brown's Creek (in fact I'd seen a road on the ridge in the distance)... but somehow we missed any turnoff. By the time we'd crossed another couple of drainages, we knew we'd gone way too far, and we were going to end up on Bachman Grade road, a main gravel road that climbs up into and crosses the Owyhees.

But, no matter. It was new scenery, a completely new trail for me, and the horses were getting a good workout in that mud and from the climbing out of all those drainages.
on a 2-track road near the base of them. 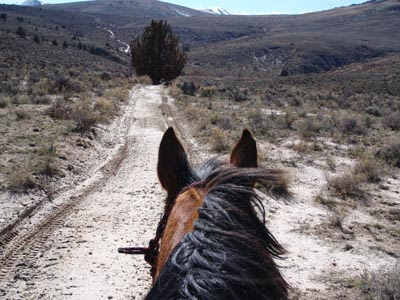 Coming back down toward Oreana on Bachman Grade road, we had some long steady miles of trotting. The skies were clear and it was cool and breezy - a perfect winter day for riding.
on a 2-track road near the base of them. We had to do a bit of bushwhacking on the way back, because a new fence has just been put in across our usual trail back > : (

...but Jose's Homing Compass was working just fine, and he had everything under control.

The horses had worked up a good sweat with the workout and their hairy coats, and by the end of the day I was whooped. I felt like I'd done an endurance ride today.

And come to think of it - we did! We'd made a 25 mile loop. Nice jaunt on a winter day in the Owyhee desert.
on a 2-track road near the base of them. 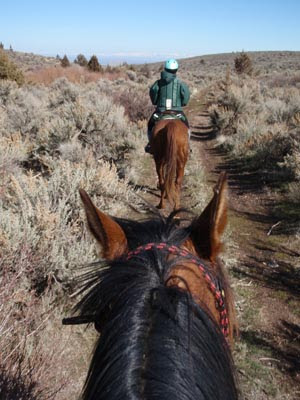 Posted by The Equestrian Vagabond at 2:34 PM

sounds like a good extravaganza was had by all

Wow... I'm SO jealous of how much riding you can do in that beautiful country right out of your ranch! I have to trailer everywhere I ride. I live just 10miles south of the city of Louisville.. :(