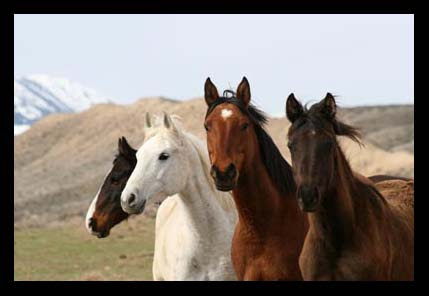 We were attacked out on the trail.

Big black monsters skulking everywhere, watching us. Some of them apparating out of the bushes. Some of them screaming at us. One of them split into two almost right before our eyes. One came face to face with us, eyeball to eyeball. Close enough to touch. Tension extreme, the air electric. We both jumped away from each other.

Then came the attack.

From behind. Huge black monster. Charging down on us.

Mac bolts. I almost have him, then he is gone. Zero to forty-five in two strides. Down a steep hill to boot. Uh oh, I'm in trouble here. I haul back on my runaway with desperation and a prayer. Turn him into the sidehill. His panicked head is in the air, legs flailing. Tricky footing. I turn him back to the trail before he falls down, then turn him into the hill again.

The mama cow shoots past us to her baby cow ahead of us. Danger past. We survived. Mac slows down.

Immediate terror is over, but the hearts pound and the sweat pours freely and the adrenaline keeps shooting, from me and Mac.

Did I mention I was riding a cow horse? He came from the Rushcreek Ranch where he worked cows for a living, but in the years between now and then, he appears to have sort of forgotten that life. He was terrified of a bull we tried to help round up here two years ago. (Or, maybe it was my bad riding.)

But I think even a former cow horse can be forgiven being scared of a huge object barreling toward him from behind. It scared me!

Today it's not only cold and windy (and Mac gets goosey in the wind and I SWEAR he gets scared by his white tail waving behind him) but the cows across the fence has the herd on full alert. The cows are everywhere, patrolling up and down the fence, bawling for water, attempting to lay siege to Pickett Creek. They have access to running Hart Creek a few drainages over, but they want our water.

The herd is unsettled. They stand on frozen alert, spin and run back, and wheel and dive away again 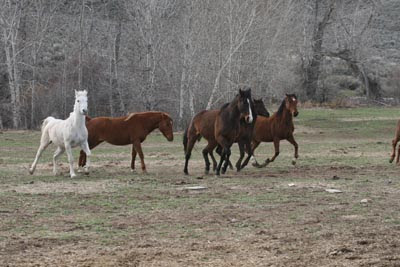 like a flock of birds, as one organism. And back 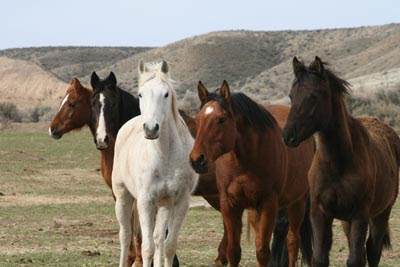 A wind gust rattles the hay barn roof and fence panel. The horses twitch. A tumbleweed flies across the ground. They jump. A dog sneezes. The horses bolt as if electrocuted. They won't venture more than 50 yards from the hay bale, staying under the invisible shield of protection over the house. When I walk up the pasture to the green gate, where they usually start following me, today they just stand down by the house staring at me, clustering closer together. They gape at me as if I'm a monster when I walk back down.

They get irritated with each other, pin their ears, Spar over the fence. Even Stormy gets mad when I pet him. Sure they've been in the wind before and they've seen cows before, but these are... cows. In the wind. Some of them may be attack cows. They've heard the survival story from Mac.

It's a good day to forego the riding. Posted by The Equestrian Vagabond at 6:35 PM

I grew up on a dairy, and my horses were used to cows, black and white Holsteins, and one day my horse saw, of gosh! an Angus cattle! All black and fat and really spooky,and weird looking, not like OUR cows at all! They were scary,my horse thought. Renie