PEBSBACSCH and the Cow Stink Eye What do you do with a Pig-Eyed Barn-Sour Balky-Ass Chicken-Shit Cow-Horse who's afraid of cows?

You take him out into the cows, what else!

We might have had a relatively stress-less good workout ride today if I'd taken Mac up on the northwest flats, but after two days of scary gale-force winds, besieging cows, and only-the-herd-knows what kind of Monsters that freaked the herd out the last two days, I was, by golly, taking that former cow horse Mac southeast out into the cows.

I thought I'd trot him up the Training Wash, down Spring Ranch wash, and up Blond Cow wash. Good tiring physical workout. Just getting this PEBSBACSCH off the home acres toward the fence where the cows patrolled was extremely challenging and irritating. He'd throw out his anchor. I'd spur him on. He'd leap forward then slam on the brakes. I'd spur him again. He'd plant his toes and dig in his heels. His little pig eyes bulged wide and white in terror, (no cows in sight)(NOTHING in sight, actually), and he huffed and puffed short quick little hard breaths like a woman in labor.

We finally made it up and over the Tevis trail (about a quarter mile!) and down into the Training wash, where, though there were no still sign of cows, the going was still lurchy. Mac was convinced something was going to attack him. Getting him moving forward up the wash was like driving a car with the parking brake on. Each foot reluctantly moved forward as if an invisible force was pulling it backwards. His body would sink down like a cat going into a defensive posture at - what!? Maybe he saw ghosts on this bright, clear, still, chilly day. Just because I can't see them doesn't mean he can't. For lack of scary cows popping out of bushes, he found certain tangles of sagebrush roots particularly paralyzing. 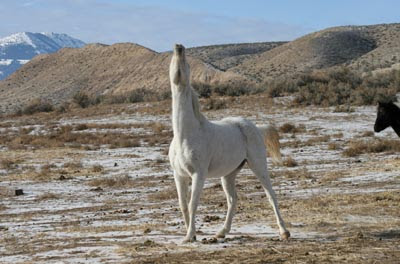 Okay, forget the physical training today. Sure, I might have been able to spur him along into a trot, but we'd have ping-ponged and braked and leaped and lunged our way along, and I probably wouldn't have stayed in the saddle for more than a hundred yards. And his brain would have been shot.

Change of plans. Instead, we'd do a mental workout today: braving the terrifying world out here (the one he'd handled just fine the last few rides). A 90 minute ride would turn into a 3 hour ride... but that's what we were going to do.

So, we walked. Jumping, spooking, flinching and balking forward... but we walked.

Monster attack cows appeared ahead. Mac slammed on the brakes, head up in the air, ears forward and twitching. They stared at each other. The cows looked away first, and turned to walk away. Well, then, the cows weren't so scary when they were moving away from us. We walked on. Mac stared down the other cows he met and scared some of them away. 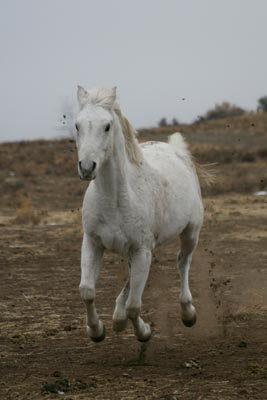 The ex-cow horse was better by the time we reached the top of the Training Wash and rode down into Spring Ranch wash. By now only a few particularly scary sage brushes were assaulting him. He wasn't afraid of the cows anymore. All Mac had to do was give them the Stink Eye and they'd turn away. He even Stink-Eyed a mama and baby 50 yards away, and the calf turned and bolted away, bleating in fright, and mama ran after the baby.

We probably could have trotted on down this wash for more exercise, but since Mac was inflating with confidence, we just kept walking and Stink-Eyeing the cows.

By the time we got to Blond Cow Wash, Mac was throwing the Cow Stink Eye left and right, unafraid, sauntering along, striding out. We even trotted boldly and calmly all the way up Blond Cow, getting a good workout in after all.

This PEBSBACSCH can be exasperating at times - but I still like the bugger! 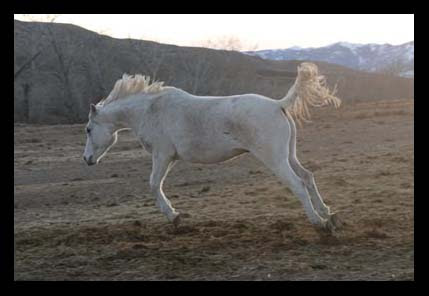 Posted by The Equestrian Vagabond at 8:34 PM