The Two-Horse Mystery and... Cats 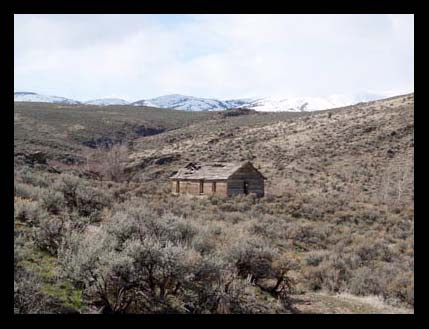 After discovering a new nesting golden eagle pair on Brown's creek, and seeing another set of promising cliffs a mile upstream, I decided then and there that I have to hike the whole of Brown's Creek, from mouth to source in the Owyhee mountains. (Not all at one time).

Last week I headed out on foot with those next cliffs as the destination. The wind was strong and cold enough to make my eyes water. Little snowstorms dodged around the Owyhee peaks, and an occasional errant snowflake zipped past me, and probably didn't hit the ground till it reached Montana.

I started hiking at the dam... but instead of turning down that drainage toward those cliffs, I decided to follow an old 2-track road west, which after a couple of miles landed me on Brown's Creek. I saw a flying golden eagle - possibly one of the pair I'd discovered, or perhaps a new pair in those new cliffs I was going to.

As I descended into Brown's Creek, I hadn't seen before! That meant the the Forgotten Girth Trail Homestead was further upstream.
I looked downstream toward the cliffs, upstream toward more surprises... 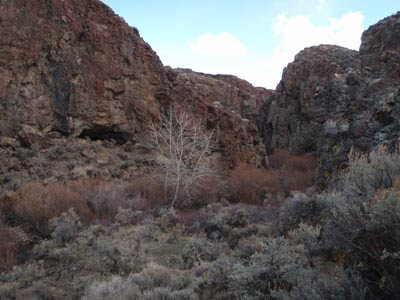 I hiked along more cliffs, crossed through more drainages running into Brown's Creek, one with quite a lot of running water. I discovered a nice spring, some cool rock formations, and I found a place along a game trail where deer bedded down.

About this time I'd started glancing behind me, and keeping close watch on the cliffs. I've heard occasional rumors of cougars in this country, but I have never seen proof. That doesn't mean much though. I once complained to my Toiyabe (California) Forest Service Ranger friend, who said there were cougars in that country, though I'd never seen one. He answered, "Oh, but they're watching you!"

That's something you tend to think of when you're walking in somewhat vulnerable places, such as below small bluffs, in narrow washes, and along a running creek with tall sagebrush (some of them 8 feet tall) and thick willows. Hmmm. I didn't see any cougar sign, (though the ground was too hard to see recent footprints), and I didn't feel watched, but then we humans aren't very in tune to things like that, even if we think we are.

I kept thinking I'd see the FGT Homestead, just around the next bend in the river, at the next locust grove, just past those next cliffs... but I kept hiking upstream, 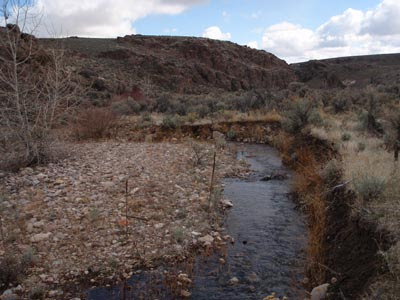 and it never arrived. (A map would have been handy, yes, but I wasn't carrying one.) I was quite sure, when I decided to finally turn around for the day, that the FGT Homestead was indeed past the next set of cliffs. In fact I could see a road coming out on the other side of the creek in the distance that I was (pretty) sure we'd ridden out on. But I'd save that for another day.

I turned around and set out hiking cross country, taking a guess at where the dam was (I didn't have a compass, either - my GPS conked out soon after I set the starting point and timer on it). I crossed more drainages, found more canyons, passed through a sage grouse lek, and suddenly started seeing horse poop, and not too old. Horses!?

There shouldn't be horses turned out here for winter grazing, and there weren't wild horses here - the closest mustang herd is probably 20 miles northwest, across many fences. There were no cows turned out here at the moment either. I started seeing horse tracks that weren't too old. People riding out here (in the middle of nowhere)? Sure, we do things like that, but nobody else would be out here. And there was too much horse poop and tracks for a couple of random riders.

I followed the curve of a hill - and there they were. Two horses. A chestnut with gray mane and a pinto. Only two?? How very odd. If ranch horse were turned out here (unlikely), there would be more than two. But if they were wild horses... how did they get here and, a pinto?? (Pretty one, at that,)

They had their backs to me a hundred yards away. Good thing I wasn't a cougar. "Hey guys!" I yelled.

Their heads flew up and they whipped around and stared in my direction. I waved and walked around so they could see I was a human.

That set the chestnut off. He (she?) ran back and forth snorting, stopping, staring, bolting, running away, turning to run back and look - wild mustang behavior. The pinto didn't seem half as bothered, but he (she?) followed the chestnut closely.

I kept switching between my crappy little binoculars and my crummy little camera so I neither got a real good look at, nor real good pictures of them. The chestnut looked a bit mustang-y and had a longer shaggy mane, and in one of the pictures I think you can see a freeze brand on his neck. The pinto was more stocky, like a ranch horse, and her mane was shorter. I never got a good enough look to see if they were male/female, nor if they were shod.

I didn't bother approaching because I knew I wouldn't get much closer. They continued their behavior - the chestnut running back and forth and looking alarmed and snorting, the pinto following and looking, but not too worried.

I called a few people when I got home, but nobody knew anything about them. I called the rancher Bob who has the grazing allotment, but he didn't call back.

Today while out riding, I happened to run into, of all people, Bob. He was out checking on his cows (the ones stalking our fence line).

"I've heard of those 2 horses from different people over the last couple of years. I think they were dumped out there." One might have been a mustang someone had for a while, the pinto might be part mustang part ranch horse. Who knows. They've got plenty of grass out there now, and access to water, so... I guess we've got two Brown's Creek Mystery Horses out there. It must be good luck to come across them.

"You ought to be careful when you're hiking Brown's Creek," Bob said, when I told him of my mission to hike the whole thing. "Cats."

Cougars! "There are a lot out there," he said - but I'm skeptical. "A lot" can mean many things. There can't be that many out there, and anyway, the chances of seeing one are quite low. I'd be quite lucky to see one (preferably he won't see me) - luckier than finding two horses in the middle of the Owyhee desert.

If I do run into a cougar, hopefully he won't be hungry and I won't look appetizing. I will keep looking over my shoulders. I expect those horses will too. Posted by The Equestrian Vagabond at 2:11 PM