Speed through the Owyhee desert on the highway and all you see is boring rolling desert hills dotted with sagebrush. But get a little closer to the mountains, pick any of the big creeks coming down, and you'll find some spectacular canyons hidden away. 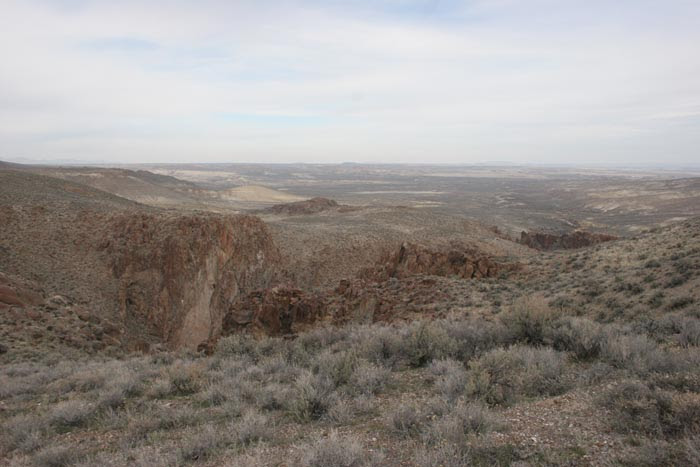 (an old homestead in the distance) that eventually empties into the Snake River ten miles to the northeast. Looking toward the Owyhee mountains, a dramatic, deep, narrow red-walled canyon (with running water now) rises abruptly, and serpentines about a mile before ending just as abruptly on the upper end in more rolling hills. Beyond that another mile or two is another similarly enticing canyon... but I'd save that hike for another day.

In this canyon was a sheer cliff wall that I knew just had to hold a golden eagle nest. As I climbed down closer to the rim of the canyon across from the cliff, I saw whitewash, and as I got even closer... a golden eagle flew away from somewhere in the area of the cliff.

In fact I counted five golden eagle nests on the cliff face (they often have several within their territory, and often rotate nests each year). I thought that one looked like it might be in use, or was going to be used. I kept studying the nests and the skies but didn't see any eagles. (I was being watched by a prairie falcon about a hundred yards away, perched on a high rock.) The golden eagles in this area nesting on cliffs should have laid eggs by now, and since I did see an eagle, it was still a possibility there was a nesting pair here. I'd have to bring my bird biologist friend back.

Driving further up the ridge above Browns Creek, if you drop down on the correct road, and take a left at another intersection of another overgrown road, along a seemingly random, minor tributary to Browns Creek, you come across this spectacular sight: an old dam! An old timer from around here said it was really used as a wild horse trap. I suppose it could have functioned as one back when wild horses roamed this part of the Owyhees; the low end of it is in quite a steep narrow canyon, and could have served to trap a small herd. The upper end, however, has held water at some point in its existence. It was, in any case, probably a CCC project. The Civilian Conservation Corps was a public work relief program developed by Franklin D Roosevelt during the late 30's to early 40's to provide work for men who were unemployed by the Great Depression, and to help conserve and preserve the nation's natural resources. "C's" crews worked on reforestation (some 3 billion trees were planted), building dams, fire fighting, and forest recreation development. 25,000 Idahoans received jobs and training from 1933-1942.

(I've come across evidence of a CCC camp on Browns Creek in central Idaho, but nothing on the Brown's Creek here in southwest Idaho so far. A trip to the Owyhee County Museum and archives is in order.)

And, in any case, this dam was no little project. I used to work on trails, and I've built retaining walls a few tiers tall. Even something that small is not the easiest thing to do, when your materials are right at hand. Most often the materials were not right at hand, and we spent a great deal of time searching for rocks and carrying or rolling them to the site we were working on. And of course the rocks usually weren't perfect; you had to shape a lot of them, and hope you didn't break them in the process. (Or your fingers or toes, which also happened upon occasion.)

That this dam is still standing and likely fully functional - in the unlikely event of a hundred-year flood - some 70 years later is a tribute to how well it was built.

This Owyhee corner of Idaho really is spectacular country, full of scenic treasures, and hidden surprises from the past.

More photos at of the canyon and dam on This Page.
Posted by The Equestrian Vagabond at 10:18 AM