He's been here about 6 months, and he still doesn't really fit in. He is quite herd bound, but at the same time, he is often off by himself. He hasn't buddied up with anybody.

Parelli would call him a basic Right Brained Introvert. Yvonne Barteau, who wrote "Ride the Right Horse," (good book, by the way), would classify him as a basic Fearful personality, but with a few Aloof and Social characteristics.

He's a very cautious horse... every time I approach him, and I mean every time, I have to approach him cautiously. You can't just barrel up to him and throw an arm around him or pat him on the butt like I do Stormy or Jose or Kazam. I can walk up to him 10 times a day to interact with him, and he's the same every time. He will sometimes come up to me, but he always stops a few feet away and thinks about and weighs the alignment of the Universe before he cautiously approaches. Then he sniffs my hand, and only then, if everything checks out, I can slowly pet his face, and his neck. If I approach him from the side, he won't turn his head to me but he'll become very alert, head up in the air, one ear cocked toward me, and eyeball me out of the side of his eye. If I take a step back, he'll swing his head to me. If I take a step closer, he'll either move away or turn his head straight, back at full alert.

The night he choked, he seemed to want me close. Not necessarily touching him (especially his throat, I probably rubbed his throat too much and added to his discomfort), but close. The next day, he didn't want me near him at all! Two days later, he doesn't mind me approaching him again... though he's still cautious as usual.

He's the kind of horse who could really use his very own human to bond with. I think he'll be a very loyal and trusting horse with that person.

And he is a beauty, with that chestnut coat and blond mane, and pretty face. 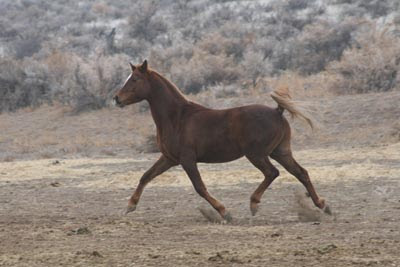 Posted by The Equestrian Vagabond at 3:43 PM