She's about 8 months old now. She's still soft and fluffy... but she's quickly growing. Her hip almost comes up to my nose now. She's friendly, spunky, and has an at-ti-tude! She likes to be petted, loves to have her neck scratched and lifts her head up in the air just like her mama did. Smokey leads well most of the time... except when she doesn't. If I try leading her too far away from the herd, I either have to get her to move forward by turning her to the side every few steps, or I still have to put a butt rope on her.

She picks up all four of her feet well, and she moves well off light pressure - moving her front end and her hind end and backing up... except when she doesn't.

If she gets upset or worried about something I'm about to ask her to do, she sticks her upper lip out like a parrot and her eyes bug out and prepares to show off that at-ti-tude. Everybody is still the boss of her (even Stormy!), but she's not pushed around too much, as she's more just one of the herd now.

She's often the spark that gets the herd in a gallop around - they aren't chasing her, they are following her. 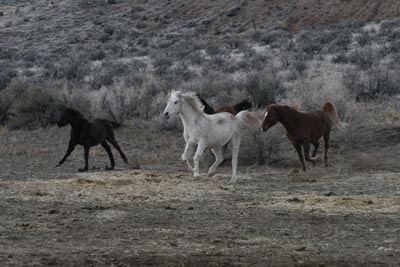 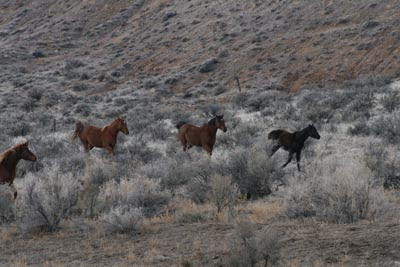 She crosses the creek without a problem (she used to be scared of it), doesn't mind a rope being thrown all over her, and one day she came up and bit a tarp that Kazam and I were having a tug of war over. She's got acres and acres to run and play and grow up in - just about a perfect life for a baby. 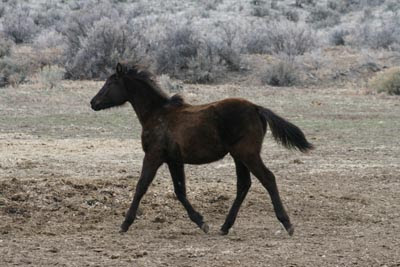 Think she's ready for the saddle yet? Posted by The Equestrian Vagabond at 6:08 PM

Loving the pad therapy! :) What is Smokey's breeding Merri?

Well, mama Princess is half-Arabian, half-Saddlebred. Sire LJ Owyhee Moonstone is a cremello 1/4 Arabian, 3/4 Foundation Quarter Horse. You do the math on the baby : )
You can see the handsome Stoney here:
www.lostjuniperranch.com/LJOwyheeMoonstone.html.