It's been a traumatic 5 weeks since a shocking and distressing sight greeted Gary Sanderson the afternoon of January 17 at his barn door in Tennessee. His 9-year-old Arabian endurance horse was standing apart from his herdmates with a tree branch impaled in his side.

"I couldn't talk," Gary said. He did manage to call his veterinarian, Dr Martin, and his girlfriend Kara Disbrow. "He was incoherent," Kara said.

Though they still don't know what happened, Gary and Kara surmise Amigo either slid in the mud into a tree, or a tree fell on him in the 110 acres where Amigo and his two buddies roam. One veterinarian later deduced that Amigo had had the stick lodged in him for 10-12 hours before Gary discovered him.

Dr Martin recommended putting Amigo down immediately. Gary asked him if he had any chance of survival. "Dr Martin said he might have a 2% chance to live if we got him to the University hospital." Amigo had shown Gary nothing but heart in their 5 years together, and, besides, Gary says, "What are you going to do? He's like my son. I had to give him the chance to survive."

Amigo walked on his own and loaded up into a trailer and was hauled to the University
of Tennessee Large Animal Clinic, where his surgery immediately began. 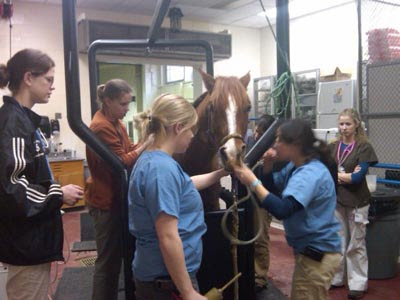 He took it all standing up, and it took the team of veterinarians about an hour to remove nearly 30 inches of the 2-inch diameter branch from his body. 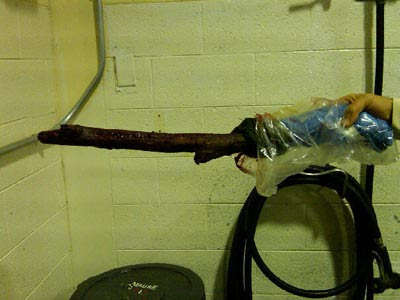 It had collapsed his left lung and broken two ribs, and introduced a deathly load of bacteria into his body. The veterinarians packed the gaping hole left by the branch with four rolls of gauze, re-inflated his lung, put in ports to drain fluid from the lung and wound, and put him on several antibiotics to combat the bugs and toxins in his system. Eventually his right lung also needed a port. "He looked like he'd been in target practice with all the tubes coming out of him," Gary said. It was touch and go over the next few weeks; Amigo came close to death several times and defied it each time. He received two series of plasma from donors, but had an allergic reaction to the second series, where his platelets attacked the plasma, instead of the infections in his body. He went into respiratory distress several times, once falling down kicking in a seizure (a vet deduced he'd had a blood clot in his brain). Then, 4 weeks after the accident, came the dreaded "L-word" - laminitis. Gary had been hopeful and upbeat up until that day. "That's what got me," Gary says. "He'd been doing so well, getting better, every day progressing a little, PCV (red blood cell volume in the blood) good, lung drains removed, wound healing, bacteria dying, then BOOM. He crashes." Gary had a hard time keeping a positive attitude around Amigo, something his horse definitely needed.

The vets had removed the lung drain because the blood work looked good, but the bacteria had increased. Drain tubes were put back in and the lung flushed twice a day. Amigo returned to the Hyperbaric Oxygen Chamber for daily treatment and got ice boots for his feet. One antibiotic was changed, and a fourth added. He was put on IV fluids, he was put on tube feeding because he needed more nutrients than the hay he was eating (he wasn't interested in grain).

And once again, Amigo thwarted death. The laminitis threat was arrested. He's now alert, walking outside several times a day, and grazing (he is still being tube fed). He's down to two antibiotics.

Through it all Amigo has amazed and stolen the hearts of his veterinarians and the vet students working on him."He's an amazing animal," Gary says. "He's been the best patient. He has never fought or objected to his treatments. In fact, that's one of his problems - this horse doesn't show any pain. He's very stoic."

One of Amigo's veterinarians, Dr Nicholas Frank, concurs, calling Amigo the "most cooperative patient." He credits some of Amigo's amazing progress to Gary's devotion. "He has an extremely dedicated owner who loves him very much. We should never underestimate the power of that in a situation like this."

Amigo's friends started a Facebook page for him; he now has almost 3500 fans following his progress and sending good wishes his way.

While Amigo still has a long way to go, and he's not completely out of the woods yet, his chances of survival are now better than 50/50. He's on the upswing again, though he's pretty exhausted. He hasn't laid down once since the accident.

And while just coping with Amigo's survival has been traumatic for Gary, now comes the reality of the vet bills. The original guesstimate was $5-6000. But nobody could have predicted what Amigo would be going through, and those bills are now close to $20,000.

"Financially, I'm devastated," Gary says, but he doesn't regret anything. "What would you have done, when your horse is showing he's wanting to fight for his life? I love the horse. Next to Kara, he's my best friend. I had to give him that chance."

Gary is starting a second job; some fund-raisers are in the works, by local groups and Leslie Greenwood, a fan from from Canada; and friends and fans of Amigo on Facebook have begun sending donations, which as of Saturday February 20th, totaled over $1600.

Anybody wanting to join Amigo's fanclub and follow his progress and send good wishes can do so on Facebook.com, "Amigo - One Amazing Horse!" Anybody wishing to donate money towards Amigo's bills can do so through paypal using katpirate@comcast.net or by sending a check payable to

Leslie Greenwood from Canada has started a Fundraiser for Amigo, making Italian Charms (with a photo of your equine friend) for $10, with all proceeds going to Amigo and Gary and Kara. Leslie can be contacted at les.leroux@shaw.ca . Her fundraiser page on Facebook is on this page.

Any money raised over the amount of the vet bills will be placed in an Amigo Fund at the hospital, Gary says, to help other horses in need.

Now, all of you go out and hug your horse and say a little horse prayer for Amigo. He's not done fighting yet. Posted by The Equestrian Vagabond at 10:10 PM

Such an incredible story. I have been following his story and can not imagine what it would be like for the owner to have discovered Amigo in this condition.

I'd like to think that I would have remained calm and got the help that was needed. And then I wonder if I could have kept from having an emotional melt down.

AHA should cover Amigo- Arabs have bad raps as being delicate little halter horses who are crazy Boy does Amigo prove that isn't true.

We should get this story to AHA to see if they could help.

That would be a great idea. Send it straight to Denise Hearst and not through the 'channels' so to speak.

It's all in a name. Friends never give up on friends, Amigos. My Amigo suffered an injury many years ago and the vet decided it would be best to euthenize him because he would never walk again. I couldn't accept that and I went to work. With a lot of help from a friend and a lot of love I never gave up on my amigo. Today I have one of the greatest horses I have ever owned and at 19 years he's still going strong and running with the youngsters. Have faith and pray, miracles do happen.

reading this brought tears to my eyes... i couldnt believe what i was reading... he is a beautiful horse who is very very VERY lucky.
all the best