If the snow won't come to me, I must go to the snow.

Just six miles up Bates Creek, up the dirt (now snowy/muddy) roads lay the Owyhee mountains. I took a cold ride on a 4-wheeler up there to get a taste of the snow in the lower foothills. Not a human around anywhere - it was all my backyard today.

South facing slopes bare, north facing slopes with a foot of snow. Hard going without snowshoes, sinking to your knees with every step. A panoramic view of the Snake river land below, 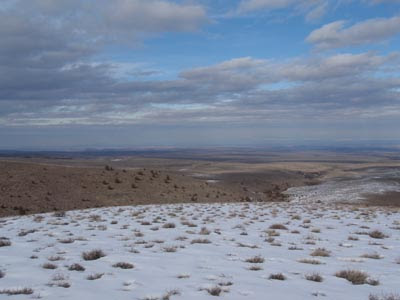 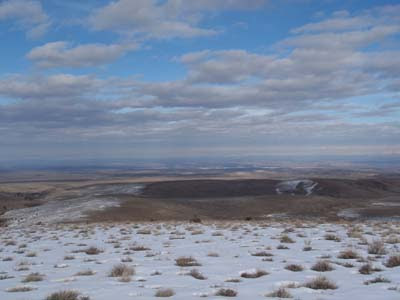 Spectacular country. Pronghorn and mule deer are common. Bighorn sheep in the canyons, bands of elk in the mountains. Wolverines are rumored to have once lived here but none have been recorded for decades. If black bear ever did roam here, they were surely wiped out in the mining days. It's different out there when you know you won't come across a bear. But there are rumors of cougars. It's different out there when you know there are cougars and you're the only one playing in your backyard. Nothing around today though but the frozen footsteps of a coyote and the impressive silence of an extraordinary land. Posted by The Equestrian Vagabond at 9:51 PM

Spectacular country Merri. I envy that you are able to find this wide open space without the trace of one human being anywhere. How sad that the wolverine, the black bear, are no longer inhabitants of this great area. What a mess we humans have made of the country side. :(

How beautiful! I long to see sights like those!