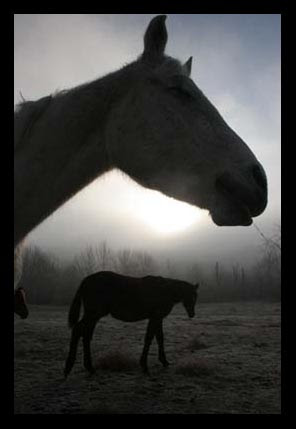 Scientists can give you all kinds of scientific explanations for fog and its behavior. Wikipedia can tell you all about dew points and vapor and condensation, but I can tell you how it behaves here in Owyhee.

Here, fog is a free spirited erratic Being with a sense of adventure and humor and artistry.

Here in the Owyhee high desert, with drainages and canyons and hills and mountains to play in, fog thinks for itself. It molds itself into different entities and travels on its whims. It passes through in an hour. It stays for days. It arrives in force, fast, thick, and serious, and settles like a heavy blanket. It dances in whisps, gliding up random washes, changing direction on impulse. It crawls over ridges; it creeps down drainages. It flirts with clouds over the Owyhee mountains, then tumbles away down the hills. It teases the sun. Fog veils the sun, lets it emerge through, obliterates it. The sun, that mighty burning star, the Earth's energy source of life, has no power over the ethereal fog. Fog wears a chill cloak. In winter it paints with ice, chiseling hoar frost, carving ice crystals on manes and tails. It draws silhouettes of the horses against a touch of morning light. 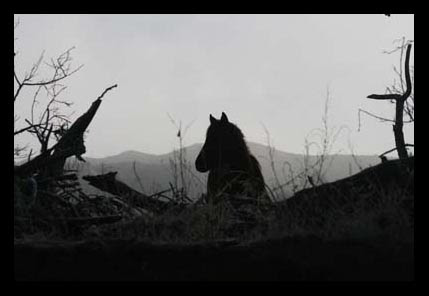 It delicately sculpts the tiniest twig with ice, and brazenly devours the biggest horse. Its heavy silence calls the horses, luring them deep into its layers, 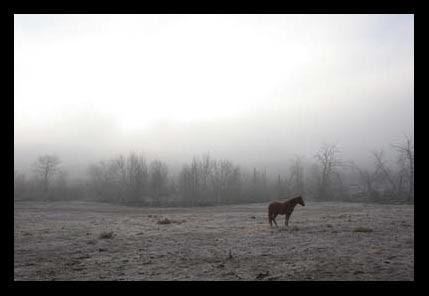 Step into the fog. Let it lure you in. Let it engulf you. 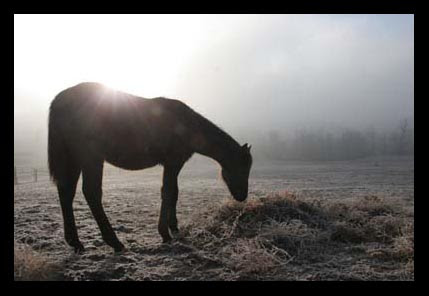 Posted by The Equestrian Vagabond at 12:56 PM