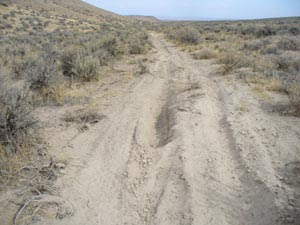 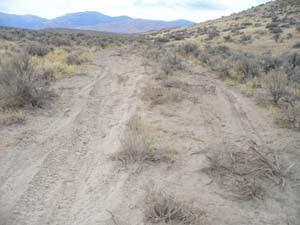 Now, I'm all for multi-use recreation areas, but then this is what happens sometimes.

The Bilbo Baggins trail is no more. What was once a nice 7 mile loop, half of it a nice soft dirt trail through a sage brush drainage, has been completely destroyed by motorcycles. I know who it was and when it was - it was a motorcycle race happening the same weekend as our 5-day Owyhee Canyonlands ride last month.

They took a nice trail, left most of it so rutted - some ruts over a foot deep - that even those motorcycles couldn't ride over it anymore. And you know what happens when motorcycles can't ride over a trail in the desert? They make another one next to it. And when they rather immediately F that one up, they make another one beside it, and another one beside it, and another, and another. At a few spots I counted FIVE trail gouged through the sagebrush. Now, nobody can use this 'trail'.

Now, I'm not complaining about Whoop-De-Doos. I HATE them, and my horses hate them, but I'll give them to the motorcycles, just sucking it up as something that has to be dealt with when you share recreation trails. They, after all, have to put up with the occasional horse poo along the trails. (Of course, Horse Poo does not wreck a motorcycle's tires, like Whoop-de-Doos wreck horses' legs... I was pulled once from a ride when my horse went lame from going over too many WDDs on a ride.)

I don't see an excuse for this destruction. There are thousands of acres of OHV BLM land to use in this same area. Why destroy another good trail?

Now, those of you who leave this destruction behind might say, "It's My land too, I can do what I want." Sure it is - try taking care of it and using some sense. Or, you might say, "It's just a desert, there's thousands of miles of desert, who cares?" Well, it's my back yard, I care, and it's ugly and destructive what you've done.

You can't use the argument horses are as destructive as motorcycles when it comes to trails. I can prove it. The motorcycles had what - 20, 50, 100, 200 riders in the race? Doesn't matter. We had over one hundred horses going over our trails - 5 days of hundreds of horse feet over our trails - and you can't tell we've been there.

Perhaps the BLM can come out and bulldoze the whole thing up and make a runway out of it. Wouldn't look any worse, and then planes could come use it too.

You just better watch out. When I found your house(s) I will borrow a Monster Truck and leave ugly destructive ruts all over your front yard and let you live with that.

F, by the way, stands for Focaccad'ed. It's a word, look it up (but you have to guess on the spelling).
Posted by The Equestrian Vagabond at 10:44 AM

Hight Fives Merri! Here's a glass of wine as well! Trail Blazing "B*****ds" my ass! The first one that breaks a neck out there will find some reason, logic, or justification to blame anything but the actual cause!

what she said... i used to see that kind of trail damage all the time in california.
sounds like your f word's a yiddish one ? :) Nu?

As a matter of fact, I believe it is Yiddish! (It's not a BAD Yiddish word, is it?)

We have the same problem in CA on our private property forest trails, only with fewer numbers of cycles. The riders love to tear up and down gulches, creating lovely washes that will erode in the winter. Or they will ride straight down the middle of the trail creating a deep V that will erode. I have come to hate motorcyclists' riding on trails! It's also dangerous because some horses don't take kindly to them blasting down the trail at them head on. unfortunately, in our attempt to be fair to everyone, we (the public) are allowing this. There ARE special areas for cycles alone, so they can destroy one given area, but it is a considerable drive from our area, so they don't go there. They just use the local wilderness and all the horse trails.