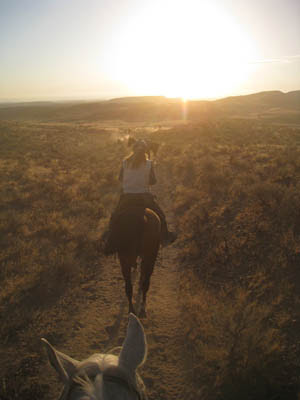 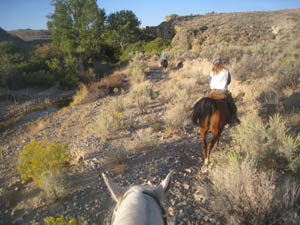 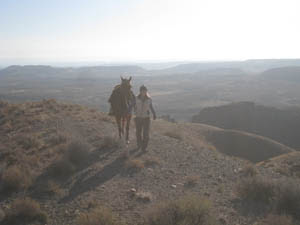 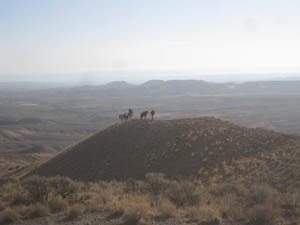 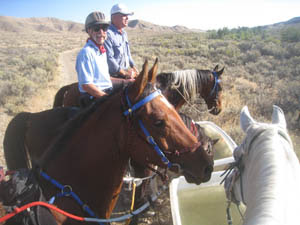 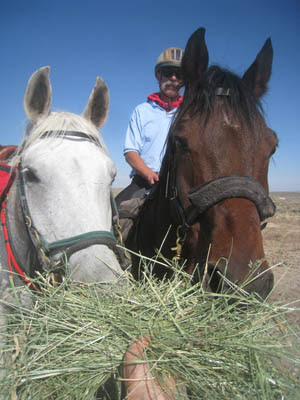 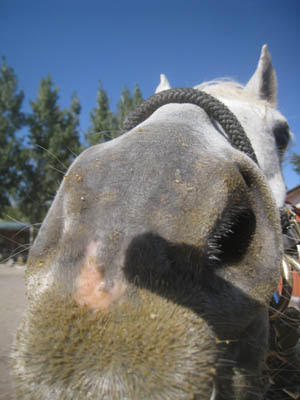 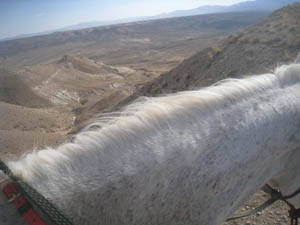 Ride manager Steph had originally planned to ride her favorite horse Rhett the first 3 days of the ride... but she soon realized that would be tough, even with Regina Rose helping day-manage the ride. But this weekend there would be plenty of volunteers, and Regina had everything under control, so not only did Steph get to ride, but I got to ride again too!

And it was one of the prettiest days of the 5 days - if one can really be chosen over the other - the 17-mile loop 1 for both the 55-milers and 30-milers led to and through Hart Creek, right up to the base of the Hart Creek Canyon notch, with a climb above it onto a steep and thin ridge; the last loop for both distances followed the Hart Creek Rim Trail - a beautiful view looking down on the morning's trail.

Today I rode Rushcreek Mac and Connie rode Jose, and in the cool morning we zipped along the trails, over hills, through washes, weaving through sagebrush and big yellow rabbit brush to dry Hart Creek. We walked through the rocky creek, below the cottonwoods and willows with just a touch of yellow in their leaves, and the quailbush just beginning to turn maroon. There was one little spot of water when we crossed the creek at the Oreana Savannah (a hidden cabin), and Mac chose this spot to pee, right when the other horses were drinking. Argh!

"ARGH!" said everybody whose horses were drinking just downstream. But what could I do? You don't want to stop a horse in - pardon the pun - midstream, so, Mac just finished his business and we moved on. I of course never heard the end of that all day, "Hey Merri, did you let your horse pee in this water trough, too?" Argh!

Mac and Jose were both working hard enough this morning that Connie and I both dismounted to lead them up the stiff climb onto the ridge. By the time we reached the top, 4 of us were huffing and puffing, and we were quite hot in the cool air. Whew! That was my Dog Walk again for the day. Great views of the lowlands behind us and horses coming up the ridge, and the Owyhee Mountain range in front of us.

Back in camp, both horses passed their vet check and settled into their hay and alfalfa snacks. It's good for them to eat hay before they dive into their grain. After 15 minutes I mixed some grain up; Mac buried his nose in his bucket, and Jose turned his nose UP at his. What? Jose not wanting grain? Something was wrong! I noticed he was breathing fast, and he had a somewhat glazed glint in his eye... uh oh... you get that feeling of somebody punching you in the stomach because you know something is WRONG. And then I heard a weird noise - a gurgling, coming from his throat - Jose was choking! Connie and I immediately took him to the vets; Robert Washington, who said he'd never seen or heard a choke quite like this, worked on massaging his esophagus. The worst thing you can do is put water down their throat; it's best to let the horse work it out on his own if he can. Gene Nance asked if we'd been feeding him leafy alfalfa - yes we had; he said sometimes the dry leaves get all balled up and can get stuck, so it's better to wet them before they are consumed. (You can bet that we were over-diligent in tearing off the leaves of alfalfa and soaking it before feeding any of it the rest of the ride.)

After several minutes of Robert massaging, and Jose gurgling and trying to swallow, finally he gave a big sigh, licked his lips, and his eyes didn't look so glazed. Connie took him to the grass, where he wasn't real interested in eating but a few bites, but eventually, after Mac and I went back out on the trail, Jose went back to eating normally, with Connie keeping a close eye on him. Poor Jose! He'd never had any problems at a ride, and it was kind of rattling to watch him choke and to worry about him.

Sometimes Mac can be a big chicken if he goes out by himself, and it was easier just to put him behind company. On loop 2 it was my luck to latch onto good company in Frank and ("his publicist") Tom Noll, and Shahcolate Chip and his rider Jeff Stuart. There he was, the high-headed spirited Frank, working on his approximately two thousandth Owyhee mile, dragging Tom along with his reins double wrapped around Tom's hands (yikes!). "I started him on Adequan shots a while back, and they took 5 years off his life. Maybe I shouldn't have done that!" We decided if Frank wrote a book, it would start out like this: "All I ever heard out of Tom's mouth was, 'Slow down!' " The title of every chapter would be, "Idiot!" Have you seen the made-in-southern-Idaho movie Napoleon Dynamite? Frank, we imagined, uses the same tone of voice calling his rider "Idiot!" when he wants to go out front, and when he wants to go faster, the opposite of what Tom wants. We imagined that Frank uses this word quite often.

We moved right along on the 22-mile loop, across the highway to day 2's Vet Check, where we had no hold, but we stopped to partake of the water and hay still out there. It was in the low 80's today, and I let Mac fly toward home behind Jeff's big-striding horse and Frank (well, sometimes Tom used us for a speedbump for Frank, who was mightily insulted by that). I wanted to see what Mac was made of, how fit he really was, because his pulse rate had always been down to 60 or below as soon as we arrived at the vet checks in his previous rides. But it was hot today, and we were moving pretty fast for being only Mac's 3rd 50-mile ride. Back in camp for the second vet check, it took him 10 minutes to come down to the 60 bpm criteria. He hung at 70 for a while, then at 64. It took sponging with cool water, and standing in the shade to finally get him down to 60. Frank was a little slow coming down also, as were several others at this time of the warm day, one of the pulse takers said.

Mac trotted out well, and ate heartily during the 50 minute hold, but I was going to slow down on the last 16 mile loop, even if it meant I had to take ol' Spookums out by himself. But Tom wanted to slow down also (he did not consult with Frank), since he was aiming to complete all 5 days of 50's on Frank, and though Jeff's horse was fresher, he stuck with us. In the middle of the loop, when Mac was really dogging it, I told them to go on, but Jeff said, "We've been the Three Musketeers for this long, we may as well stick together!" As we were going out on our last loop on the canyon road, we saw the leaders coming in to the finish on the trail through the sagebrush off to our left. Canadian Jan Marsh on Morning Line (they also won Day 1) was in front, followed by, 50 yards back, Steph and Rhett. "I'm not going to catch her!" Steph yelled at us when we hollered at her. Rhett was tossing his head as he darted through the sagebrush, looking a bit miffed that he wasn't first back home. Following a few minutes behind them were 9-year-old Barrak Blakely and his mom Gabriella; Barrak was riding Alias, the same horse he'd been pulled on for a bruised foot on Day 1. Happily, they completed, Barrak finishing third. He was the only junior rider at the Owyhee Canyonlands!

Eventually moving up onto the Rim Trail, apparently we just missed a big fat rattlesnake, seen by Karen Steenhof who'd just passed us. We were caught by Lynne White, Chris and Kara Yost, and Nance Worman. Nance and the Yosts were working on their 4th day of 50's on their horses; Nance and Jazzbo had taken a tumble during Day 2 and Jazzbo had skinned his knees and his nose, but Jazzbo, tough little bugger he is, was still motoring right along.

Mac was acting so weary I insisted they all go on ahead, and only Tom Noll stayed with us. But wouldn't you know, turning for home, Mac found his second wind - more like a first wind, and I almost couldn't find the brakes! Yea - I know what he's made of now! We got to the top of Pickett Creek Canyon, and I got off to lead Mac down, and I decided to stay off and walk in, because I knew there would be no holding Frank back, and I didn't want to fight with Mac's brakes on the way in either, so, I took another Dog Walk (minus the dogs, who were probably busy mooching food off ridecampers) back home into camp.

Tom, Nance, Chris and Kara Yost, Kim Black, and Naomi Preston all completed their 4th day in a row on their 50-mile horses.

Besides the 28 horses on the 55-mile ride (25 completed), and the 18 horses (all completed) on the 30-mile ride, there were two trail riders who came to spend the weekend and ride. One was Phil Carroll and his Tennessee Walking Horse, Timer (Go Gaiters!). I'd met Phil at the Pink Flamingo ride in July, and again at the Old Selam ride in August. I'd been talking up the Owyhee trails, and Phil and his wife Margaret were able to come this weekend. Phil and his friend chose to ride the Hart Creek Trail - excellent choice! - and from the story Timer wrote, it appears they all enjoyed it.

Dr Peterson gave another InfoLecture, this one on the importance of warming up your horse in the mornings from the physiological perspective; I never had any class in college where the 'professor' had such rapt 'students'. Dr Peterson then segued into one of his terrific Cowboy Poems about the wilderness. If he doesn't watch out, we'll be bringing him here principally for the Education and Entertainment duties, with a little vetting thrown in on the side.
Posted by The Equestrian Vagabond at 5:34 PM