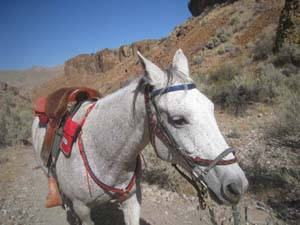 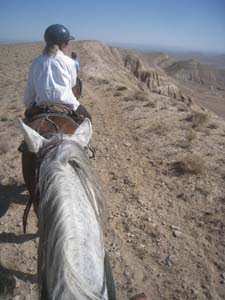 So, there I was, getting all fat and lazy this summer, when I got recruited to go back to endurance work. I wasn't real excited about that, but when Steph came up with the idea to breed me and Princess to that Creampuff stallion "Stoner" or somesuch next door, Princess was instantly in love, but me? Noooooooosiree I said! The humans thought they'd entice me and I'd come around by leaving me in the pen with the big stud (so he thought of himself) but after a few squeals and pretty well-aimed kicks, the humans gave up. Even after leaving me there for a few days I was totally uninterested. I wasn't having anything to do with that. I had my only baby Dudley a few years ago, and he broke the mold. I'd rather go back to the endurance trails than have another baby!

Well. They were serious about the endurance riding again. M kept taking me out, and making me work, up the washes and up the hills, working up big sweats, slowly slimming down my big belly I'd been working so hard to maintain.

And then, here came fall, and the humans became all busy with this and that, cleaning up, moving things around, driving off on the 4-wheeler with flying ribbons, and then one day a horse trailer pulled in, and another, and another, and well, I knew what was up with that. The 5-day endurance ride was about to start, and I was going to have to do an endurance ride!

I did a 25-mile ride one day, and I was thinking, well, this isn't that bad, but then two days later I got put in a 50-miler, and boy was I cranky by the second loop! By the third and last loop I was back into my rhythm and I rather enjoyed myself, but man - 50 milers again? I'd much rather be fat and lazy than have to work at endurance again.

In fact... that Cremello stud Stony next door really doesn't look all that bad. A few days after the ride, I decided he was pretty darn hot, as a matter of fact. And so, the humans took me next door to stay with him a few days.

He's my new boyfriend. See how good we look together? I think having another baby isn't such a bad idea.

Check back with me next September.
Posted by The Equestrian Vagabond at 7:54 PM