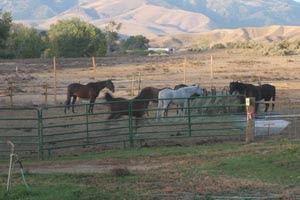 Jose was all revved up this beautiful morning, and he couldn't get anybody to play with him.

So he entertained himself.

Raced in and out of the hay pen, down by the girls in their back pen, up toward the mountains, back into the hay pen, around and around the other 6 geldings who either kept eating hay or looked at him like he was nuts. Around and around he went, tail up in the air, sprinting like a madman.

He kicked at Stormy as he went by, then stopped to paw, slam the earth, kick up dust, and he was off again.

Happy horse.
Posted by The Equestrian Vagabond at 8:15 PM