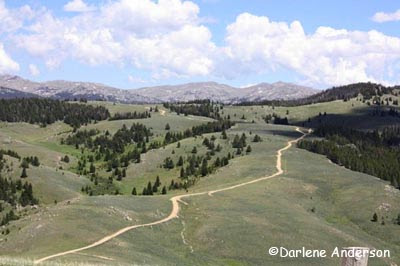 After weighing options and analyzing everything, we have (sadly) opted not to ride the Big Horn 100 this year. Main reasons are the expense of getting there, and the fact we'd given up the idea of riding it months ago due to expectations of high snow. Which was easy to conclude from weather reports in the winter/spring.

There were rumors that Tevis wouldn't take place on its regularly scheduled July 16 because of high snow levels, and indeed, in June, it was announced that the Tevis was postponed till October because of the high snows in the Sierras. According to winter snowpack reports, the Sierras were at 120 to 200% of normal. The Owyhee Mountains were at record levels this year. The North Cascades in Washington were 300% above normal. A record winter snowfall in the Grand Tetons had left an unprecedented snowpack as of mid-June. The Wind Rivers in Wyoming were 330% above normal. The Big Horn Mountains had above normal snows, and as we'd heard that would affect the Big Horn high trail, that's what we adjusted our ride schedule to counting out the Big Horn 100 this year.

And so the next best thing to riding it is, we're going to crew for Kevin and Rusty from Colorado, who both finished the Big Horn 100 last year.

Although... if Kevin and Rusty recall my dismal crewing fiasco at Tevis for Steph and Nance, (and I hope they don't), I will probably wonder, during the Big Horn 100, why I am being sent on an errand to I-Hope-You-Get-Lost-And-Don't-Get-Back-Too-Soon, Wyoming, to pick up 'supplies' such as Starbucks, or RedBull, for our riders.

If they don't send me on any errands, I promise to be a good crew this time.
Posted by The Equestrian Vagabond at 12:31 PM