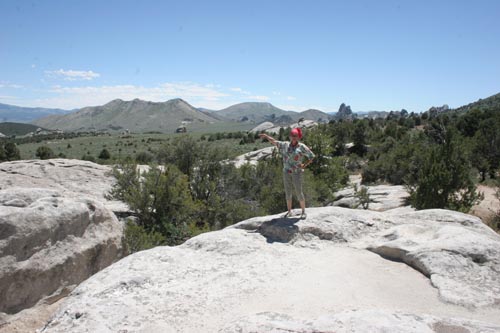 All it took was one glance at the City of Rocks National Reserve, south of Burley, Idaho, for Steph to become consumed with the idea putting on an endurance ride there.

Shoshone-Bannock Indians lived here before the pioneers' wagon trains blazed trails through the area beginning in 1843. The area was an important landmark for emigrants traveling the California Trail and the Salt Lake Alternate Trail, which pass through the south end of the park; if you know where to look, you can still see names and initials of emigrants written in axle grease on some of the boulders.

The park's name came from the description of James Wilkins, an emigrant passing through in 1849, who was impressed enough by the beauty of the landscape to write about it: "We encamped at the city of the rocks, a noted place from the granite rocks rising abruptly out of the ground. They are in a romantic valley clustered together, which gives them the appearance of a city." There are stories of a stage coach robbery from 120 years ago and buried loot under Treasure Rock. The area was established as a National Reserve in 1988. 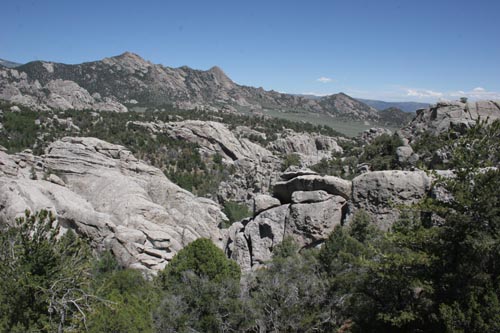 The unique geological jumble of spires, pinacles, and monoliths is made up of granite as young as 28 million years old, and as old as 2.5 billion years. The rock forms make the City of Rocks one of the premier climbing destinations in the US. The hiking and bird watching is not bad either. Maybe endurance riding will gain a hoof-hold here too.

Steph quickly snapped up maps of the Reserve, the nearby accessible Castle Rocks State Park (all equestrian-friendly, with even a couple of equestrian camping slots in a campground), of the surrounding BLM and Forest Service lands. By mid-morning next day she'd surveyed the region on Google Earth (and became really obsessed - Google Earth will get you every time!), talked to the BLM guy, who didn't have much info to share on the area, and to the Forest Service Recreation manager, who happens to be an old acquaintance from my Forest Service trail work days, and who is meeting us there next week to show us around the FS mountain roads/trails. He didn't know offhand of some ranch that would volunteer for our basecamp, but he did know a lady with Missouri Foxtrotters who rides up there all the time. Steph also contacted endurance rider John Parke, who has relatives around there and who has wondered about an endurance ride in the area. I wonder if the in-laws would want 20-50 endurance riders camped in their front yards for a week? 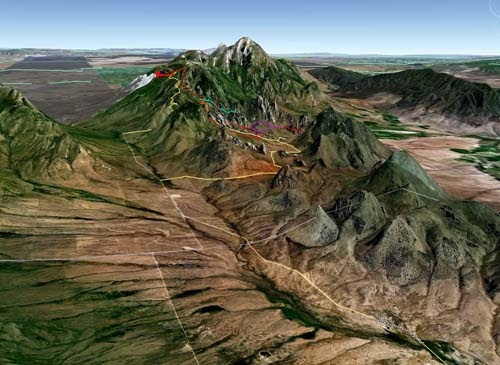 Elevation in the 14,000-acre National Reserve is between 5,720' and 8,861'; trails go from the Reserve right on up into the Albion Mountains (part of the Sawtooth National Forest) where reportedly there's a Skyline Ridge trail in the mountains that's 26 miles. (Do that both directions and you've got a 50 mile ride for one day!)

This is how endurance rides get started: somebody loves some particular area and wants to share it with other riders.

I can't promise Steph won't have us belaying our horses down the pinnacles or our trailers up and down the ravines of Granite Pass like they did with the emigrant wagons, but she'll probably come up with some fine scenic trails.

If we can find enough good ones, you might want to mark your calendar for July 2012.

Posted by The Equestrian Vagabond at 8:08 PM

I sent the link to this story to a friend that lives in the area. here's her reply:

yup...that is our city of rocks...in the past I used to ride it a number of times during the summer. there are a few tough climbs, a lot of rocks including slate slabs that require some careful walking across. I am pretty sure that they can get a 50 0ut of it without back tracking if they work at it. The top of the mt on the west side is about 10,000 ft. with a deep blue lake (Lake Cleveland)..Problem is some of the trails are narrow (only one horse at a time), on the side of a mt with a steep drop off, some cervices that are steep with sometimes a small water stream in the bottom. Some big cats up there as well..which you always have to watch out for.
Wild turkeys also and of course, snakes... It will take some very serious planning with the blm and fed...but it could be done.