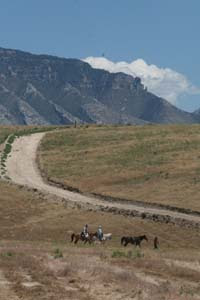 It's a rugged ride, this Big Horn 100. It's historic, legendary, magnetic, and it's been around a long time. It's been called "the longest continually running 100-mile race in North America", though the earliest reference to it I find is that the local riding club, the Canyon Cavaliers, "got the idea of doing a 100 mile ride in 1970". The first Tevis Cup 100-mile ride was held in 1955; perhaps the Big Horn statement refers to Tevis being cancelled because of fires in 2007. Regardless, the Big Horn 100 is one of the original, traditional, most beautiful, arduous, 100-mile rides in the country, and a silver Big Horn belt buckle is most coveted. Many people would probably name the Big Horn 100 in the top 3 rides in the country, along with Tevis and the Old Dominion.

And with the Big Ones, there always seems to be an aftermath in some form or another, with some participants.

The Incidents during the Big Horn 100 the last 8 years have been well documented. (Read the stories for yourself - http://www.endurance.net/international/USA/2010BigHorn/index.html and http://merritravels.endurance.net/2011/04/big-goal-big-horn.html.)

One of the consistent big problems with the Big Horn 100 appears to be lack of communication before, during and after the ride.

It's often hard to sift the truth from the rumors - and the rumors are plenty, because of lack of communication. Sometimes rumors are all that people have to go on. The following are some rumors/facts/guesses we heard before, during and after this year's ride, by people who knew, or said they knew, the area and the people involved with the ride, and by people participating in the ride. The Before Rumors affected Steph's and my decision to not ride the Big Horn this year. Whether the rumors were true or not, this was all we had to base our decisions on.

Rumors before, and during the ride:
The distance between vet checks 2 and 3 is 21/22/32/34/37 miles.
The vet check is just over the hill/The vet check is 8 miles away.
There's only one way off the mountain, you can't get lost/There were forks in the road-trail where no markings could be found indicating the way to go.

The following is the big Snafu of this year's ride:
The last 5 riders to leave Vet check 2 at 2:30 PM were told the distance to vet check 3 was 22 miles (it was measured by our riders on GPS to be 34 miles). Based on that statement, and due to one of the horses getting into trouble on the loop, and because there is no way of communicating at all by radio or cell phone in the ride, 3 riders stopped; one backtracked on the trail and found a camper, woke him up and paid him to drive him the hour down to basecamp and find a vet to bring him up with treatment fluids followed by a trailer.

The other two riders went on to the vet check to get help, thinking they were close to the vet check as they were going by the "22 miles" they were told. They got lost in the dark because the vet check was not close because the mileage they were given was incorrect, and because of inadequate trail markings for nighttime. They were finally found and pointed in the right direction and eventually led (in another adventure! but that's another story) to the vet check 3, where they arrived at 1:30 AM to find only their crew members waiting. The veterinarians had packed up at 10 PM to leave (with 5 riders still unaccounted for). The two horses, who were thankfully fine, spent the night fed and blanketed in a corral there and the 2 riders and 3 crew spent the night crammed in their truck there on the mountain, waiting to hear news of their other 3 riders and horses. The 2 riders and 3 crew made it back to camp at 6:30 AM; their two horses were brought down around 10 AM. (The other 3 horses and riders arrived at basecamp around 5:30 AM).

The fact that the Ride Manager was not at the ride meeting 8 PM Friday night to explain the trail or answer questions because she was still out marking trail/got stuck out on the mountain, and there was no other official ride person who knew what to tell riders (the head vet did the best he could, but he didn't know anything about the trail) was very disconcerting.

The fact that the trail between vet checks 2 and 3 was not adequately marked for riding in the dark - especially with the mileage discrepancy - is disconcerting.

The fact that there was no veterinarian waiting at vet check three for 5 missing riders is disconcerting.

Thank goodness we had perfect weather all day, unlike last year.

Though I find it comforting that every year, the theme of this ride by some participants is, "I survived the Big Horn!" or "Nobody was hurt!", I find it unsettling that things keep happening at this ride and people seem to expect something to go wrong, whether it's Mother Nature, bad timing, inadequate preparation, lack of sufficient help, or whatever.

It can't be disputed that the Big Horn is a very challenging, extraordinarily beautiful ride. Both are big reasons people keep coming to do this historical ride every year.

It also can't be disputed that there are problems with this ride. A wise horseman and Hall of Famer once told me, If something's not working, try something else. There are clearly some things not working with the Big Horn 100 and it's time something else is tried.

As a paid member of AERC whose rules govern the sport, as an experienced endurance rider and as a crew person, as a rider who is responsible for the well-being of my horse, I have expectations at endurance rides I attend.

Comparisons to the other legendary ride, the Tevis, are inevitable.
At the Tevis, I can expect:
Well marked trail for daylight and dark, well ahead of time.
Exact mileages between vet checks and holds, and the fact that there will be veterinarians waiting at them until all riders are accounted for.
Ride management or representatives at the pre-ride meeting who know the trail, can explain the trail and adequately answer any questions about it.
Radio communication or cell phone communication. Some kind of plan for communication. Evacuation plans for humans and horses.
Plenty of help.
200 plus riders so the chances are, if you are in distress, somebody is going to pass you to help or get help.
Drag riders.

At the Big Horn, you simply can't expect this.

That said, whether or not your Ride Manager tells you what to expect at a ride, you should ALWAYS go into the wilderness, for a 100 mile, 34 mile, 21 mile, or 5 mile ride, prepared for anything. Weather can change radically on a mountain at 8000' in an hour. You can go from being hot in a tank top to hypothermic in minutes. (I learned this the hard way one day by myself unprepared with a pack string in the mountains.) A Ride Manager should not have to tell you to carry an extra jacket, flashlight, your insulin or juice if you're diabetic, enough water, some food, whatever you need to last you for if you do get lost in the wilderness. You could fall off your horse and hit your head 5 miles out of the vet check and be disoriented and die for lack of clothing and a light before getting yourself out or being found. Riders should just carry this gear with them (preferably on themselves, not the horse who might leave you).

And that being said, the Ride Management has a responsibility to provide the best effort for the best experience for riders and horses. 100 miles on an easy course is a tough thing to ask of your horse (and often the rider!). The Big Horn is not a flat, easy course. Unpredictable things can happen in endurance, especially on a 100 mile ride, especially on a 100 mile ride in the wilderness.

I just can't believe the Ride Management doesn't care; I DO think the Big Horn folks want to put on a perfect ride, but when the same incidents happen over and over, for whatever reason, something is clearly not working. Try something else. Ask for more volunteers or pay them. Raise the entry fee so the riders help pay for this (at $150, the entry fee for the Big Horn is one of the lowest entry fees for a 100 that I know of). Find or pay people to pre-ride and drag-ride the trail. Find or pay people for radio communications. Try something different. I think most all people, including me, want the Big Horn tradition to continue another 40 years, though as one old timer put it, "There are only 4 of us left who know the trail."

On the other hand, maybe there isn't a problem, and I've just gotten spoiled by other endurance rides I've been to. I know one person who has mentioned being frustrated, but maybe everybody is satisfied with or has accepted the Big Horn 100 the way it is. From people I talked to, and reactions I saw at the pseuo pre-ride meeting, some of this lack of preparation and communication and information were not surprising. Maybe most people come to ride the Big Horn knowing the shortcomings. Maybe they come because knowing this adds extra challenge and thrill to the ride, and makes the rewards that much greater when you do finish, or come out unscathed.

The Tevis is not a ride for lightweights, and the Big Horn is NOT a ride for sissies. Those who decide to ride in the Big Horn 100 are courageous and I admire you. Those who overcome adversities to survive the Big Horn are tough and I salute you. And I can't even begin to express veneration for the horses who complete the ride.

WIth things how they are, I'm not comfortable subjecting my horse - and in my case it's someone else's horse - to this ride. I'll crew for friends, and I'll help with the Big Horn ride if I am able to volunteer and if my help would be accepted, but it's no longer on my Bucket List of rides to attempt. 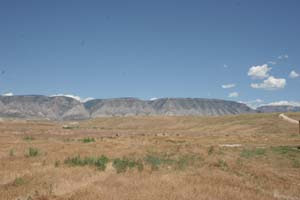 Posted by The Equestrian Vagabond at 2:59 PM

There are more than a few of us who are comfortable with this trail and this mountain, but your honesty is appreciated. Preparation and caution is essential in any high mountain adventure. Love the Big Horn. Laura.

Bravo!!! Your analysis is spot on. The Big Horn 100 is, all by itself, a huge challenge without having to deal with poorly marked trails, lack of management issues.
Barb McGann

I was comfortable w/the trail because I had a "guide". As a ride manager, I agree w/you wholeheartedly, Merri. As a rider, I'm dang glad I did the ride last year and not this year! I had big expectations of the ride this year because of Laura's involvement, but evidently even that wasn't enough to hold the RM's feet to the fire to provide as safe a ride environment as possible. I'm sorry, but well marked trails are absolutely a must. A MUST.
Makes me sad because this is truly a magnificent ride. I wish I was closer and had the resources to help.
Darlene Anderson
'10 Big Horn finisher. :)

Laura, like you I love the trail,love the vets,the people,the riders but I marvel at the luck ride management and riders have had with no contingincy plans for injuries to riders and/or horses. And the vet leaving the last vet check at 10 with several riders still out? What was she thinking
We all think with preperation this ride could be a premier ride-as it should be!