Beginning humbly in western Wyoming at 9500' as a little river running into Jackson Lake, the Snake River 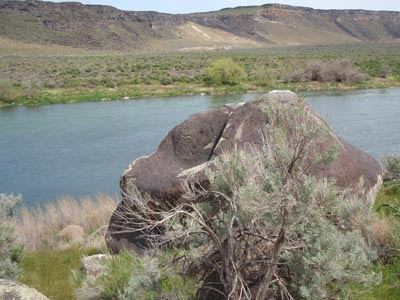 loops through the southern part of Idaho before emptying into the Columbia River in Washington.

When Lake Bonneville in the Great Salt Lake, Utah area breached its natural dam 14,000 years ago, its waters tore down the Snake River, slicing gorges, stripping sediments and debris, and throwing "melon gravel" about - huge, car-sized boulders so named because of their resemblance to big watermelons. Rolled and smoothed and polished and tossed around by the great powerful floodwaters, the boulders now litter various places along the river, planted in limbo until the next Great Flood comes to move forcibly evict them to their new homes.

Some of them served as art canvases for the Native Americans that wintered along the Snake - some of the petroglyphs have been dated back 11,000 years. 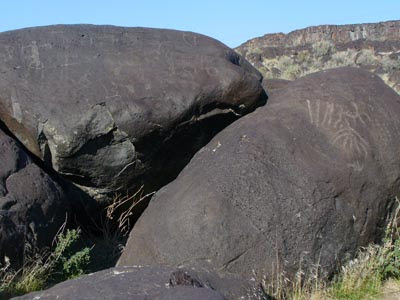 The Snake escorted Lewis and Clark's expedition along for 6 days in October of 1805; it became a major water source for an estimated 400,000 pioneers that used the nearby Oregon Trail in the 1840's to 1860's.

Today the Snake shadowed us on our mission: the Whiskey Traverse through a 'melon gravel' field along the Snake River, to find a connector trail between Celebration park and the Petroglyphs Trail we follow on some of the Owyhee endurance rides.

It's called the "Whiskey Traverse" because Tom Noll and his Owyhee mustang Whiskey first followed the footpath on horseback (well... they probably weren't the first, but they were the first to convince Steph a loop could be made for an Owyhee endurance ride). were in riotous bloom, and the grass mid-cannon-bone high i.e., high enough to grab the horses' noses) along the river as we made our way along a trail below the classic Snake River cliffs and buttes. The Snake was flowing wide and fast, and Jose was not so sure about it. In fact he was really uneasy about it the whole ride, eyeballing the rapids and deeper pools suspiciously from above and staying very close to Batman and Suz, and often getting goosed from behind. our horses twisted and turned and wove their way along a faint path. Some places were overgrown by tree branches and we had to flatten ourselves over our horses' necks; one part of the path was choked with thick willows and tumbleweeds that our horses bulled their way blindly through. When the going became questionable, Steph got off to scout the trail ahead on foot, while Carol and I and the three horses waited and got a taste of what it would be like to be eaten alive by buffalo gnats. They weren't bad when you were moving, but stop and you had a blinking "Fresh Meat!" sign on you.

Steph was gone scouting long enough we thought she might have jumped in the Snake and ended up in the Columbia 314 miles downriver, (Jose was looking for her), When scoutmaster Steph returned in one piece we mounted and rode boldly onward through the boulders, with only a few places being a bit sketchy, where the horses had to carefully look and think before placing all four feet, or step up onto a slab before picking their way over a spot, or (like superhero Batman) artfully balance on their hind legs and pick a spot to place his front feet. It brought to my mind the regular trails I always rode our pack string over when I packed for the Forest Service in the Sierras, and never thought twice about. My sure-footed steed Jose did make me think how lucky I was to not be driving a wagon through here back in 1860 and realize I took the wrong path and have to find a place to turn it around.

We successfully emerged from the other end of the half mile of melon gravel (I like that label), and connected up with the Petroglyph trail. Looks like this loop could be part of the Fandango ride. and retraced our steps through the boulders, then rode 3 miles downstream along the Snake to Celebration Park, Idaho's only archaelogical park, established 1989. Celebration Park has thousands of petroglyphs on the melon gravel below the canyon rim on the north side of the river. The other side of the Snake River. To get there, we had to cross Guffy Bridge. Originally built in 1897 to carry ore from the mining town of Silver City in the Owyhee mountains, to Nampa to be smelted, it's been preserved and renovated to allow foot and hoof traffic.

If Jose had been uneasy about following the Snake River all day, now he had to walk way above it! He was quite worried as we followed Batman and Suz,

his eyes wide and alarmed, his hooves clumping on the wood, as the steel girders passed us by, and the river ran far below. He kept looking worriedly between the river and me - the river and me. There was something just not horse-right about all this.

When we emerged unscathed out the other end, Jose licked his lips like crazy, and we all enjoyed the view Jose stayed very close to me when we crossed back over the Snake on the bridge, though it wasn't quite as scary this time. He still kept close to Batman and Suz on the path back to our starting point.

Along this trail are a few remains of old stone cabins, originally built by miners in the late 1890's to early 1900's. They were searching for the very fine "flour gold" - gold so fine it floats - of the Snake River canyon. Along this section were also a pair of Canadian geese sitting on a rock in the river, honking perturbingly at us, which made Jose worried about a goose attacking from behind and pecking him on the butt.

It was a beautiful day in which to be among the endurance horse pioneers of the Whiskey Traverse - a fun, challenging trail... but don't call Jose a river horse. He prefers his familiar route along the Snake River (by Wildhorse Butte) or, better yet, he prefers scouting and exploring the dry desert canyons.