"Having straight, level and flat is not always the easiest ride," said veterinarian Mike Tomlinson. That is the Git R Done endurance ride course: the biggest climb is approximately 3 feet. The trails are mostly firm sand two tracks that are straight as an arrow - for miles and miles. Eleven miles of straight on one loop, to be exact. It can be a bit boring, too, so one needs to keep focused and pay attention to your horse and keep him engaged.

Leonard Liesens, who came from Belgium to ride TC Mounshine in the FEI 100, echoed the same thought about the trail: "I think it is dangerous. You can go too fast; it can be hard to rate your horse."

The scenery, at any rate, was varied and beautiful. Held at the base of the Sierra Nevada foothills outside of Inyokern, California, the snow-covered peaks loom to the west, and the high desert was a carpet of spring wildflowers busting out in every color. The altitude is 2400', and the weather started out as cool - good for those horses still sporting winter coats - though you can always expect wind at some point in the ride. There are desert tortoises about - if you are very lucky enough to see them; here in the Mojave desert they are a threatened species. You might see or hear a burrowing owl (they can hiss like rattlesnakes when you ride by), though the resident owl - locally known as 'Tazer' - wasn't out in his usual spot. 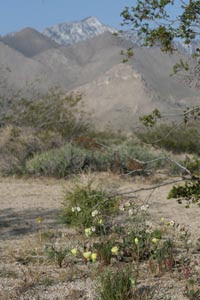 Ride base was at managers Callie Thornburgh (whose first endurance ride, I hear, was Tevis at 12 years old) and Daniel Brown's ranch; parking was the next ranch over. Sam and Joe first opened up their 'back yard' to endurance riders in 2006. In those days rigs ran over the sagebrush and creosote bushes in attempts to dodge the sandpits that many ended up getting stuck in and being pulled out of with a tractor. Since then, Sam and Joe have groomed their back yard by hand, landscaping with the native plants and making sand roads for driving on. "We enjoy the people, the horses, the sport; and we've known Callie forever, and they've helped us with our horses."

Eighty riders showed up to ride in either the 35, 55, 75, or 100-mile rides. A number were FEI riders, either still trying to qualify horses for the WEG in September, or to get their COCs. They came from as far away as Belgium, Namibia, South Africa, Montana and Texas, or as close as the next block.

Most impressive performance of the day was Sir Smith ridden by Jeremy Reynolds. They finished the 100 miler in 8 hours 6 minutes, looking as good cantering across the finish line as they did on the first loop starting out at 6:00 in the morning. They also won the Best Conditioned award the next morning.

Smitty has now won 14 of his 24 rides (50 and 100 miles) with 7 Best Conditions. His last race was the 160-km Presidents Cup in Abu Dhabi in February, where they finished 37th, in 8 hours 50 minutes. Then Smitty got stuck in quarantine for almost a month before he got back home. "He's an easy keeper," Heather Reynolds said, "and he lost a lot of weight. He was so happy to get home, he and the other horse ran around and around and around their paddock!"

When the strong wind kicked up around noon, on the course Jeremy tried drafting by turning his body perpendicular to the wind. He also thought he'd try crouching over Smitty's withers, like a jockey. "He used to be a racehorse, and when I did that, he took off! He got up to 20 mph, and I was hauling back on him, 'Whoa Smitty!' I had a cavesson on, so it was hard to slow him down!"

The 8:06 was his best time yet. "It's been a long road with this horse. He's phenomenal!" And it looks like he had plenty of gas left in his tank. Leonard of Belgium was not one of those finishers. TC Mounshine, owned by Christoph Schork and Dian Woodward of Global Endurance Training Center in Utah, was the kind of horse Leonard likes: strong and forward. "When I arrived, I sat in the saddle, I see he is balanced, and I know he is OK." He was hoping to get his COC on Mounshine for the WEG, but Mounshine was pulled for lameness after the 5th loop.

Another pulled for lameness was LV Integrity and Joyce Sousa. You might remember "Ritzy" - a gelding that excels at 100 milers. He's an 18 or 19-year-old (they couldn't quite remember!) gelding who'd completed 97 of 99 rides (25 of 27 100's) over his 12-season career. Their shoer had tried something different before this ride, so perhaps that was the cause of the problem. His trail partner, MC Gallantly, ridden by Joyce and Dennis' daughter Jennifer Neihaus, continued the ride, but was pulled after the next loop for dehydration. It was a good thing the wind picked up because it was getting hot... but the wind takes a lot out of horses, and humans too.

The Sousa's long-range goal this year was hundred-mile rides, including the Tevis. The two horses were fine the next morning, but they'd wait and re-evaluate their plans.

Scratches got the better of National Security and Doug Swingley, of Utah. 'Nash' had one little spot of a scratch remaining on a front heel from the New Mexico Sun City ride end of February. Doug put ointment on the spot to protect it from the sand, but instead of helping, the sand stuck to it and irritated it. After a few loops, the spot grew to the size of a baseball and Nash was pulled for lameness. Scratches can be a bugger to heal up. Suzy Hayes of Montana brought 4 horses to the ride - she left just before the worst snowstorm of the year at home. South African Lani van Gerve finished 4th on Suzy's handsome palomino Tezero's Gold. Suzy herself was eliminated for lameness (rider option) on RS Silverado. That was his 3rd 100-mile pull in a row. "That's it - no more hundreds for him. He's not a 100-mile horse!"

Tony Benedetti finished 9th (and got Best Condition) on her gelding Greenbriar Al Jabal in the 55. That's another handsome horse, gray and huge. He must be at least 17 hands.

15 of 22 riders finished the 75 (two elevated to the 100 and finished). Winner was Ceci Butler-Stasiuk from Texas, riding DJB K de Cielo, a two thousand mile horse, finishing in 5:59. Her husband Jason won the 55 on DJB KD Fantasia. Second in the 75 was Timothy Reynolds, riding Ssamiam for the Reynolds Racing Team. Heather reported in her blog on the ride that Tim got up before everybody on Friday morning and rode his bike 60 miles then went for a run! They got the 75-mile BC award next morning.

For those of you who don't know, Tim and Jeremy are identical twins. Most of us can only tell them apart if they are riding different colored horses, which they obliged us with yesterday - Jeremy on the chestnut Sir Smith, and Tim on the gray Ssamiam.

The Canadians Gail Jewell and Elroy Karius are touring about the west with 4 hopefully WEG-bound horses - two of them ran today in the 75. Gail rode the already-qualified A Salisbury Rose while Elroy rode Jolly Holiday on the FEI 75. Rose wasn't eating well after the third loop, and Gail spent extra time in the vet check until her horse looked and felt better. When she mounted for the next loop, however, Gail got very dizzy - she'd had a wreck 2 weeks prior - and with Elroy already out on the trail, and the wind to battle, she opted to retire. Elroy went on to finish 6th on his 8-year-old gelding. "This horse was a handful, until he finally did a 100-miler. Now he's all business, takes care of himself out there." He's a bit of a clown, too. "I left my tractor out in his pasture once, came back, and the keys were gone, tools missing." 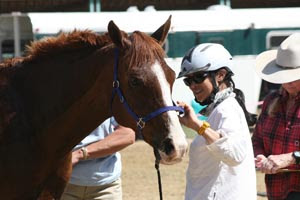 All but one of the entrants finished the 55 mile ride, and 14 of 20 starters finished the 35. It was won by Charisse Glenn, riding Karahty's Cayman, in 2:56. Charisse - riding an LD? That was only her 5th LD in 14 years of endurance. "It was a great ride!" she said. It was good for the horse - he had fun, she had fun; and afterward Charisse and her husband Carl went on to help her client Kelly D'Andrea finish third in the 75 on OSO Myszka (Kelly's second FEI ride - "she's hooked!" Charisse said), and another friend finish the 100 late into the night. Charisse also jumped in to help anybody and everybody in the vet checks the rest of the day, from sponging down horses to checking heartrates.

Pamela Slates finished only her second endurance ride on Sable in the 35. Living a block away, and befriending Callie Thornburgh, you can figure you'll eventually get roped into endurance riding. Callie wouldn't let her quit during the Twenty Mule Team 35 last month (when the weather was so horrible), and today's ride was so much nicer with almost perfect weather. Pam and her horse had a good ride, and although she hasn't promised yet to do a 50, you can figure she'll eventually get roped into it with a neighbor like Callie.

It was an excellent ride - good turnout, well marked trails, happy riders, no treatments for horses, and a superb performance by Sir Smith, a horse with an eye toward the WEG trail in September.
Posted by The Equestrian Vagabond at 10:44 AM