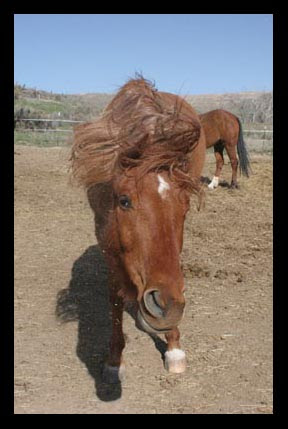 I gave up on Kazam.

See Failure to Communicate. (And remember he broke my rib - although I still stand by my assessment that was a legitimate scare for him, and had I been able to stay on - he didn't buck, just leapt in fright - he wouldn't have gone anywhere.)

His main problem was his anxiety on the way home from a ride. For those of you used to jigging horses, thinking "My horse does that," this was different from jigging. I've ridden jigging horses. With Kazam, there was an underlying anxiety/panic there that was more than just jigging. I tried a few things - heading him up the hardest hill (didn't work), taking him on handwalks, getting off when riding and walking him at random times (which helped a bit), leaving him tied up when we got home, working him harder at home so being out on the trail would be easier and pleasanter. Any of these might have worked if I'd kept it up and been consistent.

I could have tried more things - ride him out 50 miles one direction, haul him away from home to ride so he wouldn't have anywhere to get back to, as soon as he started getting anxious heading for home turn him around and continue going out out, etc... but I didn't.

I lost enthusiasm; I got depressed with the thought of having to work with a horse that kept showing little or no improvement; and if I had to miss a few days of riding, we always had to take a few backward steps to start things again. And if I was not in the right frame of mind to work a problem horse, I was not going to communicate well with him - I wouldn't be positive or be the alpha leader he needed.

I came to admit that, as much as loved Kazam and as much as I wanted to be able to 'fix' and ride him, I was not the person who could get him over his problem. Sometimes a person and a horse don't click, as much as you want it to happen. Sometimes horses just aren't suited for the work you have planned for them. And since my job is not really a Horse Trainer (I loosely label myself a Horse Conditioner who does some training), I gave up.

Steph gave him to the neighbors to work with and sell. We all figured Rick could get him over his problem - sometimes it just takes a different rider, sometimes it takes a man who's heavier and just has a different approach to riding; and Rick has handled plenty of horses with problems.

Rick took him out a few times and they did well; then one day out on the trail, out of the blue, no warning, Kazam bucked hard, threw Rick flying high, and he took off running towards home.

Rick walked back home, got right back on Kazam, and took him right back out. Things were going fine again out on the trail again and the exact same thing happened. No warning, hard buck, Rick flew, Kazam ran home. Rick walked a long way back home, and was going to get right back on Kazam and take him right back out, but Carol called up the neighbor cowboy and said, Come pick up a free horse if you want him. And Kazam was gone within the hour. He'll probably (hopefully) be put right to work on a ranch or the stockyards. That's what I hope, anyway. Work him hard. Wear his butt out. Make him too tired to buck and give him no place he wants to run home to.

This story is my catharsis - it took me a while to face my guilt and be able to write it... but it won't keep me from always feeling guilty. I didn't try my hardest with Kazam - and there you have it - I just didn't. I feel bad for Kazam; I feel sad for his brother Jose who enjoyed having him around. I feel bad. My biggest fear is a horse I love ending up in a bad home or in the kill pens (one of the main reasons I quit the racetrack), and this possibility - for yet another horse I've known and loved - will always be on my conscience.... along with all the others.

Steph and Carol both cut their losses... I guess I did mine too, seeing that eventually another broken rib or broken something else could have been in my future with Kazam.

I failed in 'fixing' Kazam, but I guess the moral of the story is, I'm not that bad a rider - it wasn't just me, it was him.

Doesn't make me feel all that much better about the outcome, though. 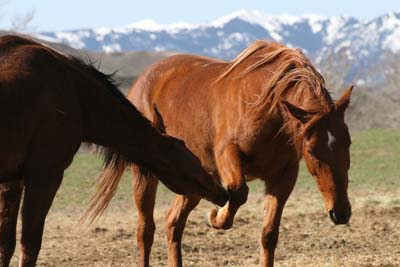 Posted by The Equestrian Vagabond at 3:16 PM

Merri, I'm sorry to hear about Kazam, but don't beat yourself up too hard. He wasn't your horse. It wasn't your job. I hope your guilt fades quickly and the lessons you learned with Kazam can help another horse be more successful.