High Desert I: The Spice of Life 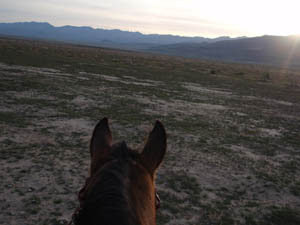 If you were at the site of the 10th High Desert Classic Endurance ride
by Stillwater, Nevada, during the ice age, you'd be swimming. The
huge glacial Lake Lahontan was roughly 8500 square miles and 900
feet deep in places. Over time, as the lake disappeared, it left
behind, in this area, freshwater marshes and rivers, brackish water
marshes, alkali playas, extensive salt desert shrublands, a 25-mile
long sand dune complex, and a small island in a desert lake. The
Stillwater National Wildlife Refuge, established in 1949, hosts
nearly 400 species of vertebrates, including lizards, rodents,
foxes, coyotes, deer, cougar (!), and 290 species of birds. If you
look to the Stillwater mountains, and several mountain ranges beyond
that, you can see the ancient water lines of the lake. On the
southern end of the Stillwaters, Grimes Point is one of the largest
petroglyph sites in the US. Some of the rock art may date as far
back as 7000 years. 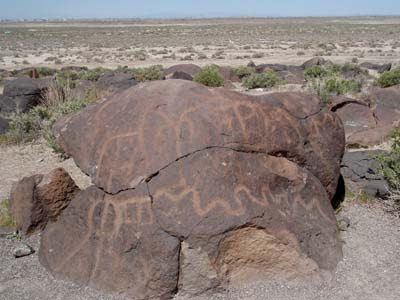 When Gretchen and I arrived at basecamp early Friday afternoon, we were one of only three rigs there. But by evening camp had filled up, and a few rigs were still pulling in after dark.

Gretchen brought me her horse Definetly Spice to ride. Spicey is a character. One might say, a dork. (I wrote a story on her 3 years ago, Spice is a Dork. My next story on her might be, "Spice is a Dork and She Likes It That Way.") One day she might be crabby (especially when a vet pokes her on the rump), and the next she might be a little angel. 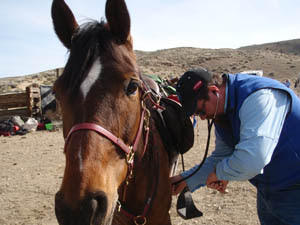 She'll still swing her butt right in your face to make a point, and if she feels like walking off while you're saddling her (she knows better), she will. Spice is ALWAYS HUNGRY, and she'll eat ALL NIGHT LONG at the trailer while you're trying to sleep (and this she did every night we were there). Most horses will pull hay out of a hay bag and eat it. Spice will jam her nose in the bag, grab a bite and slam the bag against the trailer a couple of times. I think it must taste better that way - food is here to be enjoyed to the fullest!

She still sometimes walks like a drunken sailor down a trail, and she still putts along with her neck and head sticking out a little to the left. And she has one speed. Steady. One might say slow. But no matter what your opinion is about it, that's her speed.

She's also got 2655 miles doing it her way. Spice and I had done 310 miles together over the years. 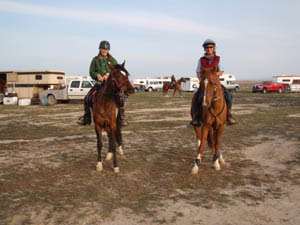 Gretchen rode her horse Kustom Kavalier - "Kav" or, as she sometimes calls him, "Kavalooney". They've done 300 miles since Gretchen got him in 2009.

Ride managers Zip and Nancy Upham advised us at the ride meeting that day 1 wouldn't be too difficult, but it was a true 50 mile ride.

And indeed it was. It kicked my butt!

The 50 mile start at 7 AM for 36 riders was calm and casual, as the sun rose over the Stillwater Mountains. One horse we passed at the beginning was Tulip, the all-time high mileage horse with over 21,000 miles... but the rider was not Les Carr! Middle of March Les had a fall from a new mule, and broke 6 ribs, a collarbone, punctured a lung, and had bleeding on his brain. When I asked him how he felt, he said "I just
don't think about it. I feel like I could jump on and do a hundred
miles!" but fortunately, Dave Rabe wasn't about to hand him his
horse. 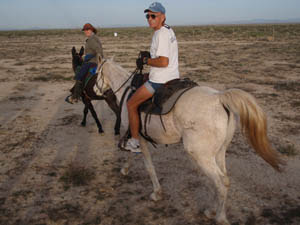 It was Dave's first time to ride Tulip, but with Dave's 47,000+ miles, (think about it - those two have done a combined 68,000 miles of endurance trails!!!), they probably had things figured out.

The trail took us up into the Stillwaters - 15 miles of gradual uphill, all the way to the first vet check. We trotted through a sandy wash and cross-country, then we hit a rocky road, then a very rocky wash. The rocks went on for miles, but those who have done Nevada rides take the rocks in stride, as just part of the scenery. We trotted when we could, walked when we had to. That formula will get you through just about any ride, including Tevis : ) . Next came a grand wash - like a highway - always gradually uphill, sometimes with red monster cliffs towering over both sides and squeezing the wash close around tight corners. These canyons must be absolutely spectacular during a flash flood - depending of course on where you're standing when you see one. We leapfrogged with 6 other riders, and Rob and Bubba the horse hung with us a while.

We had such a treat arriving at the vet check by some old corrals - our friend Carly had come to crew for her friends Tinker and Kay, and she crewed for us too. What luxury, to come into a vet check and have the horses' food mixed and waiting, and our snacks and drinks waiting for us too! 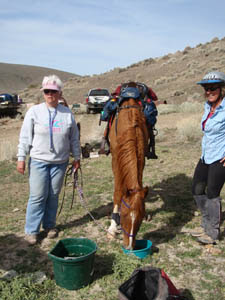 We only had a 15 minute hold here, though it took us several minutes longer to pull Spice's and Kav's heads out of the grain buckets.

Rob and Bubba the horse followed us out on the next 20-mile loop,
which took us on a climb up and up some more, to a high point where
we could see a couple of Nevada mountain ranges, including the
Sierra Nevadas 120 miles to the west. Spectacular! 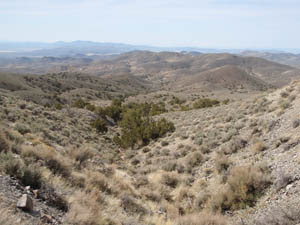 The ride managers didn't warn us about the next part of a trail - a turn up a narrow wash lined gauntlet-style by pinyon pines. Some that you had to throw and flatten yourself over your horse as she tried to scrape you off beneath. I think this was Spice's favorite part of the trail. : ) 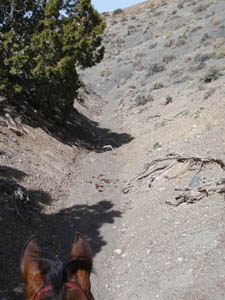 At a tank and spring, Dave Cootware and his riding buddy caught up with us. Dave was riding 22-year-old Talasmans Cruzer+/ (a tall horse - wonder how they fared under the pinyons?) who's getting close to his 4000 mile mark. Dave and Cruzer have had several firsts and Best Conditions at this ride over the years.

It was in the upper 70's - we stayed cool when we had a nice breeze in our faces, then got a bit warm when the breeze was at our back going the same speed we were. Our horses had winter coats (which Gretchen had shaved just a few weeks ago), so they had a sweat going. The 20 mile loop went on and on - gentle climbs and descents through the Stillwater hills, and good footing. There was plenty of water on the trails, either from springs, or water the Uphams put in empty troughs. There wasn't a horse that turned their noses up at the welcomed water. 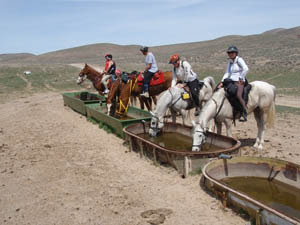 And the loop went on. I was hot n' tired by the time we got back to the hour lunch hold (*I* was tired? Spice was doing all the work), and Spice was - surprise - starving. Carly had the horses' food ready, and had chairs and our lunches waiting for us girls. Spice and Kav didn't pick their head up once during the hour hold from their hay and grain.

The 15-mile trail back to camp followed a different scenic route, all
gradually downhill, down more winding sandy washes, across a few
flats in valleys between the hills, and eventually, with 5 miles
left, onto the hard packed road. 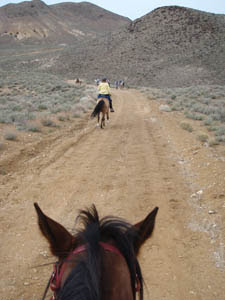 And it was here that Kav started favoring his left front. Dang it! We both got off to walk and lead our horses, and soon we could see ridecamp down in the valley as we worked our way out of the mountains. I'd been warned about this though: "You'll see it forever and you'll never get there!" And so it was. Our trail turned off into a wash (Gretchen stayed on foot leading Kav, I was already beat and I got back on Spice) and kept heading toward basecamp, which never got any closer.

Helen Mooney and Georgie Porgie were behind us. "It's cruel and unusual punishment, seeing basecamp for so long and never getting there!" We walked, and walked, and walked, for an hour or so, and eventually, we got back to camp and the finish. Gretchen, number 517, finished at 5:17 PM. Wasn't there some kind of prize for that? 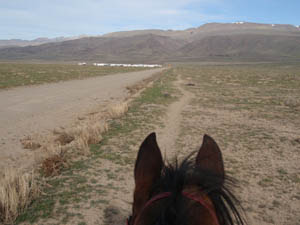 We held our breaths as Gretchen trotted out Kav for the vet: inconsistently lame in that left front! Dang it! She trotted him out a second time, for both vets, on softer ground. Dang it! Now it was a consistent head bob! No completion! Spice and I got a completion on Gretchen's horse - my 4000 miles, and she and Kav didn't. Just didn't seem quite right.

But we celebrated anyway - I had a Dr Pepper and Gretchen had my favorite beer, Pyramid Apricot Ale, and Spice and Kav ate. We also had a memorable dinner cooked by Quinn (this is the second time I didn't get his last name, and the second time he cooked a spectacular ride dinner). We celebrated my 4000 miles, a fun ride, a great trail, great company, awesome views, another chance to spend the day doing what we love doing - riding endurance.

Thanks Gretchen and Spice - here's to another 4000 miles!

(We opted not to do day 2 - I wasn't going to ride Gretchen's only horse and make her crew for me, though truth be told, I was WHOOPED! We headed our homeward ways the next morning after the ride started. I highly recommend this High Desert Classic ride - not too difficult and the scenery is quite awesome.

And notch up another 100 miles for Tulip!) 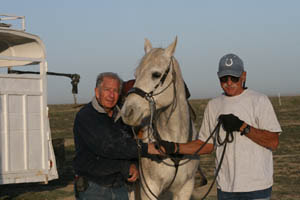 Posted by The Equestrian Vagabond at 7:11 AM