It has nothing to do with the date, or the summer solstice (which is tomorrow), but the advent of the Owyhee summer storms - like the spectacular intense and short one we had today (interestingly, exactly 24 hours ahead of the solstice).

Deep dark clouds built up over the Owyhee mountains. Even I could hear the thunder all around. Then suddenly - bang! It sounded like rifle fire. Crack! BangCrackBangCrack! A machine gun. Dozens, suddenly thousand of them, cracking off the metal roof of the house and barn, the ground alive with jumping white pebbles of hail - not just falling, but being flung down to earth so hard they leapt a foot back into the air.

The horses! I thought, and threw on a hat and jacket and ran out to the front pasture. (I'm not sure what I would have done if they were galloping in a panic.) They ran around briefly, but quickly formed into a tight ball, their butts hunched to the stinging ice balls, tails tucked under butts, some heads down to the ground. In protest they'd whirl around again and toss their head at the storm, then again turn their butts to it. The hail hurled and roared - on the roofs, on the grass, on the dirt, on my hat and on horse butts. It lasted just a couple of minutes - and it was past. 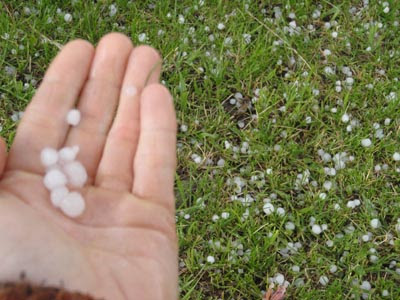 And the sun came out. 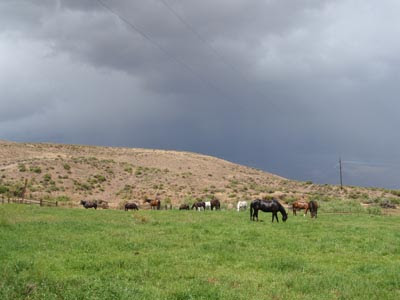 The horses went right back to grazing. A few of them had a roll to shake off the pummeling they'd had. After his roll, Jose came up to compare notes with me on the hail. And the sun shined, and the ice balls melted as the first real Owyhee summer storm moved on. Posted by The Equestrian Vagabond at 5:16 PM