We've been regularly riding out, and fast, but today was a different kind of ride. While we have some horses that you better have a good seat on (especially if you're in front, and you're going fast : ), we also have some that can take beginners out.

Andy and Pati passed through here in December and they've graced us with their presence again.

Today we took them on a ride, only the second time either of them have ever been on a horse - and neither of the first times were very comfortable.

Andy got on Dudley - the Dude - 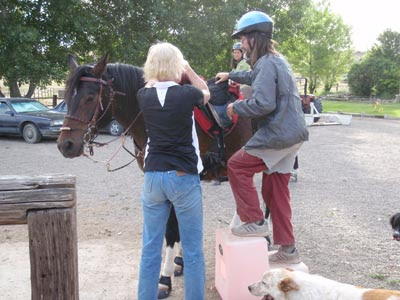 and Pati got on big ol' Krusty (ex endurance horse who ran in the US, the UAE, and a European Championship in France, and now thinks retirement, and eating a lot, are the best ideas in the world).

Krusty's a bit intimidating to behold for beginners, because - well, he's so huge. Pati's eyes were wide as Steph saddled him up, and they got wider still when she found herself sitting on top of him. He was a bit startled at first when I landed on his bare back (from a step stool! I can't jump 3 inches), and he launched forward, but in a few strides he understood what I was doing - though it felt strange for both of us - and he was agreeable (as he always is). Our horses plodded along like a good Dude string, heading up Pickett Creek canyon, up to the notch. 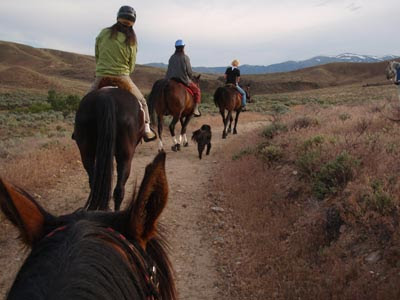 At the end of the mile and a half, I had a horsemanship test for the Dudes. "Everybody stop, turn your horses around to face me, and line up!" With a little coaching, Andy and Pati turned their horses around. Krusty thought he was headed home so he kept going. "Make him stop! Good! Now make him back up! You can do it!" And Pati did, getting him backed up and lined up with the string: the Owyhee Dude String. Andy and Pati look like naturals in the saddle, don't you think? Posted by The Equestrian Vagabond at 11:08 AM