Owyhee Fandango Day 2: It's All About The Trail! 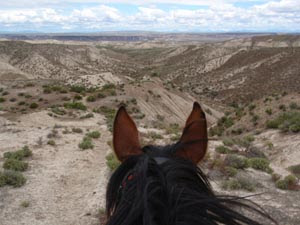 "50 milers: Loop 1 is green," said ride manager Steph. "Or maybe green and yellow, because it's so green in the desert right now, that the green ribbons are hard to see. Or there might be some orange... or pink... or blue... just follow the ribbons! If you are following ribbons, you are on the right trail!"

This year's Owyhee Fandango wasn't FEI, so the atmosphere was much more relaxed, (did I mention the Happy Hour every evening at 5:30?) although Steph did wake up once or twice before the ride, from nightmares that the cows ate all the ribbons off part of the trails. (Which is a good possibility.) The Raven and I saddled up Jose again for another 50 mile ride with his pals Quinn (and Nance), Jack (and Kara) and Turbo (and Chris). It was another lovely partially overcast day (I LIKE cloudy days, so sue me! : ) with a chance of rain, but warmer. And after yesterday's dire chance of rain where we got not a drop, we weren't very worried about that today.

The 25 mile first loop to us to the southwest again over the familiar Hart Creek trails - out to Hart Creek, with an extra Brown's Creek loop thrown in for the 50 milers (that the LD's didn't do), and back to Hart Creek and the old Hart Creek Homestead. If you've been to an Owyhee ride before, you've probably done this loop, but I doubt anybody gets tired of this one. It's just beautiful. This is the trail we take visitors that we like on.

Richard White caught up with us not far out of camp and followed us down the trail on his daughter's pinto mare. After a couple of miles of trotting, we all stopped in Hart Creek for a drink, and Richard dismounted to do something with his mare's bridle. He told us not to wait for him, so we went on. Jose was eager and forward beneath me again, moving as easily and strongly as he had on Day 1. Our four horses again moved along together well, all comfortable going at the same speed. The Raven was happily bouncing in his Raven bag on the saddle. The four of us riders sometimes told stories as we rode along (do the horses do this with each other?) and sometimes we rode in silence, listening to our horse's hoofbeats and soaking up the sagebrush desert and mountain scenery.

The Brown's Creek loop down a sand wash and on 2-track roads disappeared under Jose's feet, and soon we were back at Hart Creek at the Homestead, and climbing up onto the sharp ridge back onto the flats. The Hart Creek drainage opens up below and behind you while the Owyhee mountains suddenly emerge ahead of you and start to grow on the horizon. They aren't so tall (Hayden peak, aka Cinnabar mountain reaches 8403'), but they dwarfed the horses ahead of us.

A few easy miles and we were back in basecamp for our hour hold. There we heard some talk of a loose horse on the trail this morning - and a guy walking a long way back with his bridle - a pinto horse - and realized it was Richard White. When we left them at Hart Creek, Richard's horse must have left him! We felt a bit bad about that. Turbo passed the vet check, but after waiting an hour, Chris detected a problem with one of his feet, so he opted not to go back out with us. So it was us three girls and three geldings on the last 25 mile loop that took us to the northeast toward the Snake River across the highway.

And oh, what a trail! I'd never been on this trail before, and neither had Jose. After going up a 2-track road into the Snake River Birds of Prey National Conservation Area, and turning to follow a ridge briefly, we came to a point that overlooked another set of Badlands stretching down toward the Snake River in the distance, marked by the black canyon cliffs. The trail led right down into the maze of hills and miniature alluvial fans.

As he likes to do, Jose stopped a moment at the very top of the hill to Deep Think - observe and absorb the view - and then he plunged forward enthusiastically. I could just see the edge of his eyes, which were wide and bright. Down we trotted boldly for a couple of miles along the narrow trail, winding along the ridges and sidehills of these Badlands, and when we eventually made a left turn onto a road down on the flats, Jose never missed a beat. This road dumped us into a sand wash - and, Oh what a trail!!!

Bordered by high walls, twisting and turning, snaking back and forth, we motored powerfully up this soft and smooth sand channel that had been carved by some serious water action over time. It wouldn't be a place to hang out in heavy rains. Jose had a ball, blasting up this wash, zooming around the blind corners, ears pricked forward, mane flying in the breeze he made, eager to see what was around the next bend, not hesitating for anything except when the wash squeezed together in a few places, tight enough for the sagebrush to graze my tights as we trotted through.

It was all uphill and I thought to slow Jose down a bit to give him a breather, but he wouldn't have any of it - a wash like this is meant to take fast and furious and fun!! He was so sure of himself. He made me laugh. A couple of times I video'd it with my camera (and therefore wasn't paying attention to the trail) and twice the trail split in the wash, and I leaned one way and Jose went the other and I had to grab on to stay in the saddle.

Once our trail left the wash and climbed a short steep hill, we let our horses take a breather, but soon they were off again. They made a great team again, trading the lead, keeping the same comfortable pace with each other. As we climbed one more hill on the last few miles of trail back to the highway, from behind us we heard an equine freight train coming: Rocky, the huge half mustang half monster of Dick Root's. Dick has such endless patience with this big old guy. He'll spend hours in a ride finessing Rocky into behaving (because you can't outmuscle him). Dick spent Day One of the Fandango doing a lot of finessing. Today, halfway through the ride, Rocky was responding well to Dick's requests (mostly not to pull and chase down other horses... like our horses), and as a reward, Dick let him roll.

And when Rocky rolls, you can hear these big monster feet (size 6 shoe) in the distance - CLOP CLOP CLOP CLOP and his steam engine breath - WHOOOSSSH WHOOOSSSH WHOOOSSSH, and this huge daunting creature roars up behind you and is gone before you can say "Go Rocky!" We sang the Rocky theme song as they steamed past us. (On the last few miles in, Rocky was misbehaving again, so Dick took him back, and off the trail, and waited him out, and they ended up finishing behind us.)

We got back to the water tank at the highway crossing, where a radio guy took our numbers again. I got off Jose, hoping he'd drink a bit better. You always wish your horse would drink and eat more. Jose doesn't drink enough, and besides, he always has to look around and observe and absorb and Deep Think first. He's like me with a cup of coffee: he likes to take his time and sip and enjoy it. When he's done gazing, he'll drink a bit. Then he'll look around some more (holding the water in his mouth), and when he's done, he'll drink a bit more. Sometimes if I get off, he'll tend to drink sooner or better. 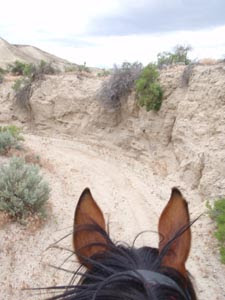 When Jose had his fill (not enough in my book), I stepped up onto the edge of the water trough to get on him easier and Jose started walking off before I was quite ready to put my foot in the stirrup and before I'd really gathered the reins. However, seeing I was starting to lose my balance (backwards) and I didn't want to land in the trough, I had no choice but to jump quickly and aim my butt at the saddle.

I landed kind of hard on Jose's back, and he leaped off into a trot, but luckily I'd landed square and I was able to scramble the reins together and get him stopped. That was my only attempt at ever becoming a Trick Rider.

Our horses zipped the 8 miles back home, as strong coming into basecamp at the end of a hundred miles in two days as they'd been at the first dozen miles. It's just like nothing else, riding a very cool horse on a very cool trail.

And with the completion at the finish, Jose hit 1000 miles! Meanwhile, over an hour in front of us, Christoph Shork and his 3000-mile horse DWA Powerball won the ride again - they won Day 1 also. There were 3 Drinkers of the Wind Arabian horses in today's ride; besides Powerball, DWA El Paso and DWA Sampson finished the 50.

Elly Burnett and her horse Jasper O'Brien finished the 50. Tomorrow DOCTOR Burnett would be vetting Day 3 of the Fandango - her first endurance gig as a newly graduated veterinarian!

Bringing up the rear in next-to-last place was Rebecca Jankovich of Reno and Moose (Simply Irresistible). 20-year-old Moose, (now 5525 miles), and Rebecca have excelled at multi-day rides since Rebecca started riding him in 1999. Moose has always been a fireball and still has his own firm opinions of how fast they should be going. Rebecca was riding with her trainer Kathy on MS Donnas Star - until she just couldn't hold him back anymore the last few miles.

Just don't tell Moose he was almost the turtle today.
Posted by The Equestrian Vagabond at 1:11 PM