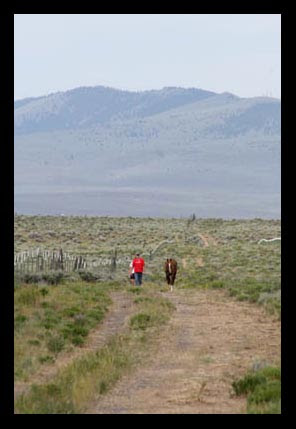 Chris and MONK take a walk (above). This little puppy was literally thrown at Charisse a few days before the ride when a couple of drunks drove by in a pickup. "She looks good with you. Give us some gas money." So for $23, Charisse had a new puppy. We suspect she was stolen from somewhere - she wasn't hungry and her belly was full; and she was already smart (made her way each night to the back of the horse trailer to relieve herself, came when called (various names), and stayed around Charisse's trailer even if she followed people or horses around). Carl was resistant to having another dog. "We have enough mouths to feed at home already!" The Raven slept with and watched over the puppy. See how resistant Carl is? Soon Puppy was following Carl everywhere. "She's not my dog!" No sir, certainly not. Charisse and Talon, Christoph and Stars Aflame head out on a loop. Pamper your rider when she comes in to a vet check! The Bucket Brigade lines up and waits for incomings (horses). The Bucket Brigade in action. A group on a loop in the desert. This enthusiastic soul has tattooed the name of his horse on his arm! (You know who you are!) Jeremy and Smitty head out on a loop. Resting at a vet check under a tent. US Team Veterinarian watching a horse trot out. Heather and Sam, Jeremy and Smitty out on another loop. "This is not my dog!" (Famous last words by Carl. The puppy has now been named "Saka" after Sakajewea, an Indian woman we all know who was stolen from her family then sold or gambled away to her husband. Saka now has a great new home with Charisse and Carl and is part of Team Malibu Endurance.) Posted by The Equestrian Vagabond at 3:52 PM