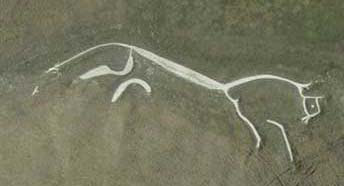 Same goes for the documentaries that accompany each movie (about 6 hours per movie) - I watch them at least once a year, especially for the inspiration. The artistic genius of the people who put this film together is simply astounding - from the illustrators to the designers and sculptors and builders, to the director, the lighting and sound and photography. I see something new every time I watch it.

In talking about some of the cultures of Middle Earth that were created, and the accompanying incredibly detailed carvings on the buildings, and the stitching on clothing and armor of the Rohirrim (the Horse Lords) and their horses, a picture flashed on screen of the Uffington White Horse.

This is an actual geoglyph in the south of England - a work of art made from moving earth or stones around, or carving hillsides, within a landscape. It's 374 feet long, made from carved trenches in the earth filled with white chalk. It's estimated to be 3000 years old, dating between 1400 and 600 BC.

The definite reason for this horse has not been determined, but I like the possibility that it was created for religious purposes, since evidence exists of horse worship in the Iron Age.