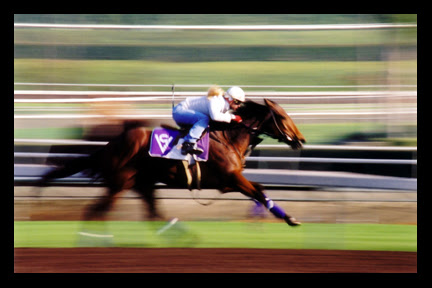 Tonight's the night. The ultimate Thoroughbred racing showdown. It won't be on the racetrack, but in the Beverly Wilshire Hotel in Beverly Hills, California.

It's the Oscars of Thoroughbred racing.

Year-end Eclipse awards will be announced, including Horse of the Year.

Both mares will undoubtedly be champions of their divisions, but which will be Horse of the Year? Will it be the freak 3-year-old filly Rachel Alexandra, winner of all 8 of her races in 2009, including the Preakness, Haskell Invitational, and Woodward Stakes (first filly to win it) against males?

Or will it be the freak 5-year-old mare Zenyatta, winner of all her 5 races in 2009 (to remain undefeated in 14 starts), including the Breeders Cup (first mare to win it) against males?

In addition, Zenyatta's owners, Ann and Jerry Moss, who had announced her retirement after her historic win in the Breeder's Cup Classic in November, have returned Zenyatta to training. A huge gamble for the now-6-year-old mare, with a 14 for 14 record. It's doesn't get any easier for the older horse on the racetrack, facing those fresh youngsters.

Now, whichever mare is named Horse of the Year for 2009... there is still a chance they will meet on the racetrack.

By 10:30 PM (eastern) tonight, it will be all over but the weeping and cheering - for the people. The horses won't know or care one way or the other - they both know they are great.

Steve Haskin of The BloodHorse.com has a usual excellent article summing up Rachel's and Zenyatta's accomplishments for 2009 here. Posted by The Equestrian Vagabond at 9:42 AM