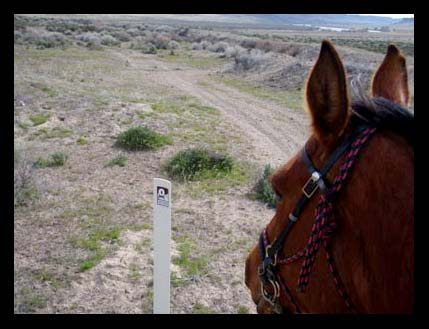 This was the day, come rain, sleet, snow, hail, wind, heat, cold, Carol and I were going a 20 mile ride, no excuses, no whining. Jose and Justy needed a good long ride, with the 50 mile Tough Sucker coming up next weekend. Justy needed some wind taken out of her sails, and Jose just needed to do a long ride, as he hasn't had one since November 1st. Come to think of it, Carol and I needed a long ride too. We headed north up onto the flats, to and across the highway, and toward Wild Horse Butte along the Snake River. The cold wind blustered and made our eight eyes and four noses water, but our horses trotted along handily at an average of 9.5-10.5 mph.

We'd already hit around 10 miles when we got to Wild Horse Butte, so we opted to not go all the way around it, and instead of turning around, we took a different loop back - taking trails we knew, but trying to guess where we'd exactly we'd end up.

We followed the Oregon trail for a while (somebody seems to have made it their mission to break all the BLM Oregon Trail posts along this section), and instead of following the usual trail into the neato winding deep wash, we missed it, and ended up following a new road. I thought at one time I knew exactly where we were... but I'm still not sure if I was right. Things sometimes look completely different when you're moving the opposite way. 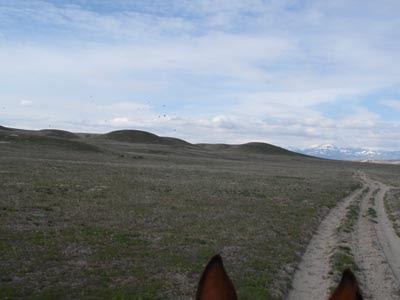 We trotted onward, following a soft two-track road that eventually petered out onto a hill that eventually ran into... a road we knew that led us right back to the highway. Saved!

We missed another shortcut trail back and ended up touring through the tiny berg of Oreana (I'm pretty sure Jose has never seen it), then we followed our usual trails back home. 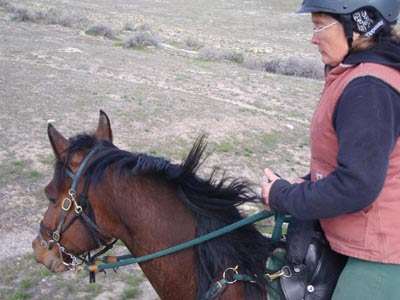 25 miles, 3 1/2 hours, and we trotted most of it; the horses were fresh, we humans were not cold or wind wimps; and we discovered a new little trail and an overall great loop: the CAMWHAB trail: 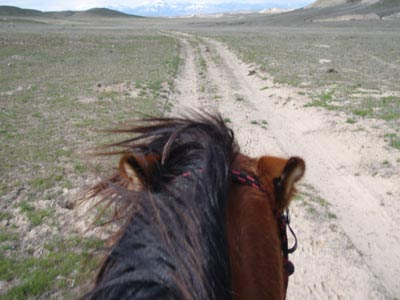 Jose pinning his ears at his cousin Justy.
Posted by The Equestrian Vagabond at 5:36 PM