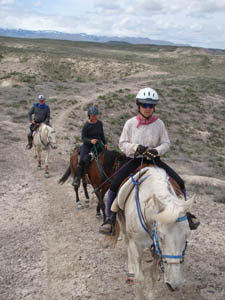 7:30 AM, sunrise, The Raven is ready to ride the 50 mile Tough Sucker with Jose. Jose is ready to ride with Rhett; Rhett and Steph have snuck off with Amanda and Replica. Jose and I will ride with his other bud Mac (and John), and his cousin Justy (and Carol). We let the 11 front runners get going down the trail as we wandered around camp warming up.

Five riders had already left on the 75-miler at 7 AM; 18 were on the trail for the 50; and 16 would start the 25 miler in an hour, including two who were just pulling in: Jeff and Mary. The same Jeff who bought Ben last week. Jose recognized Ben tied up to their trailer, and briefly stopped his search for Rhett to stare at him. "How is he?" I asked. "Jeff's in love," Mary said.

As Rhett's high-flying short tail disappeared over the first hill, we three set out on the trail. Jose knew Rhett was ahead of him... and he was determined to catch up with him. He concentrated on it for the first 15 miles. Our shadows pointed the way toward the Snake River and Wild Horse Butte. Lynne and Agnes caught up with us and joined our group. We met Cindy and Bo at the water stop on the Snake River, but we couldn't pause long because Jose was still after Rhett. Mac and John made a pretty picture over the Snake, flowing high but smooth as glass. Even Jose was digging the trails, even after he forgot about catching up with Rhett. Especially today, when JOSE was in charge of leading the pack, making sure everybody stayed BEHIND him. He was incredibly motivated all day, even when he forgot about catching up with Rhett. We were moving a little too fast for Mac, and a little too slow for Jose, but he was so strong, I wasn't going to fight him and hold him back more. We reached a decent compromise, and he flew along so powerfully all day, never drawing a deep breath or feeling tired. Getting close to camp for the first vet check, we'd stopped at a water trough at just the right time - when a pack o' mules came racing down the trail. We were glad they hadn't run up behind us! They were, in fact, racing mules from Oregon, on the LD (4 of them ridden by juniors), all having a fine time. We gave them plenty of time to get over and past the horizon, so our horses wouldn't feel like racing them in. Our horses all vetted through for the hour hold. Rhett, tied to Replica's trailer, and Jose and Mac whinnied at each other, but they'd settled into their herd for the day. Horses and humans ate and rested. Jim Archer enjoyed his rest while his wife Vicky took care of his horse. (Vicky will have her turn... she is healing from ankle surgery.) Then it was back out onto Loop 2, for one of the best trails in the Snake River Birds of Prey Conservation Area, a soft two-track that winds along the rim of a series of Badlands bluffs overlooking the Snake River drainage to the north and more hidden Badlands basins to the south. Moving gray clouds and scattered rain showers and sunshine painted changing hues on the hills as we trotted along. 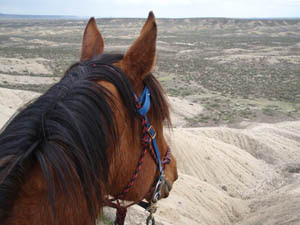 As is his wont, Jose had to stop several times on high points to take in the panoramic view. WIth his elf eyes he spotted riders far in the distance - probably Rhett and Replica - I never did see them. And almost too soon, we were coming back into camp for the finish. I never get tired of these trails, and I never cease to be amazed at endurance horses. Jose was phenomenal all day. He could have easily gone faster, and he could have easily done the 75 miler. All our horses finished sound and happy (in fact there was only one metabolic pull all day in all the distances, though it wasn't serious).

Only one brief shower fell all day - after we'd finished, and just enough to spread the perfume of sage in the air. The weather and Regina Rose's trails had been perfect. Which would you rather have: the one- or two-season horse that can run 100 miles in 6 hours, or the horse you can ride for several thousand miles for 10 years or more? I know which goal I'd aspire to. Thanks for another great ride, Jose! Mac, after a well-deserved nap.
Posted by The Equestrian Vagabond at 10:21 AM

"Which would you rather have: the one- or two-season horse that can run 100 miles in 6 hours, or the horse you can ride for several thousand miles for 10 years or more? I know which goal I'd aspire to."

Me too - go for the enduring horse!