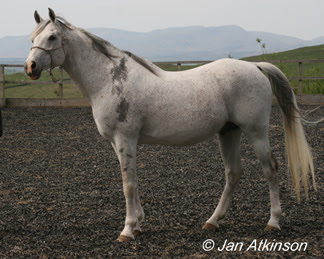 Allah created the desert Arabian horse from the South Wind, "Men shall follow you wherever you go...Thou shalt fly without wings."

The Prophet Mohammed was wounded in battle. As he rode his treasured pregnant Arabian mare to safety, he dripped blood from his wound over his horse's shoulder as she bravely carried him away. When they reached his tribe, the blood on the mare's shoulder could not be washed off. When she foaled, the foal was marked with the same 'bloody shoulder.' Horses that thereafter carried this 'bloody shoulder' mark were prized and said to be blessed.

The gray mare Blue Bandaila (Cally), started it all in 1989 for Jan Atkinson. Cally was the first horse she'd ever bought - stumbling upon her when she went to the wrong farm to look at a horse for sale. Cally coincidentally happened to be over 75% Crabbet, though that was not a factor in Jan's choice at the time. Cally was a 3 year old at the time, and after Jan started riding her, they covered the fells and valleys around home, and they soon found the sport of endurance. The gentle mare was a dream horse, "fiercely competitive, tremendously brave and surefooted when on rough ground or the high fells of the Lake District. She changed my life."

And, you know how it goes, Jan says: "Once you buy one horse, then you seem to acquire more..."

That's how she ended up buying Hamatan, a mare who was 100% Crabbet. Because of her, Jan decided to buy a 100% Crabbet stallion, and start breeding that particular type of horse.

That's what led Hanson to Seren Arabians. All Jan knew was that her stallion had to be pure Crabbet, he had to be gray, and he had to be the right size (big).

Jan looked at a lot of colts and stallions, but for one reason or another, they never were quite right. At some stud farms, the groom would hand Jan a whip or a stick to brandish at the stud while handling him. At one farm, the groom made sure he always stood between her and the stallion. She came to add one more item to that list of requirements: her stallion had to be kind and easy to handle.

Jan spent two years searching before she found him, in 1994. She made her way to Geoffrey Plaister's Imperial Stud, to look at 6 colts and stallions, nearly all of them full brothers... and Hanson was It.

"I immediately felt comfortable in a stable with him. I'd have never found another horse anywhere near what he was. You know how you just know when you've found something? Hanson was The One."

And he was. He was 6 years old, gray and big - 15.2, a classic looking 100% Crabbet horse, and powerful, but with a very gentle disposition. And Hanson was not just Crabbet breeding, but his parents (Hanif* x Sherilla) were bred at Crabbet Park. This helped Jan and Dom decide to not only breed Crabbet bloodlines, but to narrow their focus and to stay as few generations from horses foaled at Crabbet Park as possible.

Hanson was a delight to ride, and a pleasure to be with. Perhaps prophetically, when he was around 12 years of age, he began to develop the 'bloody shoulder' mark - and by the time he was 20, the mark had grown, and he had 'drops of blood' trickling down his foreleg.

Tragically, Hanson died suddenly last year, at age 21, after being collected for the assessment of his semen. And in a double blow, Cally suddenly died a month later from lymphoma, after having foaled Perdu.

Perhaps Hanson had been specially chosen to be blessed by Allah, or by the South Wind, or by the Horse Gods. And while he obviously was lucky to have a home at Seren Arabians, it's the Atkinsons who feel blessed by his presence.

"I've been very lucky, very privileged to have had him."

More Seren Arabian stories, and photos at:
http://www.endurance.net/international/GreatBritain/2010SerenArabians/
Posted by The Equestrian Vagabond at 1:08 AM