The Crabbet Stud - A Brief History

Mesaoud, a foundation sire of the Crabbet Arabian stud, imported from Egypt to England in 1891

The story of the English Crabbet Park Stud and the lines of pure-blooded desert Arabian horses produced there since 1878, has all the ingredients of an epic soap opera. It is a tale of ambition, riches, success, blue-blooded horses, mismanagement, survival of the fittest, scandal (for the humans) and tragedy (for some of the horses).

Wilfred Scawen Blunt and Lady Anne Blunt decided to import to England and start breeding Arabian horses after their travels around the Middle East, where they encountered some of the world's finest Arabian horses. Their Crabbet Park estate in Sussex, England, was the birthplace of their line of Crabbet Arabians.

Their stud farms - Crabbet Park in England and Sheykh Obeyd in Egypt - produced exceptional horses throughout the decades - though some of the horses suffered (and died) from neglect, mismanagement, and ignorance - and eventually human scandal and self importance interfered with and undermined the horse breeding program.

Mistresses, "tyranny and spirit of discord", temper tantrums, and apparent drug abuse led to a physical separation between Wilfred and Lady Anne, and a split of the Stud farm and horses. What followed was more discord, lawsuits, feuding, shot horses, neglected horses, injunctions, and, eventually, gradual recovery and rebuilding of the horse program as the Stud passed on to the Blunts' daughter, Lady (Baroness) Wentworth.

Pure Crabbet horses occasionally trickled out into the world during times of family feuding and economic necessity (necessary even for rich royalty!) - including to America, namely to the Maynesboro stud in 1917, and the Kellogg Arabian Ranch in California in 1920 and 1936. This is where the Crabbet-Maynesborough-Kellogg - CMK - lines in America eventually came from.

The Crabbet stud was once again flourishing when Lady Wentworth died in 1957. The estate and horses passed on to Cecil Covey, the son of Lady Wentworth's stud manager. To pay the 80% death taxes on the estate, Covey had to sell almost half of the stud's 75 horses. The American breeder Bazy Tankersley and her Al Marah stud ended up with 32 of these purebred Crabbet horses.

The Crabbet Park Stud continued to run successfully once again for 12 years, until Covey found out that the government was going to build a highway from London straight through his property. It was too much for Covey at his age to start all over - and one of the saddest of all tragedies in the horse world occurred: after 93 years of selective breeding and history, the Crabbet herd was totally dispersed into the world in 1971.

The Crabbet horses didn't disappear, and though the carefully selected breeding program dissolved, and many Crabbet lines were subsequently lost or diluted, a few breeders continued to carry on the pure Crabbet tradition. Seren Arabians is one of these in the United Kingdom. Over 90% of today's Arabian horses in America has at least one ancestor that traces to Crabbet horses.

Today, as then, Crabbet horses are known for their even temperaments, hardiness, and athletic ability, carrying on the characteristics that were cultivated and refined over 100 years ago. 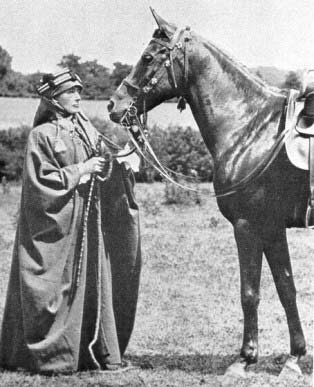 Today's photos from Seren Arabians here on Endurance.net
Posted by The Equestrian Vagabond at 1:02 PM