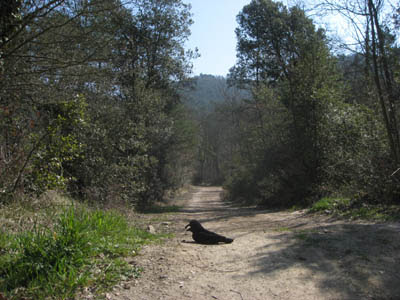 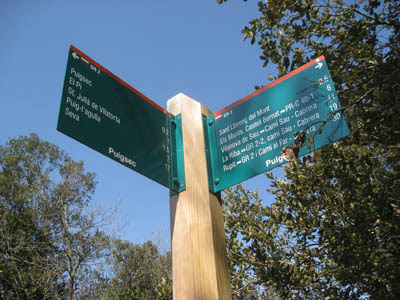 Step outside in the morning on the balcony of El Moli (the Mill) outside of the small village of San Julia de Vilatorte in this corner of Catalonia, Spain, and breathe deeply of the crisp clean air under the bright early sunshine. it is bracing, fragrant with spring and a nuance of... pig doo.

This area produces a lot of pigs, and I dare say, a lot of pig fertilizer that is used on the ample farmland. It's not enough to make you gag, but just enough to put a slight crinkle in your brow, or raise an eyebrow, or wrinkle your nose just a bit, depending on which way the wind blows.

Put on your hiking shoes, grab your backpack and your walking poles (or, in my case, the Raven), and head out across Spain. Or Europe, for that matter. How about destination: Poland, or Norway?

I started right outside El Moli, walking the Ruta dels Moulins trail along the creek, which soon joined up with the GR2 Footpath.

The GR Footpaths in France and Belgium (Grande Randonne'e), Holland (Grote Routepaden), Portugal (Grande Rota), and Spain (Gran Recorrido) are a network of long-distance hiking trails in Europe, that are connected with the European "extremely" long-distance footpaths, covering 60,000 km, that will take you in every conceivable direction over Europe: middle of Norway to the middle of Italy, tip of Greece to the bottom of Spain, Ireland, Great Britain, top of Finland to tip of Turkey, Portugal to Estonia or Poland.

Designed by the European Ramblers' Association, founded in Germany in 1969, today it is composed of 50 ramblers' organizations from 26 European states, with over 5 million individual members. The local ramblers' organizations maintain the paths, markings, huts and campsites along their routes, some of which have been in existence for over 100 years; work on preserving rights of way; and promote the history and culture of the areas through which the trails pass.

The trails vary from forest trails to paths along fields, roads through villages, dirt roads between fields; past old Roman ruins, old mills, castles, farms. You can follow the silk routes of Europe, the Troubadour routes, the European parks and Garden route, the Wenceslav route, or the Hanseatic route.

Simple markings indicate the route, on tree trunks, rocks, walls, signposts, or on the ground, of (most often) red and white paint: white stripe over red stripe indicates the correct path; a red and white "X" indicates the wrong direction. They aren't always easy to see, (for instance, sometimes a tree trunk is overgrown by vines), and sometimes you take a wrong fork in the trail or road a dozen yards before turning around to try another fork or two until you find the correct way.

The Raven and I followed our GR2 path skirting Sant Julia on side paved roads, then onto dirt roads and trails between planted fields. After we passed a private castle and some old pig farm sheds, the route began climbing, until we had a decent view of Sant Julia in the distance below us.

I don't think horses are prohibited, although I didn't see any signs of horses; though on another part of the GR2, Paul used to ride his New Zealand horses. That was a good long stretch, and good underfoot, though the area I walked had a lot of pavement, and plenty of stones on the trails. I met two other walkers today, and have seen bicycles on the trails also.