One of Those (Shoe) Days 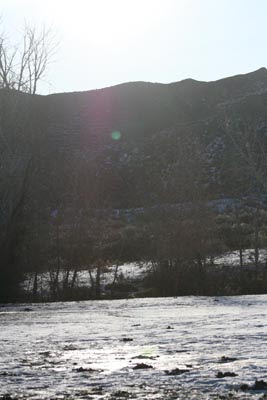 It was one of those days - 30 degrees and breezy, 17* with the wind chill. Still some snow, and a lot of ice on the frozen ground. 6 horses to shoe or trim. Well, it was better than last week, where it was about 28* with a much stronger wind, snow blowing sideways, making us wimp out to where we postponed the shoeing for a week.

Today we went under the roof of the hay barn and used the big hay bales for a partial wind block. Definitely "partial." I had 5 layers on top, 2 on the bottom, hat and gloves, and as long as I had my back to the wind coming around the corner of the bales, my body maintained at just over freezing. Feet and hands, though, that was another matter. My feet turned numb over a few hours, and my fingers wouldn't work - had a hard time tying and untying the halter knot.

It was one of those days for the horses, too. The first one, Finneas (used to lots of uncomfortable handling, what with his big Back Leg Accident) was fairly good, even though his as-yet-to-fully-heal-cut bothered him as Bruce held that leg up. Quickie, the last one, was fairly good - she fidgeted constantly for me, but was still whenever Bruce held a foot up.

Dudley was a butt - not so spooky but objecting to having to stand still and have his feet worked on. After months of dieting, Bruce noticed how good he looks, having lost a good 100 lbs, and his feet look good enough to put shoes on him. Which Dudley was not thrilled about.

Mac, normally quiet, was quite jumpy.

Princess didn't want to walk near the barn, convinced there was a cougar across the creek in the bare swaying tree branches.

Diego - my sweet little brave Diego! - wigged out walking close to the barn (of course they never do this when they are walking or running or romping by on their own), sure that Princess had been right about a cougar. He about ran over us a few times while working on him.

The horses ran one by one, skidding on the ice, as they were turned loose, back to the comfort zone of the hay bales, far away from the cougars in the windy trees by the barn.

I was a frozen popsicle and couldn't feel my feet when I hobbled back in the house. I stuck my feet right on and in the stand-up heater for a half-hour till I could feel them, then took a long hot shower to completely thaw, then had a nice cup of steaming French Vanilla coffee.
Posted by The Equestrian Vagabond at 10:37 AM

merri.. sounds exactly like the weather here.. .GaZi was a real trooper tho... It was only -2 in the a.m. You get serious points though!

Cid and GaZi in Montana