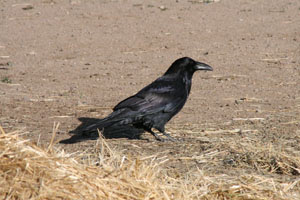 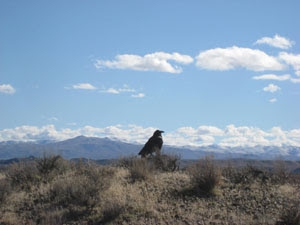 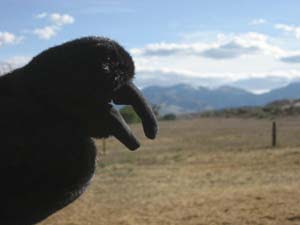 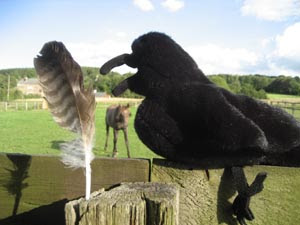 Without trying today, I saw: a bald eagle, 2 red-tailed hawks, several kestrels, ravens, and magpies. The bald eagle was impressive (and not so common around here; we mostly have golden eagles), and the flashy, iridescent, long-tailed magpies are entertaining to watch - sometimes they like to play around and on the horses.

But of course it's the Raven that I'm obsessed with. Who wouldn't be, with all the history and mystery and myths of Ravens down through the ages and different cultures:

In Norse mythology, Odin, the father of the Gods, had two Raven informers, Hugin and Munin.

In Celtic mythology, Branwen, Goddess of love and beauty can take the form of a white crow.

In several Pacific Northwest Indian cultures, the Raven is revered as the creator of humans, or the one who found the first humans in a giant clam shell and let them out; the stealer of light (he stole the sun from a greedy man, and put the sun, moon, and stars in the sky for humans); a perpetual trickster, and a storyteller.

In Arabic, the Crow is "Algorab." My friend Maryanne in Egypt lives right by the partially buried ruins of an ancient sun temple, Abu Ghorab. It is rumored to be one of six sun temples, only 2 of which have been discovered so far. Abu Ghorab means "Father of Crows." In Egypt, crows are a nuisance to the farmers. Farmers try to scare them away or shoot them, so the clever crows hang out during the day at the trash dump and other places away from humans, and in the evening they fly one by one to hide behind the sun temple. There they wait until the call to evening prayer, when they fly into the orchards at the edge of the desert to roost, because they know people are at their prayers. : )

In several cultures, the Raven and crow were originally white.

In Australian Aboriginal legends, the crow turned black after he wrestled with a hawk (they fought because the crow would not share his meal, as they had agreed to do) and rolled in the black ashes of a campfire, which never washed off.

In ancient Greece, the White Raven was a sacred bird and messenger of Apollo, the God of light, sun, music, poetry, and fine arts. (In some myths, it was a crow.) But, due to some mischief the Raven got into, as Ravens are wont to do, (depending on the tale, either narking on Apollo's wife, or mistress, or it didn't fetch water quickly enough for Apollo), Apollo flew into a rage, as Greek Gods are wont to do, and turned his white Raven to black.

And I came across this nugget from this spring: a clutch of white Ravens were abandoned by their parents and rescued in a churchyard in England - see link at bottom.

Any Ravens I see here at home in the canyon, I think one of them must be Hoss, one of the baby ravens the neighbors Linda and Mike and Carol raised last year. Especially when even I can get fairly close to him without him being very concerned. Maybe he's a distant descendant of one of the Ravens in myth and legend, comfortable being around people and Gods.

Then there's always the Raven II, popping up at random places.


See the 3 White Ravens in England
Posted by The Equestrian Vagabond at 11:31 AM

Woohooo....I see that The REAL Raven chased off the fake and claimed his territory! Good Job!

Nice pictures Merri thank you. What a beautiful sunny day!