Eagle and a Hurricane Sunshine and a "breeze" was sweet redemption for Layne Simmons' Eagle Canyon ride this year, after last year's dismal weather scuttled attendance in her first time as ride manager. We're lucky to be able to ride in this area, which is on private land and which has been closed off to most activity, due to people (mostly not horse people) trashing the area.

Where the rain/sleet/wind/mud/muck caused about half of those signed up last year to opt not to ride, this year, all the Ridecampers who showed up climbed aboard their steeds for Saturday's 25 and 50.

The Pickett Crick Invasion stormed the Eagle trails. Steph/Smokey, Carol/August, Connie/DWA Saruq, Sarah/Dezzie hauled up Friday afternoon. Regina kindly hauled Linda/Ted and me/Phinneas (Connie's horse) up eeeeearly Saturday morning. Which meant my alarm going off at 4 AM, saddling up Phinneas in the dark, loading him up, picking up Linda and Ted down the road, and Regina driving us to Ridecamp, arriving at 7 AM. Perfect getting-an-early-start training for a 100-mile ride! Which, no thanks, I have no aspirations to do.

Double last year's attendance hit the trails Saturday: 26 in the 50 miler at 8 AM and 18 in the 25 miler at 9 AM. Forecast was for plenty of sunshine and "wind," increasing throughout the day. They could have just gone ahead and called it a "hurricane" and said that it would start early. For the first loop of 25 miles there was a hurricane a'blowin' on top of those Eagle foothills. Nobody in Ridecamp noticed, at first, since last year's weather was on everybody's mind. It was sunny after all! Phinneas, Grandson of the Black Stallion (as Connie will remind you) is 18 this year, and just tough as snot. He's a Blusterufagus, always full of himself, much more so if he's ridden in company. So I rode him solo, trying to stay far enough back of his crick herd mates that he wouldn't have anything to prove. So Phinneas and I battled Mother Nature's elements together. The Eagle foothills were rife with spring grass, layers upon layers of green, with plenty of snow on the Bogus Basin ski hills to the west (the resort was actually open for skiing this weekend, due to another dumping of recent snow). Trails were fabulously marked, and ride manager Layne rode the 50 in front of the pack on the first loop, checking trail and adding ribbons or flagging where necessary. She even rode with a terrical painful bruise and stitches in her leg, a present from a rambunctious good-spring-feeling horse a week ago.

Eagle is not an easy ride. There are a *lot* of hills in this ride (though less than there used to be!), and *lots* of badger holes to dodge. A fit horse helps, and also one that pays attention to where he puts his feet (or listens well to you telling him where to put his feet). 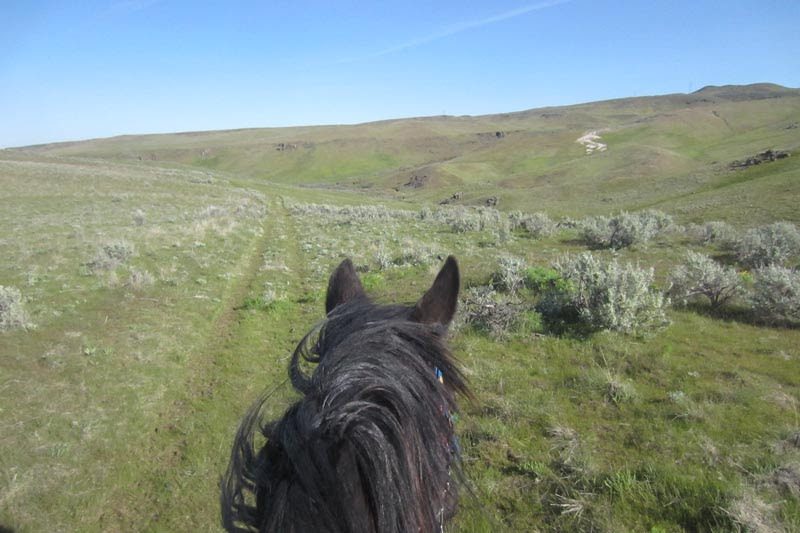 And really, the wind was terrific on the hilltop trails. Almost flabbergasting at times. According to my calculations, and how I felt at the end of the ride, each mile ridden in the hurricane winds was equivalent to double miles. So my 50 on Phinneas felt like approximately 75 miles! On the first loop, which started out south of camp, and made its way east, then west, then south before returning northward to camp, had me buffeted from any and all sides by the gales. Since in one direction I was literally leaning at an angle into the wind so I could stay on my horse, I was worried I'd make Phinneas sore on that side of his back. But no worries, going the opposite direction, I was leaning the opposite way, so that evened out. I tried leaning down over his neck at times, and then I found the gusts were knocking him around too.

The wind started to drive me a little insane at times. And thank goodness this horse is TOUGH and doesn't get scared at big wind. Wind was roaring so hard and loud I couldn't hear myself talking to Phinneas. Wind was blowing so hard it blew snot out of my nose. And after it did that, the wind blew down my nose and throat and out my mouth. It's rumored two juniors blew off their horses, which is easy to believe! Anyway, it was just windy.

And I'm sure I had WIMR because of the wind (Wind Induced Mental Retardation). When Phinneas and I got into camp for our first vet check, we stopped at the wonderful tub o' slop (water and oats, apples and carrots, and maybe wheat bran), right by the vet line, and waited 5 minutes for Robert to vet us through. Then I realized I had not even checked in or gotten a pulse. I'd stood there so long that Finneas' pulse was 48. So I checked in before going back to vet. After the second 14-mile loop, with the WIMR still rattling about in my head, I timed in and got Phinneas' pulse checked… then went to my trailer for the half hour hold. When 30 minutes was up, I mounted up, checked with the timers and headed out. Robert hollered at me before I rode out of camp; I turned around and rode up to him, and he asked, "Did I vet you through yet?" Oops! Totally forgot to vet my horse! It was the wind, I swear! That and getting up at 4 AM, which is not my best time of day.

Phinneas and I finished our last 11-mile loop, completing the ride next-to-last place in 9 hrs 11 minutes. We had a fun ride despite the wind, and big treat was the badger we saw on the last loop. Normally nocturnal creatures, we startled one outside of its den. It froze and hissed at us from 50 feet away… Phinneas had never seen one before and he was impressed with its ferocity.

Dean Hoalst and Pay Attention won the 50 in 6 hrs 9 minutes, and they got Best Condition. All but 1 rider finished the 50.

Joan Zachary and Chico finished the 25-miler in 3:40. Third place Siri Olson and EZ to B Perfect got Best Condition. 14 finished out of the 18 starters.


Posted by The Equestrian Vagabond at 5:42 AM