It's hard to believe it was only DeWayne Brown's second time to manage an endurance ride, but so it was on August 13th at the 30-50-80-100 Santiam Cascade near Sisters, Oregon. 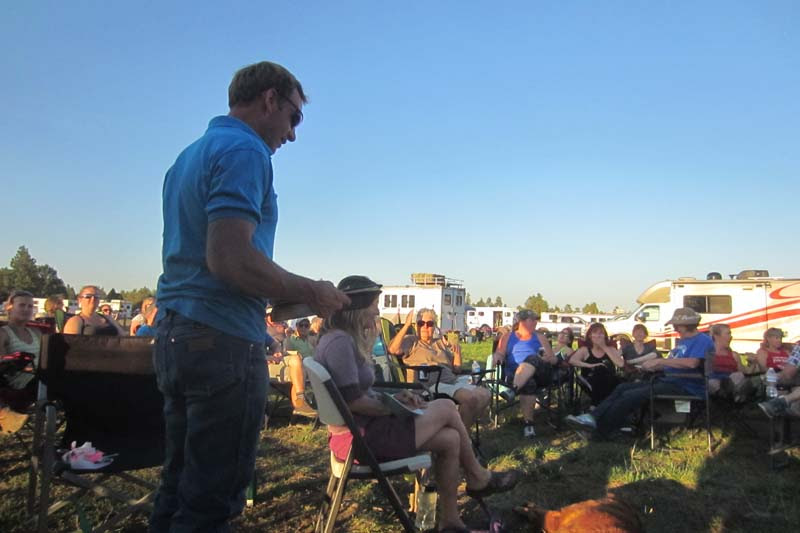 What was the best part? Hard to choose between:
- lush grass/hay field to camp in, and an eclectic smorgasbord for the horses including yummy alfalfa plants (made me think of wandering a CANDY SHOP and eating whatever I wanted), AND there were no bugs or dust
- a good attendance with old and new friends, including a World Endurance Champion and Hall of Famer and Haggin Cup and Tevis Cup winner (Becky Hart); another couple of Hall of Famers (Joyce Sousa and LV Integrity), a National Champion (Christoph Schork), and another Haggin Cup winner (Barrack Blakeley), and 3 Juniors in the 100, Anya Levermann, Sanoma Blakeley, (riding with Anya's mom Katrin) and Alex Neihaus (riding with grandmother Joyce Sousa)
- extraordinarily well-marked trails
- the best human drinking water idea ever invented, jugs of people water floating in the horse water troughs, which kept the water cool on a hot day
- plenty of horse (and therefore human too!) water on trail, every 5 or 6 miles
- the best water guy(s) who worked 3 or 4 days non-stop for us riders and horses
- numerous volunteers to help you out with anything you needed
- and the extraordinarily competent ride manager who seemed to be everywhere at once taking care of everything before it needed done 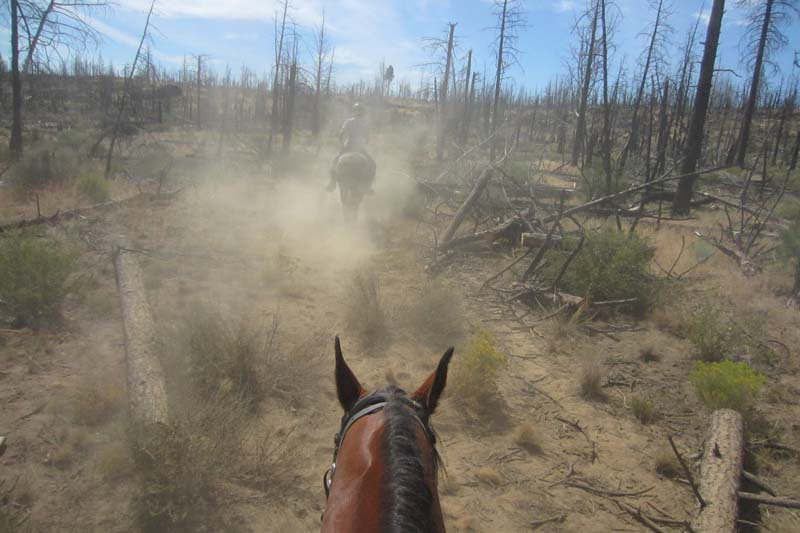 And I must give a great shout out here to Lynn Rigney, my new best endurance friend. How fortunate for me that she came to ride her handsome mustang Adagio VII in the 30, and she saw how HOT FLASHING I was, even in the heat at the Friday ride meeting, and she loaned (then gave) me her Mission Enduracool neck gaiter, (which I have not taken off since), which saved me from passing out from heat during Saturday's ride. Thanks Lynn!

DeWayne's grandfather started the Santiam ride in 1964. His whole family has been a part of this ride, putting it on and riding in it over the decades. DeWayne managed it in 1993, a memorable multi-event (a 50, 75, and 100) that had 227 entries. That was a memorable event for veterinarian Dr Michael Foss, too, due to the unexpected number of entries, but while this year's ride had good attendance, it was a bit less stressful for him and DeWayne than that one!

Basecamp was at the Sisters rodeo grounds outside of Sisters, Oregon. Camp Polk was established in 1865 in the area as a military post because of the Paiute Indian wars. Turns out there really wasn't a Paiute Indian "problem" in the area, and the troops abandoned the camp within a year. Around 1870 Samuel Hindeman homesteaded there and ran the post office. In 1888 the post office was moved 3 miles southwest to the present site of Sisters.

Sisters used to be a sleepy little town until the last decade or so when it exploded into a big tourist attraction, with tourist shops, outdoor opportunities (hiking, biking, climbing, skiing), the Sisters Rodeo (held since 1941), the annual Sisters Outdoor Quilt show (the world's largest outdoor quilt show and quilt sale), and the Sisters Folk Festival. Ridecamp was close enough to the main highway that we heard the busy 24-hour traffic, though Connie tried to convince me that it sounded like camping near the ocean and listening to the waves. (Didn't work the first night.)

Looming above the town, and ridecamp, are the Three Sisters, a complex single volcano of 3 volcanic peaks, all over 10,000 feet (still with a significant amount of snow on them) - North, Middle, and South Sister. USGS tells us, "The Three Sisters region has hosted volcanic eruptions for hundreds of thousands of years, and future eruptions are a certainty. South and Middle Sister are recurrently active over thousands to tens of thousands of years and may either erupt explosively or produce substantial lava domes that could collapse into pyroclastic flows. They could also produce lava flows."

How often and how many places do you get to ride around scenic, certain potential volcanoes?

Pickett Cricksters Steph and Smokey, Connie and DWA Saruq, and substitute jockey me and Dezzie made the journey from Idaho for the 50 mile ride. Connie's niece Sarah couldn't make it to this ride so I rode her horse.

What was fun about the ride was that the loops were arranged so you would meet other riders on other distances throughout the day. If you rode the 50, you could keep tabs on the 30-milers, and on the 17 100-mile riders, and it was easy to cheer them along and high five them as we passed each other. We ran into different groups at different intersections, sponging and cooling at the water troughs, like Canadians Katrin (mom) and Anya Levermann, riding the 100 with Sanoma Blakeley. And it was a bit dusty, with some rocks underfoot. Some riders rode like bandits, with neckerchiefs over their faces. More than one rider commented after the day's-end shower about how brown the run-off water was! 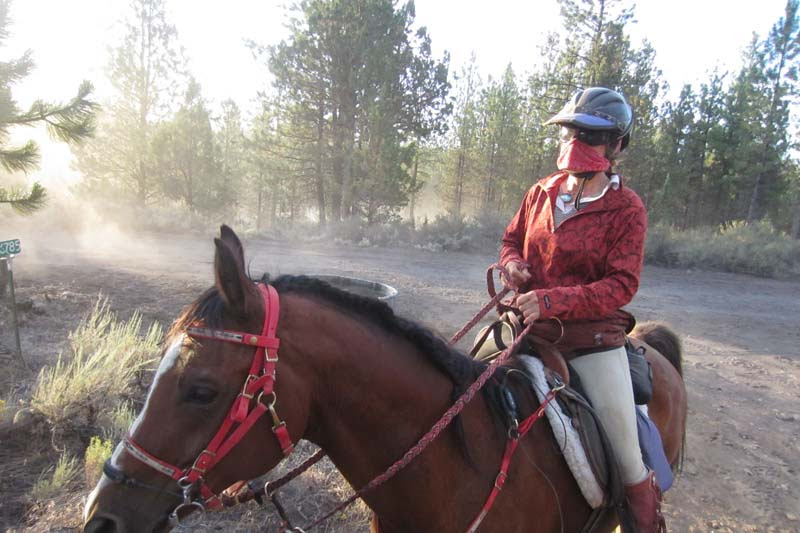 It got hot after noon, but two saving graces were a thin cloud cover and a good breeze (and splashing humans and horses at the water troughs) which kept us cool enough and moving along.

Jeff Tryens and Cimarron won the 30-mile ride in 3:24, and got Best Condition, with 26 riders finishing.

Barrack Blakeley and OMR Quicksand won the 50 mile ride in 5:44. 31 completed the 50 (around 37 started). Kristen Grace and HCC Elessar, aka "Monster", who finished second 8 minutes behind Barrak, won Best Condition.

Nobody rode the 80, probably figuring if you were going to ride that far, you might as well go another 20 miles and do the 100! Christoph Schork and GE CCDRUS Star won the 100 in 15:56. They also won Best Condition. The 15-year-old Anglo-Arabian mare now has a record of 23 completions in 24 starts (8 of them wins), 7 Best Condition awards, and 4 out of 4 100-mile completions, including 2 Tevis Cups. Finishing next, to their happy surprise, were Sanoma Blakeley and the Levermanns. Joyce Sousa and her granddaughter Alex finished in just over 17 hours. That makes 39 100-mile finishes for LV Integrity (oh, and 89 for Joyce, if you're counting!). All 3 Juniors finished the 100 (Sanoma, Anya, Alex), and Anya and Alex are currently tied for first in the Junior National 100 Mile division with 405 miles.

Front runner Dick Root (riding the little pistol mare OFW Alivia, who won the Mt Adams 100 in May) succumbed to the heat in the late afternoon (Dick did, not the horse), and front runner Kevin Waters and DE Golden Ali were pulled with 1 loop to go with lameness.

Layne Lewis' Royal Immage, aka "Mickey", finished 6th, completing his first 100 mile ride. Becky Vital and CR Dun Debut finished turtle in 18:57, the mare's first 100-mile ride, and Becky's first 100-mile finish, a great accomplishment for both after a bad accident last year put them both out of commission for a while. DeWayne says he's looking into a different ride camp for next year's Santiam with some different trails. Whether it's the Sisters Rodeo grounds or elsewhere, you can be sure that it'll be a first-class-run event. Come get your endurance on in this long-running endurance ride!

For more info and photos on the ride, see:
www.endurance.net/international/USA/2016Santiam

Posted by The Equestrian Vagabond at 6:39 AM

Very nice write up and pictures. Made me feel like I was there except I didn't get all worn out and dusty.