I am referring, of course, to "FIVE THOUSAND" as the F word. (Now, what were you all thinking?)

That's what was on the line for Lee Pearce and Fire Mt Malabar at the 3-day City of Rocks ride June 9-11 in SE Idaho. Of course, the "F" word was not uttered by anyone before 4 PM on Saturday. But that's getting a bit ahead.

For the 5th year, the Oreana Pickett Crick gang hauled everything, including the kitchen sinks (seriously, in the cook trailer), 4 hours away to City of Rocks National Reserve in southeast Idaho, to put on the multi-day City of Rocks Pioneer endurance ride. One of those years we did it twice, 6 weeks apart, for the multi-day then the AERC National Championship. We've about got it down now. This time I think collectively we only forgot a bottle of hand lotion and a bar of soap.

This year, honorary Pickett Cricksters Matt and Terrence Nicholes came along as the Super Help. And we will never put on the ride again without them! Attendance was good, and the weather was good if you consider nobody got caught riding in thunderstorms (except for Connie, who got caught in one AGAIN, on a training ride on Monday before the ride started). It got pretty warm and muggy on day 1, but cloud cover and breezes helped on days 2 and 3.

Day 1's trails headed south into Utah through the little farming community of Yost. Located in a farmed valley below the Raft River mountains, surrounded by many of the old wagon trails that immigrants followed westward in the late 1800s, the first known white settlers in this valley were cowboy and cattleman Charles Yost and farmer Levi Nelson Campbell in 1879. The community officially became Yost in 1890 with the establishment of a post office.

Around 1880 Fannie Marilla Garner Tracy and her 8 children had settled in the area. Descendants of the Tracy family remain in the area; the Tracy General Store in nearby Almo has been in business since 1894 (originally owned and operated by the Harry and William Eames families). It's eligible for the National Register of Historic Places.

Christoph Schork on GE Pistol Annie and Jill Haunold on Solara SS tied for first place in the 55 miler in 5:00 flat, with Solara SS winning Best Condition. 26 of 29 finished the ride. 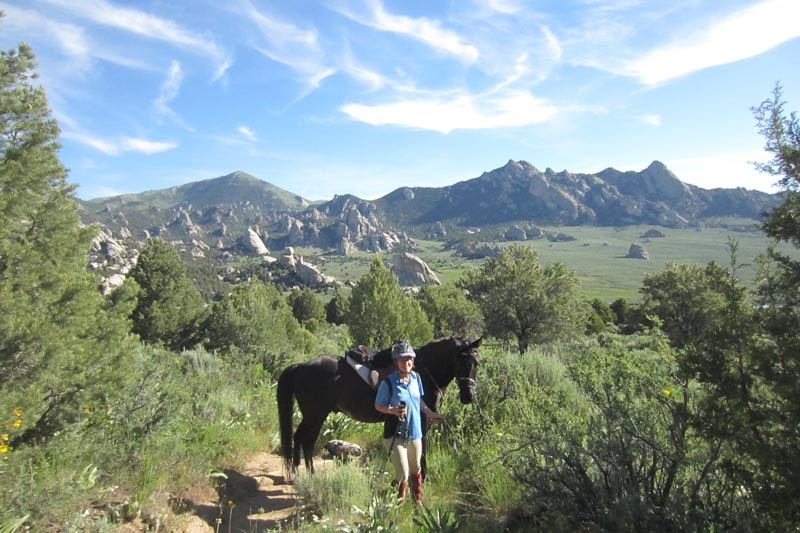 Day 2's trail took riders through a part of City of Rocks National Reserve, and to and around Castle Rocks State Park.

The racing mules were on hand for the LD, with Jill Hedt and the mule War Eagle winning in 2:58. Trinity Jackson escorted a slew of Junior mule riders to second through sixth places. War Eagle won the Best Condition award. 25 of 26 riders finished.

Day 3's trail covered the height and breadth of City of Rocks National Reserve, climbing to Indian Grove at 7500 feet, and following the historic Emigrant and California Trails through the park.

All 24 starters finished the LD, with Kathleen Hite, riding the horse An Instigator FA, edging out the mules to win in 2:42. The slew of mules finished second through sixth again. Three first timers from Mackee, Idaho, finished eighth through tenth, and their horses - an Araloosa, a Quarter Horse, and a gorgeous dark palomino Morgan - were superbly condition and smartly ridden. Lenie Wilkie, riding Trigger, won Best Condition. 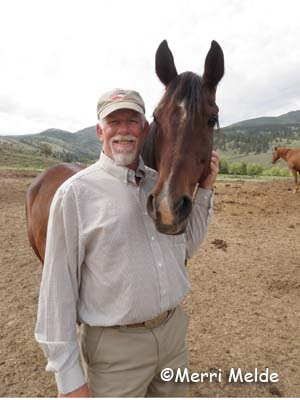 And this is where the "F" word comes in. When Lee Pearce and Fire Mt Malabar crossed the finish line in 14th place in a time of 6:15, and passed the vet check, the 18-year-old gelding reached the laudable Five Thousand AERC mile mark.

Only around 300 horses in the sport of endurance have reached the remarkable 5000 mileage plateau; and Fire Mt Malabar has done his with a heavyweight rider. The 18-year-old gelding now has a record of 88 completions in 94 starts over his 10-season career, with 42 endurance Best Condition awards (which is 3rd highest ever).

Malabar is by by Sierra Fadwah +/ , the first stallion to reach 7000 endurance miles, the Jim Jones Award winner in 1983, Reserve National Middleweight Champion in 1988, and 1992 AERC Hall of Fame recipient.

You can read a 2013 story on Lee and Malabar here.

There were a number of other happy incidents at this year's City of Rocks ride. A bit of impromptu music popped up in the evenings, featuring a grand reunion of U3: the Unofficial Unauthorized Uninvited Bluegrass band. We (Steph, Gretchen, me) morphed into the City of RockStars when we were joined by Connie Holloway, Terrence Nicoles, Clay Teeter, Robert Washington, and Anne Perkins and Jerry (a great duo on their own!).

Several newbies completed their first rides, and are candidates for becoming endurance addicts.

Eight riders completed all 3 days of the ride (3 in the LDs; 5 in the 50s). Jessica Huber and Channteuse had the fastest overall 3-day LD time of 12:01. In the 50s, Crockett Dumas aboard OT Rasa RSI and Terry Bannister aboard Ferrari had the fastest overall 3-day time of 21:56. Winning the coveted Getaway Horse/overall Best Condition award in the LD was Carolyn Roberts and Mac. Nance Worman and Amirah Khafazeh Bly got it in the 50s.

There were also a few minor casualties during the ride: on Day 1 Ericka from Nevada came off her horse and got a concussion on the first day and spent the night in the hospital; also on day 1 Drin from Montana got heat stroke on the first day (though she was able to complete days 2 and 3); also on day 1 veterinarian Robert Washington did a non-injurious but very humorous face plant in the extra tall green bunch grass while rescuing Drin; the Nicoles boys' motorcycle died; one of our ATVs died (R.I.P.).

But yes, we will probably rise to the occasion yet again to put on the City of Rocks ride.

It "is a must for any one mounted or a foot. Spectacular," Crockett Dumas said. "One of the most spectacular rides Terry Banister and I have ever ridden." And that's saying something, coming from Crockett, a legendary rider with over 41,000 miles of endurance!

Put this Fun, Fabulous, Fantastic, not-to-be-missed ride on your calendar for next year.

More coverage and photos are at
http://www.endurance.net/international/USA/2016CityofRocks/.

Posted by The Equestrian Vagabond at 7:35 AM