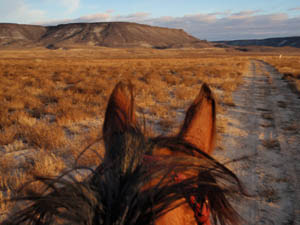 We've passed beneath it many times on horseback, its cliffs safeguarding the mysteries above. Why is it called Wild Horse Butte? Who named it? It stands sentinel over the Oregon Trail on its south side, and the Snake River on the north. A large, old weathered cairn marks a point on the northeast rim, visible from far away up and down the Snake. Did the pioneers name the butte? Did they see wild horses watching them from the cliffs as their slow wagons rolled by? There are rumors of an old spring or lake up on top.

While Jose has carried me enthusiastically around the base of Wild Horse Butte many times, I've often looked up and scrutinized it, searching for a way to hike up to the top that didn't involve ropes and pitons. On our last ride past there, the Owyhee Hallowed Weenies in October, I spied a route.

Carol and I hoofed it there on foot, approaching it from the southwest. We crossed the Oregon Trail that we ride along, and headed up a drainage chute where the cliffs had long given way to a steep but scramble-able path up onto the rim.

300 feet above the flats, we have a grand view of Owyhee: the broad Fossil Creek drainage to the southwest - which sweeps around both sides of Wild Horse Butte into the Snake River, and the snow-kissed Owyhee mountains at its head. Castle Butte to the east marks the passage of the Snake River from its origins in Yellowstone National Park. At this height, we are taller than the Canadian geese who fly in formations to the west (here they always seem to be flying west, to some mysterious tropical paradise in the wrong direction). The blue ribbon of the Snake River splashes a striking vividness among the muted winter desert hues. We see familiar landmarks in the distance, and from the different perspective of a bird: Fossil Butte, Sinker Creek; the Oregon Trail that leads into the West; the Bates Creek and Pickett Creek drainages in the far distance. We try to decipher the desert puzzle from above, which hills we ride around, which washes we cross, which rims we follow.

Visitors of the two-legged earth-bound variety up here are probably rare; we startle a 4-legged deer and a canyon wren. The rabbits remain hidden in the sagebrush as we tromp their trails along the circumference of the butte.

It is 3 1/2 miles around the edge of the rim. Evidence that cows occasionally find their way up here are in the old cow pies and the cheat grass that has taken over the top of the butte, as it has most elsewhere in this country (a product of overgrazing).

Down feathers stuck to bushes are evidence of meals that are consumed up here: perhaps the diner was a prairie falcon or a golden eagle from the Snake River cliffs or Castle Butte territories.

When you walk with your own two feet, you get to know a place more intimately, appreciate it more, and start to think beneath the surface layers. Walking the top of Wild Horse Butte, you see hints of layers of sediment - a layer of iron, a layer of shore-sand, a layer of river-washed smooth stones, beneath the volcanic layers. Looking down on the Snake River makes you wonder what it would have been like to see the creation of the Snake River Canyon, as the water from Bonneville Lake in Utah broke through its natural dam 15,000 years ago and rushed through this once flat desert.

And the more you see on foot, the more questions you come up with. We see scattered quartz crystals on random areas of the butte; why in these particular spots? (We finally default to the Raven explanation: it's the Ravens that place them there as artwork.)

And who built all the cairns on top? Some are small, the one is large and took some effort. Some of them are old, judging by the amount of moss growth on the stones. Are they ten years old? A hundred? The first stone on the bottom laid by pioneers in 1850, and the last stone on top laid by us today?

On the way down, two deer antlers left behind show that we are not the only ones who think this chute up onto the rim is a good way to climb to the top. From the top, I saw the trails like I've never seen them before. From the trail next time, I'll never see Wild Horse Butte the same way again.


**A footnote:
My friend Karen S corrected me on one incorrect assumption:
"The Snake River Canyon already existed before the Bonneville flood.  The flood scoured out the canyon, maybe deepened it a bit and left it looking more or less like it does now.  The flood did not create a new canyon over flat land."
Thanks Karen!


Posted by The Equestrian Vagabond at 9:17 PM