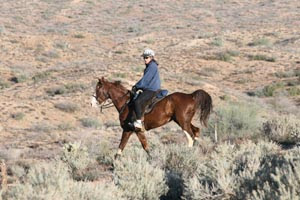 It was so cold this morning, that the water tank that Steve hauled all the way to the top of the climb on loop 1 was frozen. Fortunately there was a large puddle of ice - thick ice that took some serious beating to break apart - that yielded enough water for some of the 38 horses on the 55 miler to drink from. It was chilly, but the sun burned golden and bright for the third and last day of the Resolution Ride. Dennis Summers and "Lola" (OMR Tsunami) were the first up the hill, Dennis running on foot leading her. Dennis is a runner, having done marathons and Ride N Ties. For those people thinking that hot horses shouldn't drink copious amounts of ice water, Lola proved that theory wrong. She tanked up in big gulps before Dennis ran on with her, up and over and down the next hill before hopping on her to trot on down the trail back toward camp. Christoph Schork on DWA Powerball, and his gang of three were close on Dennis and Lola's heels, with Dana Weary and Maximum Heat next. Bringing up the rear at the top of the canyon was Kandace French and her lovely blond Tennessee Walker, Duke of Shadow Canyon. It was only their fourth endurance ride - their third being yesterday - and after finishing this one today and having a great time, you'll surely see more of them on the endurance trails. Laura Hayes, who flew in from New York, finally got to ride today. Somewhat coincidentally, she got to ride a Rushcreek horse owned by Jim and Cindy Brown. She is somewhat obsessed with them, having ridden many of them (including Rushcreek Nerf to a Tevis finish last year), owning several of them, and having visited Rushcreek Ranch in Nebraska many times. You know how a mother will pull out a wallet with dozens of photos of her child for you to see? Laura will open up her computer with folders and folders of eye-candy-Rushcreek horses from Rushcreek Arabians for you to look at.

This Rushcreek Thor happened to be one that Laura had bought 6 raffle tickets on, to try to win him at last year's AERC National Championship raffle. Jim and Cindy Brown won him, and Laura was the one who happened to drive him to the Browns. Today she and Thor finished his second 50 mile ride. Bruce Burhham of Manti, Utah finished his third day in a row on "Hotsie". Accompanying him on days 1 and 2 was a neighbor Sierra Cox on her first endurance rides on Bruce's horse "Libby." Sierra had been invited here by another Utah rider who'd backed out at the last minute, so Bruce offered her one of his horses. "Sierra grew up on horses, ran barrels, worked on a dude ranch, she breaks horses. I asked her, 'How'd you like to come and sit on a horse for 50 miles?' and she sat on one for 100 miles. Now she's hooked!" Dennis Summers and Lola won the 55 again today. When I asked Sue Summers about the mare's breeding, she said "Do you want my story, or Dennis'? Dennis says she's 3/4 Arabian and 1/4 Thoroughbred, but she's 3/4 Arabian and 1/4 Appaloosa, but Dennis won't fess up to the Appy." Lola was a little too much for her previous owners when Dennis and Sue got her as an unbroke 4-year-old four years ago, but she's turned into "a nice little horse." This was her fourth win in a row, and she also got Best Condition, her third one in her last four races.

All 20 riders finished the 25 miler, with Aileen Baca winning the 25, and her husband Leonard finishing second. All but two horses finished the 55. And so concluded the first 3-day Resolution Ride in sunny, hot chilly Arizona. There was plenty of weather to choose from, the trails were in excellent condition, the Sonoran desert scenery unique and spectacular - it was a great way to welcome in the New Year. Many more photos can be seen here!
http://www.endurance.net/international/USA/2010ResolutionRide/index.html
Posted by The Equestrian Vagabond at 2:31 PM