I turned the Gray Mare (named Perry) out with the whole herd today... and it was about as uneventful as it could get.

I timed it after everyone had had their breakfast, and it was time for a morning siesta as the sun rays crested the bluffs, starting to thaw the 8* morning and warm up furry horse hides.

Perry and her babysitter Krusty strolled out into the big paddock... and everybody just stood there in a sort of morning sun stupor, watching her.

Eventually, one by one, the horses moseyed up to her to give her the Owyhee Welcome (From most of them: "You're new. Get away.") No serious chasing though, no biting, only one or two squeals; and Perry mostly ignored them.

It's all about the ears - you can watch a horse's ears and pretty much tell what they're thinking.


Perry: Keeping an eye/ear on Jose, but not worried. Jose: Interested! Perry: wary of Ted. Ted: Doesn't particularly like her. 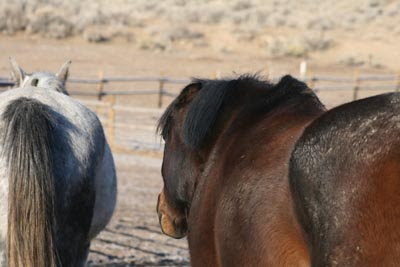 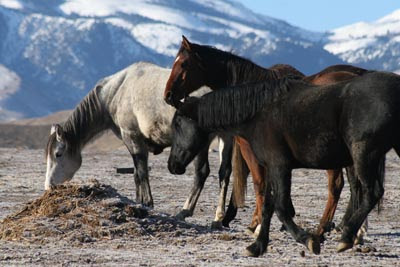 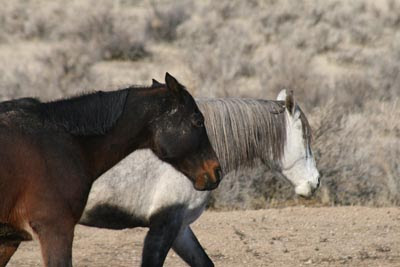 Perry: uninterested. Jose: still interested! (Later I saw him trying to get her to play!) Give her a few days... and she'll slip in with the herd like she's always been here.
Posted by The Equestrian Vagabond at 5:16 PM