Lest you think it's just the boys that rule the roost at Seren Arabians, there are a couple of gals that need mentioning. Winter Queen, (by Silvern Idyll out of Queen of Diamonds), 21, is over 90% Crabbet, and was bred by the Duchess of Rutland, and bought by Seren Arabians in 2005. She's the dam of Seren Procyon (by Hanson) who, in August of this year, graded with the highest score for a 3 year old in the endurance section of the BEF Futurity performance grading, with a "higher first" premium, just 0.07 points below the score for "elite". 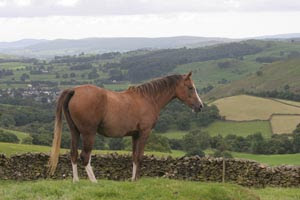 Winter Queen is also the dam of 2-year-old Seren Bellatrix Malika (by Hanson). She's over 90% Crabbet. 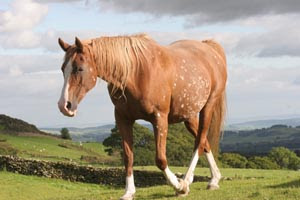 Shadowed Gold, 19, (by St John out of Magic Moonshadow), is 100% Crabbet. She came to Seren Arabians with Winter Queen in 2005. Since arriving here she has produced Seren Hanau in 2008 (by Hanson), the colt which the Atkinsons think will be Hanson's successor as primary stallion. She currently has a colt by her side, Seren Winged Shadow, by Winged Saint. 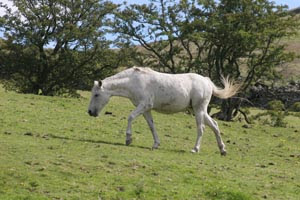 Seren Canopus Hanifa, 14, (by Hanson out of Hamatan), is 100% Crabbet, bred by Seren Arabians. She has been bred to Winged Saint. 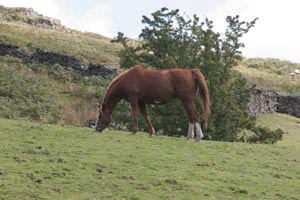 Silihah, 18, (by Silver Fahd out of Malihah), is 100% Crabbet. Seren Arabians got bought her in 2005, as part of the big push to get more 100% Crabbet breedings going, when they heard that 53 Crabbet foals had been born in the time it took for 200 Crabbet adults to die. She's the dam of Seren Hanag (resident 2-year-old colt) and Seren Hanos (yearling colt living in Idaho with the Yosts). Silver Serendipity, 4, (by Winged Saint out of Silver Ingot), is 100% Crabbet. Silver Ingot was treated for colitis for several months - and her gut problem turned out to be Silver Serendipity! (The mare's pregnancy had been mis-diagnosed.) Seren Arabians bought both the mare and foal when Serendipity was two. She's four now, and Silver Ingot is 27. Silver Ingot is a near perfect Crabbet horse, in Jan and Dom's eyes, and they have her down south at a facility where they would love to get an embryo transplant with her... Seren Capella, 10, (by Hanson out of Seren Sirius Blue Lightning - who's out of the Seren foundation broodmare Blue Bandaila) is a high percent crabbet mare. Jan and Dom bred her, though she is now owned by Rebecca Kinnarney. She won the 2-day Exmoor Experience last year, completely barefoot, and she now has a filly foal by Winged Saint by her side.

The girls are a feast for the eyes, too. Who would you choose, if you could ever convince Dom and Jan to sell you a horse?
Posted by The Equestrian Vagabond at 2:11 PM