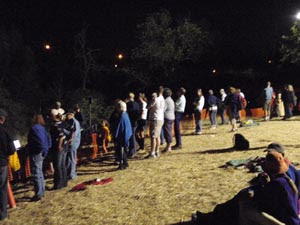 ...And now we wait. Our riders are out at 8:30 PM onto the California loop, from Foresthill heading to Auburn. In between are 32 miles of switchbacks, cliffs (slip-and-fall-and-you-die cliff trails), pitch darkness, moonlight, rocks, dust, maybe some hallucinations, that godawful forever-long never-ending 17-mile stretch to Francisco's, the American River crossing, and just maybe that last magical 4-mile stretch to the lights of Auburn and the finish line by 5:15 AM.

Our riders won't be in for approximately 8 hours. We pack up and leave Foresthill, and by the time we are pulling into the Auburn fairgrounds 20 miles away after 10 PM, I get a tweet saying the finishers will be in any minute. The finishers!

Bruce drops me off and I hoof it with effort (it's still warm and muggy in Auburn at night) to the finish line. I've already missed the finish, but I make it to the vets to watch John Crandell trot out Heraldic, and Shannon Constanti trot out LR Bold Greyson - and we have the first and second place finishers of the 55th running of the Tevis Cup - a feat Heraldic and John duplicated in 2006. Our riders, Nance and Steph and the Yosts will be over six hours behind the winners - a fact I found astounding when I rode it last year, because the whole 100 miles I felt we were riding so fast the entire ride. Any horse that finishes Tevis blows me away, so there really aren't words for winning horses like this. The next riders were nearly 2 hours behind them.

I went to our camping spot in one of the parking lots to help Bruce set up the pens. Bruce and Nance had tried keeping Quinn in a stall after they finished Tevis in 2007, but, not being used to a stall, Quinn spent the whole next day rather traumatized, stuck to the door of his stall with his head out looking worried, and not eating or drinking. Last year and this year we went for the parking lot. That's the only complaint I have about the Auburn fairgrounds - if you want to stake your horse out or high-tie him to a trailer, he's going to be on a cement parking lot, with no comfortable place to lie down. There are the sand arenas, but they are for sharing, and briefly turning horses into, not camping in. I felt bad for our horses because I was sure they'd have chosen to lay down at some point over the next 24 hours we'd be camped there... but the hard lot was better than a stall for our horses.

It was hell trying to pound holes in the cement to put up our stakes for the pens, and even more-so because I was starting to not think too clearly. The craving for sleep was starting to gnaw at my bones, fuzz the edges of my brain. After getting the pens set up haphazardly (mostly done by Bruce), I set up my tent (which seemed to take a long time) and crawled in for a couple of hours, though a sleep never came, and the dozing made me more muddled than ever. I so wanted to stay in my tent for several hours, but I had to be at the finish line to witness Nick Warhol and Forever Dawn, and The Raven come in.

I crawled back to my feet and staggered to the finish line around 2:30 AM to wait. There, those crews in the know had brought chairs, blankets, and sleeping bags to snooze and doze in until their riders came in. A couple of volunteers were manning the computers, keeping track of riders; everybody would come check on the status of their riders as the morning ticked away. Here I heard 12 horses had pulled at Francisco's, including front runners Melissa Ribley and Heather Reynolds. Nicole Chappell and her Golden Knight had also pulled here - they didn't finish Tevis this year, but Nicole had made it safely past those tens of miles of cliffs in Tevis that had haunted her the past several years. Victoria Saiita and her mustang Lakota had made it to the Lower Quarry - 94 miles - in their first Tevis and were pulled. Sue Hedgecock and Alburuke had made it to Chickenhawk at 64 miles before being pulled. Carla Richardson and SS Kharady Khid were pulled at Red Star Ridge at 28 miles when Khid mildly colicked the first time ever in his life, but Carla still expressed gratitude for the wonderful ride her wonderful horse had given her.

People waiting at the finish line snored, or murmured to each other with gravelly tired voices while playing the Waiting Game. I was looking around for Nick's wife Judy, to ask her when she expected Nick, but I couldn't find her... though I probably walked right past her. What I did see was Nance laying in a sleeping bag. What!? I almost yelled at her, but instead hovered over her, staring at her wondering what the heck happened. Was I sure that was Nance? Yes! That was Nance's face, that was her haircut and her blond/brown hair... and just short of shrieking at her "NANCE WHAT THE HELL ARE YOU DOING HERE SLEEPING!?" a kid sitting near Nance in a chair said, "Umm... that's my mom!" I looked up at him - huh? I didn't recognize him, and Nance didn't have a kid who had come with us... I mumbled my apologies and stumbled away to lay down, still trying to figure out how that woman could look exactly like Nance. I still to this day don't know if that was a hallucination or what...

Every once in a while the Finish Line volunteer hollered, "Horse Coming In!" Some people jumped up, some of us laid there and clapped and whistled, or continued dozing. It was getting painful to stay awake, but sleeping again at this point wouldn't make it any better, so I stayed up to cheer for those riders coming in (and nobody was pulled at the finish this year, Yeahoo!). There was Mr Hasumi, coming in at 3 AM - achieving his 7th Tevis finish in a row! Three minutes later two big strong brown and chestnut horses and smiling riders - Jennifer Neihaus and her mom Joyce Sousa! Forty minutes later another big cheer for the gal wearing the biggest smile on the planet despite her aching un-healed bandaged leg - Melissa Margetts! "It wasn't ME who really had the huge challenge. It was 100% Cabo!" she said later. "Cabo didn't dump my butt right there [on Cougar Rock] and high-tail it back to Auburn. He 'chose' to take care of me. GAWD I LOVE THAT HORSE!"

Five minutes later, at 3:48 AM - here came Nick Warhol and Forever Dawn - and THE RAVEN! That made TWO Tevis finishes for The Raven! (still happily strapped, tied, and taped in Nick's water bottle holder staring up at the sky.) In fact, that now puts The Raven five miles ahead of ME in AERC miles! I'll never catch up with him now!

At 4:03 AM - big cheers for Canadian Brook - carrying Barbara White to her thirtieth Tevis finish! I got choked up on that one, both when she crossed the line, and when I heard the cheers at the trot out a few minutes later.

The Yost family finished at 4:16, giving Gentry his first Tevis finish, junior Chandler her second in a row, and mom Laura her third finish.

And Steph and Nance were somewhere behind therm... so Bruce and I waited... and waited.

We cheered for Connie Creech (her 9th Tevis finish) and Dave Rabe (his 10th finish), and Wyoming rider Jack Evers and Baraka Musandi, who'd gone just overtime last year. And as the clock ticked toward 4:50 AM, we started to look at our watches. 4:53, 4:54, 4:55 AM... not here yet. The finish line crowd was starting to dwindle. Those of us remaining looked at each other... who was left? Who was going to make it? 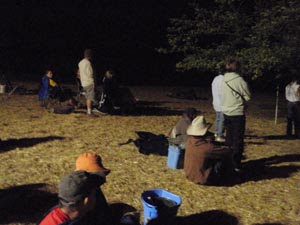 4:58 - "Riders coming in!" A bay and a chestnut - Steph and Nance! Rhett and Jazzbo trotted across the line as Bruce and I cheered and ran up to them. A big long drink for the boys and we headed to the vets and thought... this is it...

Rhett trotted out - sound - the vet said Congratulations, and Steph burst into tears. And when Jazzbo trotted out sound we laughed and cried and hugged and just about worshipped our horses. "He was amazing!" Steph said "He never ever didn't give!" Rhett had that look in his eye like - Wow, what a ride. 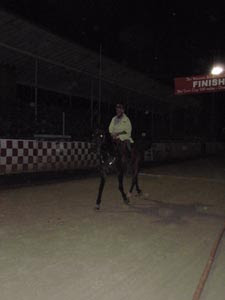 This challenging sport we do, this crazy ride called Tevis, and these amazing, extraordinary, wonderful, giving horses - they'd done it and done it well. Bravo! I fully enjoyed your crewing series....it was right on and had many delightful insights and observations. Thanks for the read.